Who Makes Mannequins in Egypt?

[Exclusive] We head to Al-Qalibuya to unravel the secrets of the mannequin-making industry in Egypt. 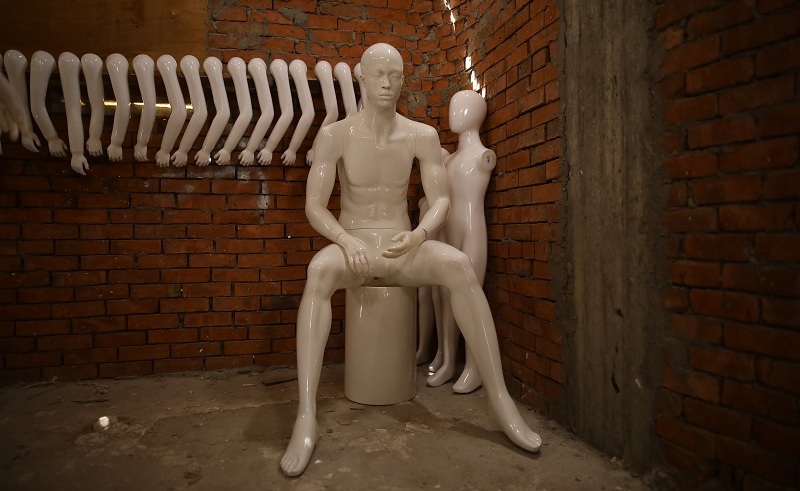 "Isn't it haram what you do?" is a question Hamada Elshebeiny, the owner of one of Egypt's few remaining mannequin-making workshops, has heard more times than he can count. In Islam, erecting statues resembling humans and other animals is believed to be strictly prohibited. Having been in the industry for twenty five years, however, finding another profession isn't really an option for Elshebeiny, so he sought to uncover the truth of said belief in Egypt's Dar El Ifta, which is where his fears were finally laid to rest.

"People started to make me doubt if all what I've ever earned is haram, but many Dar El Ifta Imams explained to me that this is nonsense, and that at the end of the day, we have to abide by the nature of the times we live in," explained Elshebeiny.

Elshebeiny was only 19 years old when he got into the mannequin-making industry. At the time, there was only one person, who he refers to as Hag Hosny, and who had mastered this rather unique profession and established Cairo's first mannequin-making workshop. Eager to learn, Elshebeiny quickly became a known figure in the industry, which is what prompted him to launch his very own workshop in the Al Qalibuya town of Al-Kharqanya, which is now the very center of the industry in Egypt. "As it stands, there are no mannequin-making workshops left in Cairo, even Hag Hosny's workshop now operates mainly in mannequin maintenance," elaborated Elshebeiny. When he made his debut into the industry, the material used then was mostly gypsum, which made it very fragile and prone to damage. It was then when competition peaked its head into the market in the form of cheap, durable Chinese-made mannequins. The need to keep up with this fierce competition grew, and gypsum needed to be ditched.

"When we decided to up our standards and start making mannequins that compete and surpass those imported from China, we found the solution to be in fiberglass, so we began using it instead of gypsum and it proved to be a success; the mannequins were lighter, looked better, and became much more durable. We were able to push back the competition but that didn't mean we should just relax." In his effort to stay at the top of the game, Elshebeiny realised that he should always present something new and unexpected. Every year, he would come up with a new design for his mannequins and begin marketing to his clients, which proved to be a successful strategy.

"The best and weirdest thing about my work is that it requires constant effort and a distinct artistic sense. I now make mannequins with different poses, colours and looks just so I can stay afloat."

But how much work can it be, really? Elshebeiny explains that there are ten stages to making a mannequin. The first is molding the fiberglass into the desired shape, after which it gets covered by wool to keep it intact while it blends together. Welding it is the next step before it gets carefully scrapped to remove any extra, unneeded material. Before smoothing its surface, the mannequin is painted with the desired colour, and afterwards it goes through a final checkup for any flaws. It's then given another layer of paint before getting a final check-up and getting packed into boxes. On average, it takes nearly two and a half hours to make just one mannequin. Elshebeiny's employs 10 workers at his workshop, each of which is specialised in one production stage of the mannequins, and that, as they found out, helps save time and produces better quality.

"Some have been working with me for nearly 15 years now, while the newest member of the team has been around for 5 years. I didn't choose to hire each and every one of them, it just so happened that when I was launching this workshop, my cousin started working with me and he brought a few of his friends, who in turn brought more of their friends, and that's how the team came together. We don't think of each other as anything but brothers, and no one ranks higher than the other as long as we all keep the best interest of work at heart," said Elshebeiny.

Despite his success, Elshebeiny doesn't intend to stop at just that. He now has his sights set on saving up enough money to build a big mannequin factory to compete with the big boys, Germany and France, which produce the world's highest quality mannequins.