In the heart of a village just outside Cairo, an entrepreneur is creating the modern version of the iconic tuk-tuk. Charlotte Swan heads to Kerdasa to meet the young man setting off to ignite an auto revolution. 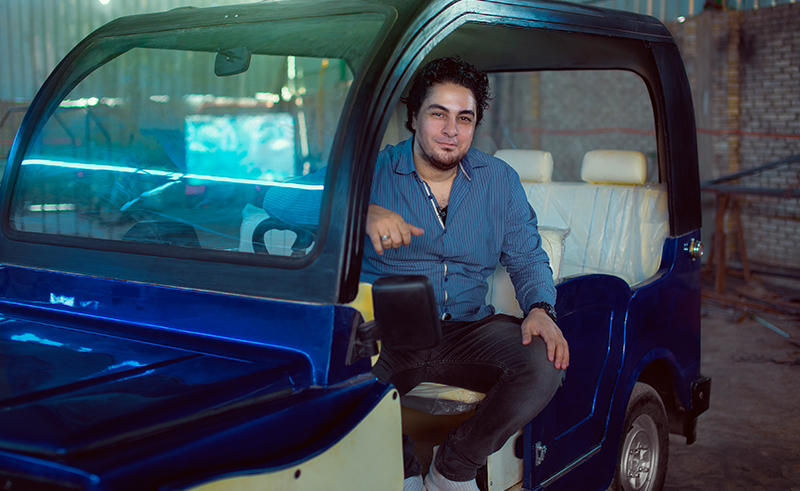 In a small workshop just 10 kilometres from the Great Pyramids, one Egyptian entrepreneur hopes to reshape the country's auto industry with his new mini-car, an innovation that challenges Egypt's reliance on imported light vehicles. It's a bright May morning and the streets are quietly humming with activity, just as the city is preparing for Ramadan. As we make our way through rural Kerdasa, we pass several tuk-tuks - the small black and yellow three-wheeled, four-seater 'baby taxis' so ubiquitous throughout Egypt. Could they all be replaced with the new car from Kerdasa? The village is well-known for its traditional crafts and textiles, but soon it may have a new claim to fame.

We reach our destination, on the corner of a dusty red road lined with old tires and languishing fragments of disembodied cars and trucks. The workshop we’ve heard so much about is a single massive garage with blue corrugated steel walls and roofing. We explore the premises as we wait for the owner, surrounded by the sounds of a small herd of camels lazily munching on hay outside the workshop. One of the camels appears to be a juvenile. None of them appear to be competent drivers.

The owner arrives, and we greet him in the parking lot. Ahmed Saeed El Feqi, the stalwart entrepreneur behind the operation, comes across as reserved and soft spoken. We follow him into the workshop, where several workers in sunglasses are welding, sending white-hot sparks arcing through the air. Spread throughout the room are about a half dozen golf-cart sized vehicles in various stages of completion, along with a small graveyard of tuk-tuk parts in one corner. El Feqi steps into a midnight blue mini car in the centre of the room, brushing a lock of dark hair off his forehead as he leans into the white leather cushions and starts to tell us the story of how he became an auto innovator. “I have a degree in law and Sharia from Al-Azhar University,” he begins, in Arabic. The statement comes as a surprise, given the fact that he’s spearheading an Egyptian auto revolution. “I never worked in my field - the field I studied. I worked for independent businesses and then in light transportation. I started gaining recognition for my tricycle modifications: adding fridges, or converting them into restaurants, or even garbage bins.” He previously owned a small company named El Wakeel, which specialised in light transportation, selling motorcycles, tricycles, and yes, tuk-tuks.

El Feqi, 35, became a careful observer of the general feel and needs of the local auto market, and the success of his niche modifications inspired him to design the small cars surrounding us in his workshop. “I started seeing how people fancied tuk-tuks in the Egyptian market because there were no alternatives; here, we are establishing local industrial competition with better quality and lower prices [than tuk-tuks, which are all imported],” he adds. According to Egyptian consulting firm N Gage, there are between four and seven million tuk-tuks spread throughout the rural villages and cramped urban streets across the country - El Feqi estimates them at six million - a vast sum when compared to Egypt’s total population, which currently stands at 95 million. Were these new tuk-tuk competitors designed by a former law student alone? El Feqi explains that the design process is, in part, democratic, and his team of technicians - altogether about 40 welders, mechanics, electricians, and glass cutters - votes on the best way to implement new ideas. “I tell them what I want to do and they tell me what would work and what wouldn’t,” he remarks, seated behind the wheel of his creation.

The car looks like it belongs in an auto showroom. The finished product is polished, attentively detailed, and carries an air of luxury absent from the familiar tuk-tuk. Compact yet roomy, it’s hard to believe that this six-seater vehicle is the same size as the teensy rickshaws often seen zipping through the crowded streets of urban Cairo. Called the Mini-Car Egypt, the new auto could be El Feqi’s solution to navigating neighbourhoods and villages. Though equipped with a motorbike engine and speedy in theory, the car isn't suitable for highways, but it can travel any place a tuk-tuk can.

The entrepreneur hopes to release the Mini-Car to the general market soon, though his company hasn’t been able to obtain the proper licenses for public sale in Egypt. Having followed all the licensing procedures, El Feqi has yet to earn the official governmental stamp of approval. “I didn’t go to them with just an idea, or say that I need financial support to proceed with this project – it’s the opposite. I came up with the idea, designed it, and financed it with my own money,” he points out. “I didn't ask for help or funding, and I brought it to life,” says the 35-year-old man, adding that the licensing obstacles and the cascade of public interest have been challenges for his company. “We’d been working on our own very well, but now the rate of orders has bypassed our production capacity. Before, all I wanted was the government's moral support, but now we need to be financed by the state in order to be able to raise our production level to meet our orders,” he divulges. For its small size, the workshop manages to churn out cars with surprising efficiency. The team can complete two or three cars in a day, but they tell us that with the proper machinery and resources, they could be manufacturing 20 to 30 cars daily. El Feqi stresses that the reason the car is called the 'Mini-Car Egypt' is because it is almost entirely locally-produced, from parts sourced and built in Egypt. Its only imported component is the engine, which comes from China. The cars are a source of national pride for their creator, who prioritises community good over profits as his main motivation. “It’s not just a project that would bring profit - it’s more of a moral revenue by solving a problem for people; it would be a national product for us and our country,” he claims, noting that Egypt annually spends about $250 million importing tuk-tuks. Building cars out of locally-sourced parts creates more jobs for Egyptians and supports the local economy, and they’re priced comparatively with the imported tuk-tuks, at about LE 35,000. “No one hates profit but there’s more happiness in relieving people and achieving the greater good,” he asserts.

Even though El Feqi’s car’s closest analogue is the tuk-tuk, he maintains that the Mini-Car Egypt is its own product with unique specifications, and he doesn’t see the two as being in direct competition. He tells us that its small form factor and strong chassis make it durable, its locally-sourced parts should make maintenance and repairs convenient, and its exhaust system was designed "with environmental friendliness in mind." An electric alternative is something they'd like to produce eventually, but the workshop isn't yet ready for that. The public reaction has been largely enthusiastic, and El Feqi proudly informs us that he has several hundred private orders from within both Egypt and Sudan, and has even received some governmental inquiries. He is thrilled with the amount of public interest. The innovator’s favourite response, though, has come from his children. His oldest son, who is four years old, is happy and excited to see his dad’s unique little car. The entrepreneur - father of two - hopes that by the time his children are old enough to drive, they’ll have a variety of Mini-Car lines and models from which to choose. The success of the first Mini-Car means diversification is on the horizon, and there are already secret new updates for the body design, he confides.

As the interview comes to a close, he glances at us. "Would you like to go for a ride?" The answer to that is obvious. El Feqi turns the key in the ignition, steps on the gas, and rumbles out of the workshop in his little blue hot rod. One of his staff invites us to join him in a second car and we zoom out the door in hot pursuit. We zip over the bumpy roads of downtown Kerdasa as we race El Feqi, waving at pedestrians as we pass. In the two cars, we travel all the way out to the highway, where the pyramids are visible on the horizon, before we turn around and head back downtown. Smiling faces greet us upon our return. The people of Kerdasa are accustomed to seeing El Feqi and his Mini-Cars drive by on a regular basis, but will these little cars soon become a familiar sight for the inhabitants of Cairo as well? Only time will tell.