On The Run: An Interview with Egyptian Atheist Sherif Gaber

Having been in hiding since his sentencing earlier this year, outspoken atheist Sherif Gaber has been offered asylum abroad; an escape from constant surveillance and persecution. So why does he choose to stay in Egypt? 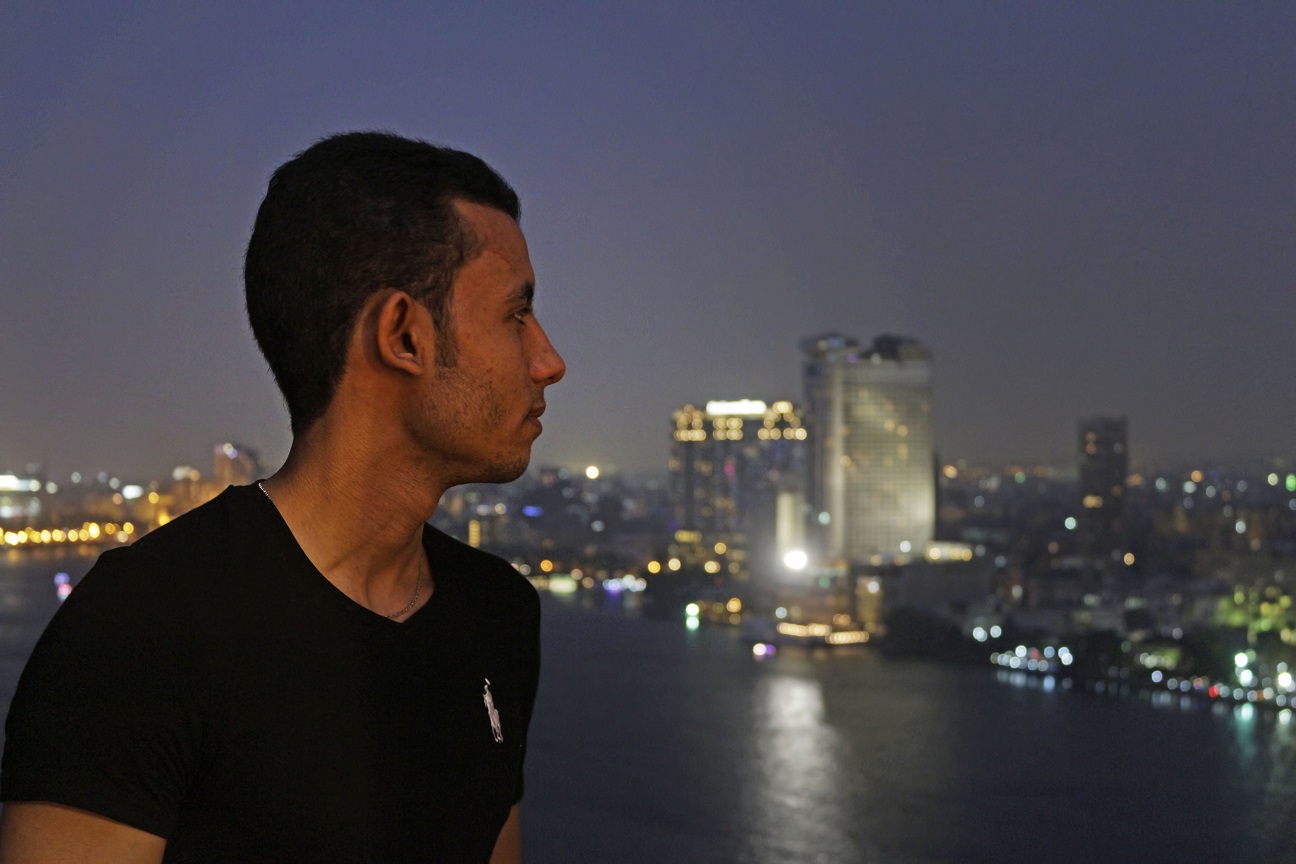 In 2013, Sherif Gaber, like many bright students, questioned his sociology professor. Gaber thought they should approach topics from a scientific point of view, not a religious one, after his professor had launched a tirade against homosexuality during a lecture. Days after the spat it seemed that the whole faculty was against him when they had Facebook-stalked him and printed and distributed his personal posts about freedom of thought and atheism on campus. Police raided his home at 3AM a few months later, threw Gaber in jail and confiscated his computer, books, mobile phone and money. Charged with a slew of 'crimes' ranging from contempt for religion to the dissemination of indecent ideas, his case made international headlines. Found guilty, and sentenced to a year in prison with hard labour earlier this year, Gaber, now 22, has been in hiding ever since.

First of all what’s your situation with the police now?

Back when I got arrested, I was released after paying 7,500 LE in December 2013 but the case was still ongoing. Of course I didn’t have that kind of money and my family didn’t help me at the time either so the Association for Freedom of Thought and Expression bailed me out. Then in February 2015, I was found guilty and sentenced a year in prison along with hard labour.

What were you charged for?

It’s quite an extensive list of charges actually! Inciting atheism and immoral values, contempt for religions, dissemination of indecent ideas, and finally dissemination of malicious and controversial thoughts. I don’t even know how those last two are real charges! The worst part is that none of these accusations are real. First they said I have an atheist Facebook page which wasn’t true; I only created one about a week ago. I mean they confiscated my computer at the time of my arrest so they must have examined it and seen for themselves. So anyway I got sentenced and I decided to leave when I got offered an opportunity. And for a month a half maybe I was putting all my paperwork together and when I was only one step away from making that happen I changed my mind.

Because I felt like I was running away, and I’m not a coward. This American lawyer following my case wants me to leave the country by any means, and I’d hate to discourage her after all the effort she pulled to help me leave Egypt, but for now I live alone, away from my family. We’re talking but I don’t want to get them involved in any sort of trouble any more, I know the police will get a hold of me eventually.

Are they still on your trail?

I can only assume so. I mean, no one has reported me but if someone did, they would arrest me again. I’m not afraid of getting arrested by the way. I only fear for my life.

Did they have a warrant for your arrest?

Yeah, although they only asked if I was Sherif Gaber. I said yes so they dragged me out of my house.

We know the story that escalated to your arrest from the news but, how did you feel when your professors pretty much teamed up against you, insulted, threatened and failed you all your classes for simply expressing your convictions?

The only person who stood by me at the time was the head of the department, but in general these things don’t faze me. My social science professor who got me in trouble, only a day before our argument was expressing to a class of 200 students how proud he was of me for coming in second and that I were to be a teaching assistant in the near future and so on. My only concern is that I wanted to specialise in Criminal Justice and to do so I had to be a sociology graduate and I was well on my way when my test scores came in sixth in the governorate but because of their intolerance, they failed me in my nine classes and I’m practically expelled from my university So I had to let go of my aspirations.

What about your friends at university?

I only know three people there, they’re my only friends. A lot of the students claimed I were preaching to them about atheism throughout the investigation. I don’t understand why people do these things.

My father passed away, and my mother and siblings wouldn’t speak to me at first and when I got arrested, they turned on me. It was a combination of fear and worry about me, and hate towards me for putting them and myself in trouble. Like when my mother used to visit me in prison she’d cry for me but would also tell me things like menak lellah.

Recently you began releasing YouTube videos. What made you decide to go public with your convictions; why not keep it to yourself?

I decided I might as well go public since I’m assuming I’ll get arrested eventually. I was born and raised by a strict Muslim father and parents. I know the Quran inside out and memorised every bit of it. I was practically the ideal Muslim really, and after my father passed away, I isolated myself and started using the computer as I was never allowed to before. I like to think and learn. I started reading online articles and watching videos and talk shows by intelligent people around the world and I wished I had the knowledge and power to do these things myself. I don't mean to change anyone’s mind or convert anyone to atheism, but for myself and to encourage freedom of speech and help people think and present to them alternative viewpoints, simply to let people know they exist. Whether people want to believe or not is their own choice, not mine. But I didn’t want to simply get arrested without being heard.

So how did you convert to atheism? Was it a sudden decision or a gradual process?

Gradually, of course. I think it started when I watched a video of an Iranian woman being stoned to her death for being in a relationship with a Christian. My life turned upside down. I started seeing how dangerous religions can be, and how they justify killing and torturing other humans, in whatever shape or form, in the name of God. At that point I was still praying, and I cried in my prayers because deep down I felt like no one was there to hear me, and I only wished for some intangible power to remove this burden off my chest. I was ben narein, stuck between both worlds, and unsure where to turn. But with time I abandoned this hope and decided to do good and be the best person I can be on my own, for humanity not for any higher power, and come what may after that.

Do you think there’s any hope for freedom of speech to emerge in Egypt?

The entire process relies on two factors integrating together to make that happen: the government and the people. One can’t progress without the other. For example if you place a government such as that of Switzerland, with its liberal ideologies, within a nation like ours, the people will riot and turn against it overnight and without thought, because the people in this country are intolerant towards other perspectives and lifestyles. So this readiness needs to sprout from the people first, because the government is the product of the people and they, in their ignorance, choose the kind of governments that oppress us as individuals. But if we are to accept each other’s perspectives,  we won’t succumb to a government that mutes our opinions. Freedom of thought incorporates the ability to state how we perceive things and we’re not at fault when we express our feelings or thoughts towards ideas or towards one another. But the government as well as the media folk have no tolerance for any of that. So when the people understand that they have the right to voice their opinion without being attacked by the government or any citizen, only then will our country start to progress. I think it will take maybe another 40 years before we are able to get rid of all the factors getting in the way of that progress.

In your opinion, why does the government fear atheism?

It’s not only atheism that they fear, it is any thought that is different from theirs. But yes, atheism in particular they fear. When I got arrested they sat me in a room with five officials who kept cursing at me for not believing in God. I never insulted you for being religious, so why insult me? I only criticise thought; I never disrespect it - and I’m not even religious. So it’s quite ironic to get this reaction from religious people who deem themselves better human beings. Religion is like heroin. It feeds you with a false sense of power. Religious people think they have the right to insult, and kill and torture in any way they see fit because they believe they are doing God a favour by doing so. A very small example happened when my mum once sat me with a seemingly kind and gentle sheikh, who came over to our place to try and talk me out of my atheism. After he was done preaching I only asked him “Can you prove me then that God exists?” and he just went berserk and cussed at me, took off his shebsheb and tried to beat me up with it.

So what now Sherif, what’s your plan?

What happened to me sparked a battle for freedom of thought. I can’t run away now, I prefer to fight for my rights from within the battle itself, and not on the outskirts in some foreign land.

My goal is to be able to express myself any way I want and help those who desire the same freedom to be able to do so as well, in our own country. I don’t see myself as an activist, I simply want people to listen, and think without fear. I could do it from anywhere else in the world, but I believe it would have a more powerful effect to do it here, where we’re born and raised. I was offered asylum from Switzerland but I refused.

But you’re in danger here, and you have the chance to start anew...

To me it’s not about living leisurely, making money or gaining fame or having a safety net. I can cope anywhere. I don’t care about leaving the country to that extent. I love to travel, sure, but move? I’ll end up being like Albert Saber or something who also sought asylum for similar reasons, left the country and simply went on with his life and, in time, forgot what he fought for. No, I’d rather stay here and hopefully make a positive change.