In just three years' time, interior design firm Studio Five has gone from a quirky start-up to a dignified studio, working with the most prestigious clients in Egypt. We sit down to get the inside scoop from the interior design team that everyone is talking about. 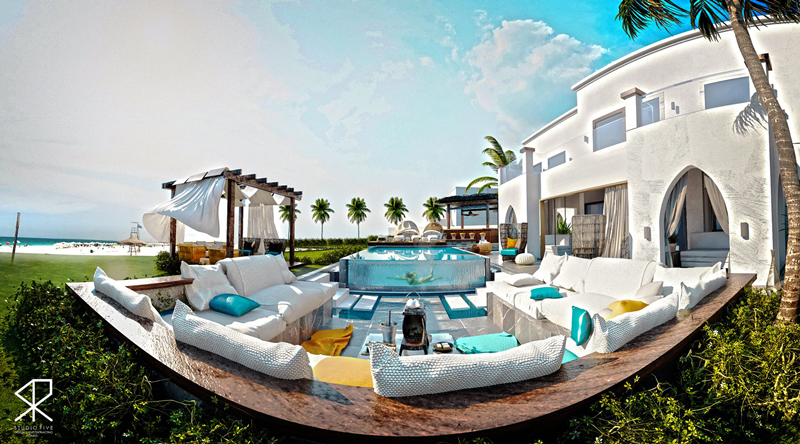 Studio Five started up at the end of 2012; in those brief three years the design and contracting firm has gone viral, achieving massive success, even appearing on CairoScene’s own illustrious Interior Design Accounts You Should Follow. The small team has grown from a group of university students who stuck together to start up their own firm, and matured into a single cohesive unit with an unparalleled laser-like focus on their art. Sitting down to speak with them at their office in Zamalek, it’s clear that the funky eye-catching designs that garnered them online virality have coalesced into a refined and proficient ethos. The office itself is full of interesting pieces designed as well as built by the team; tables, light fixtures, and art fill the relatively small space, bringing a rustic utilitarianism to it. Hatem Essawi, Ahmed Tarek, Ahmed Khalifa, Mohamed Galal, Mohsen Rizk.
Photography by Project V.
The members of Studio Five attended university together, travelling to a design workshop in Italy and competing against other teams from around the world. Drawing on the individual strengths of each member, the crew that would go on to form Studio Five ranked in first place. It was clear from the beginning that this group was going to make waves. After school, the guys went their separate ways to pursue individual interests, but still sharing that passion for design. They explain how Studio Five came together:
We all had the dream to open this firm. At first we thought we could gain experience from elsewhere, but we couldn't find ourselves while working at other firms and companies. Working for someone else did not suit our mentalities. We always had our vision and taste that we couldn’t apply in other people’s companies. So we decided to start freelancing together and, within two or three months, we had decided to start Studio Five. We made the decision to do business with our own vision. Studio Five isn’t laid out like a traditional business. There is no pyramid structure with a boss or CEO calling the shots while the minions, down to the lowliest intern, toil away. The hierarchy is horizontal. Studio Five is not a one man show - this what gives them an advantage over competitors. The team draws on the individual strengths of each member, they explain: "Our edge is our diversity of designs - making each project have its own identity; serving all kind of clients, young or old generations. We tailor the design for the client." This multifaceted dynamic allows Studio Five to bring the client’s vision to life, even if the client happens to be unaware of their own taste. Sometimes it’s difficult for someone to describe why they like something other than they just like it. Bringing the design out of the person and making it a reality is something of a speciality for Studio Five, taking inspiration from the client themselves and finding clues in everything from their travel destinations to their fashion choices. "You will find the client’s identity in the design, not ours. We consider a house (or any other project) a piece of cloth that they want to do something specific with, and so we shape it to their needs," explains a Studio Five member, laying hands on the table and causing a bobblehead of a the statue of David to shake. David is accompanied by several other figures - five in total - among them a hellenistic bust and a Buddha. "Each one of these represents a different part of the Studio Five group; the five gods of design," they explain with big smiles on their faces. Gods in the flesh they may be, but these are not inaccessible gods floating on clouds far above the mortal world. To earn the favour of these gods of design, you need only to prove yourself worthy of their attention.