Once a worker manufacturing ammunition, Mona Kamel Dirani fled Syria, moved by the daunting realities of war. But as she settled in Egypt, the refugee refused to stay home and began volunteering at the same organisation helping her subsist. 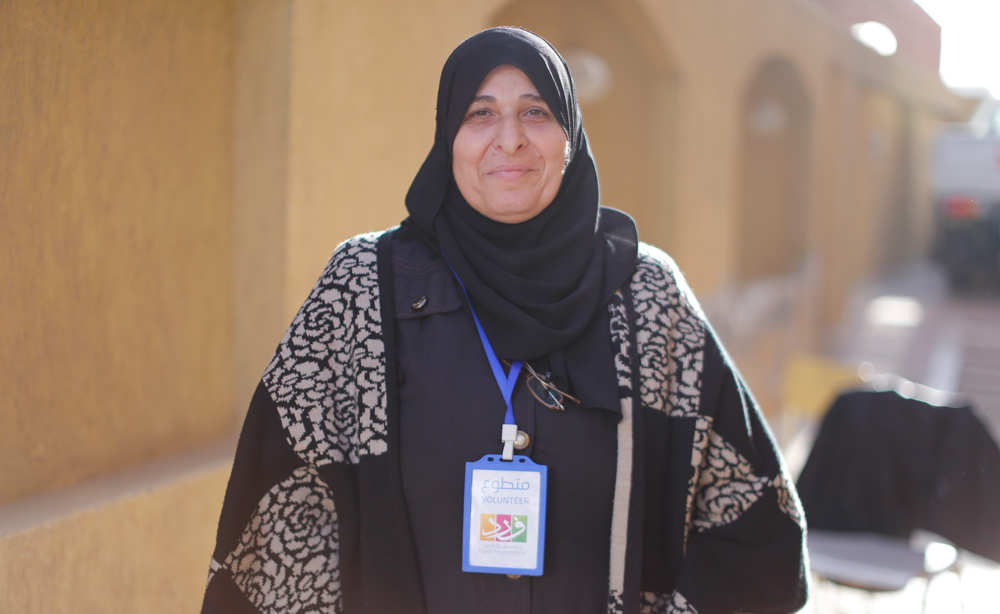 “I’ve worked since I was 10,” says Mona Kamel Dirani, her words drenched with the pride and fervent willpower of a woman whose life didn’t leave room for hesitation. “I’ve always worked at home, then I got married at 14 and was hired for my first job when I was 24, as my husband’s financial situation was difficult,” says the Syrian woman.

We’re standing under a mild winter sunshine on a corridor just outside a community centre set up by Fard, the non-profit organisation where she volunteers; the same organisation that has been helping her subsist since she arrived to Egypt, escaping the daunting realities of war in her home country. “I like volunteering activities and I like to help; it also helps me not stay alone at home,” says the 55-year-old woman, whose verbiage and toothless smile eloquently defeat the stereotype cast in stone by the victimising narrative surrounding the refugee crisis.

If I sit to think about my life and my circumstances, I will explode. But I am going out, helping others, and it makes me very happy.

“I like being proactive and starting my day early. Before coming here, that’s what I’ve always done. When I was 27, I was already out of the house at 6:15 AM to start working, only to return at 3 PM and start cooking, cleaning, and doing household work. This was my motivation, staying active and volunteering for the sake of God,” says the eager worker. "I am prepared to do this work until the day I die," says the 55-year-old woman.

Her story crystallises the paradoxical metaphor of war and displacement. A former worker in a factory manufacturing ammunition in her homeland, Dirani fled to Egypt in 2013, moved by the daunting realities of war, and found solace in an organisation where she not only receives help, but is also able to make a difference. Hers is a story of resilience, rebirth, and never-ending strength.

“I am happy to help the world,” she says as she takes a break from the community centre, where she is distributing blankets for refugees as part of Fard’s ‘A warm winter’ campaign. “Whenever I see the refugees happy, I feel so happy to be part of it; the foundation is providing winter clothing to all nationalities, Sudanese, Syrian, and Egyptian. I have been part of four different distribution campaigns, where people donate clothes and blankets. Whether they are old or new, this is something honourable,” she says.

My age doesn’t stop me; so I hope this generation can also offer their help without being asked, so we can all work together.

Next April, it will be four years since Dirani settled down in the Arab world’s most populous country, a land she arrived to after crossing to neighbouring Lebanon. “Egypt is the mother of the world, the best country that ever welcomed us,” she says, although she admits there is a lot of “suffering and struggling, too”.

“Syria, Syria, Syria,” she laments, as her voice breaks unveiling the nostalgia and deep longing for her family and homeland. “I need to see my children, but if I go there, I can’t leave,” she sobs. Having lost her husband in 2008, Dirani’s children are scattered across Lebanon and Syria. Her youngest son, who is 23 years old, was confined by the siege of Aleppo (at the time of the interview, Eastern Aleppo was under a years-long siege), while the eldest one lives in Lebanon. Her daughter had come to Egypt with her, but had to go back. “The most important thing is to meet new people and not to stay alone,” she elaborates.

In Egypt, refugees are not confined to refugee camps, but instead scattered across different areas, many of them in a district known as Little Damascus located in Cairo’s satellite city of 6th of October. There, amid an unfamiliar setting, the ruthless desert, and isolated plots of land, Dirani found Fard, a non-governmental organisation created by three Egyptian women who decided to join efforts and help the newcomers, inspired by their increasing number. “The situation is difficult here, but thank God, there are kind-hearted people helping me,” she says as she points out to the NGO workers. “Fard Foundation has been paying for the rent of my house since 2013 up until now; they’ve never left me alone. But this is not why I volunteer with them, no,” she emphasises. “I am having fun, staying active, meeting friends; and I am happy with my job. My life is organised, like it was in Syria; I wake up early, have breakfast, and kick off the day,” she says.

As she narrates her journey to Egypt, it seems no impediment could halt her tireless spirit; no nostalgia or disease that could halt her unwavering will to make the best of her capabilities. “Although I am suffering from cholesterol and low blood pressure, I feel glad to work. If I sit to think about my life and my circumstances, I will explode. But I am going out, helping others, and it makes me very happy. And I am prepared to do that work until the day I die,” she says.

Dirani’s story speaks to millions of youth who find in political unrest and economic stagnation a reason for despair to take over their everyday lives. “I hope the younger generations start volunteering as well,” she says, pointing out her age, considerably older than that of her colleagues at the organisation. “My age doesn’t stop me; so I hope this generation can also offer their help without being asked, so we can all work together hand in hand.”