Previous Post
Sit Back and Chillax, We've Fully Planned Out Your Easter With the Fam-Bam
Next Post
Egypt Returns to New Call of Duty WW2

The Democratic Republic of Zamalek: ISIS is a Lady

Everyone is at The Fish Garden celebrating the 2-month anniversary of Zamalek's independence when, suddenly, a gruesome act interrupts the festivities. 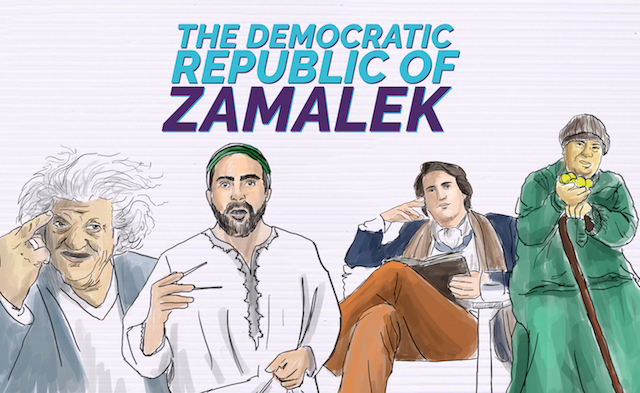 The Fish Garden is buzzing with activity and Louis Vuittons. The sun is out and a gentle breeze is warmly caressing the many banners of Robert Menzaman hanging high and proud behind the stage, while chitchatting tantes are being serenaded by live renditions of Julio Iglesias classics. Everyone is here to celebrate Zamalek’s two-month anniversary as an independent nation.

The birth of the new republic has not been smooth sailing on Robert Menzaman: he survived an assassination attempt, his son returned only to leave the household once again and poor workers are growing tired of the harsh conditions they have to face when entering Zamalek from Egypt.

Despite successfully protecting his fellow citizens from the rule of the Muslim Fraternity, he knows that the Milk Sheikh and his party still hold some sway inside the new republic. A week ago, Menzaman sent his militia, the Hardly Davidsons, to send a message to his detractors: He is the sheriff in town.

The loudspeakers of every mosque were rewired to the Nostalgocrat’s headquarters and the preachers with suspected links to the Milk Sheikh were arrested and put in the island’s prison, formerly known as the Yamama Centre. Three times a day, Menzaman makes a five-minute speech that is heard throughout the island, reminding the people that he saved them from a theocracy, and asking anyone with information on the Milk Sheikh’s whereabouts to come forward or risk punishment. Even a large screen was installed on the 26th of July Street to disseminate his message.

The celebration at the Fish Garden is meant to not only to celebrate the new republic but consolidate his power; and despite his increasingly dictatorial rule, he does still enjoy staggering success from the majority of the people of Zamalek.

Sitting on the table next to his wife Georgette, he watches with pride his supporters dancing to his favorite song Everytime We Fall in Love. His eyes are glued to the festive crowd when, out of the blue, a loud scream of horror shakes the area. Everyone’s attention quickly turns to the object of gloom, a severed head rolling slowly on the grass. The crowd is frozen to the spot, the music stops and 22 Louis Vuitton bags drop to the floor. Suddenly, they all realize what they are looking at. Panic ensues and everyone begins to run towards the exit, shouting: "ISIS has come to Zamalek, ISIS has come to Zamalek.”

Robert Menzaman, on the other hand, doesn’t flinch and remains seated. He calls his security over and asks two agents to escort his shaken wife home. Then, he orders the rest to go and look for the body of the victim. He believes that this atrocity might be the Milk Sheikh’s way of retaliating with a message after his crackdown….

Earlier in the day, Dina, a 20-year-old AUC student, is being pushed out of bed by her mother Sousou “Yala ya habibti, we will be late.” An ardent Pro-Menzaman supporter, Sousou does not want to miss the festivities at the Fish Garden.  She has been to all of his rallies, believing it to be her patriotic duty to support his rule. Dina, on the other hand, has seen her life turned upside down since the creation of the new Republic: her studies have been suspended until AUC opens its new campus in Markaz Shabab el Guezirah, and she barely sees her Mounira-based boyfriend anymore since the “Shitty Garden City” has not been selected as one of the five areas in Cairo with visa-free access to Zamalek.

She does not really want to accompany her mother but she has to play nice. Having just recovered from a battle with cancer, Sousou needs all the support she can get, a burden that falls chiefly on her only child.  “Come on, my love, forget about your hippy boyfriend, I am sure you will find a garcon de bonne famille in the Fish Garden.”

Once there, however, Dina is bored like Hitler in a Bar Mitzvah. While her mother is clapping and bobbing her head to the nostalgic melody of Mr. Iglesias, her daughter is playing Candy Crush on her phone, shutting out her surroundings, wishing she were anywhere but here. She excuses herself from the table and heads towards the grotto so she can be alone. She opens her pack of cigarettes and takes out the joint hidden amidst the herd. She lights it and takes a big first drag, exhaling relief along with the smoke.

Her moment of solitary bliss is interrupted by a silhouette lurking behind her. When she turns around to see who it is, she is met by a hand violently pressing against her mouth. Her screams fall silent as the mystery man pulls her up and drags her towards the wall. She tries to fight him off but he is too strong. He pulls his pants down and begins rubbing himself against her, while the terrified eyes of his prey watches on helplessly.

All of a sudden, a woman dressed in black from head to toe appears out of nowhere. Without blinking an eye, she brandishes a sword and decapitates the aggressor mercilessly. She picks up the disconnected head by its hair and throws it into the crowd. Dina is trembling and doesn’t move. The mysterious woman extends her hand and, without uttering a word, leads her to safety through a secret passage.

When Menzaman’s men reach the grotto a few minutes later, all they see is a headless corpse lying on the floor, pants still down. When the men draw closer to the body, they notice a message written with blood on the casualty's exposed buttocks “The end of patriarchy is near assholes. Love, Ann Arki.”

Later that night, the streets of Zamalek are quiet as people are still in shock from that bloody incident. Up on a roof, Ann Arki is watching over an abandoned villa, her eyes fixated on a particular man. Marc Menzaman is enjoying a conversation with his friend Taymour in the balcony, oblivious to the attention he is receiving, oblivious to the fact that his old love, Leila Sheikhshbeer, is back in Zamalek.