Ahmed Samy meets social satirist and founding member of Esma3ona, Sheif Asaad, who, with a crew of like minded doers, have managed to develop hundreds of village, create new economic structures and even get the attention of President Sisi himself. 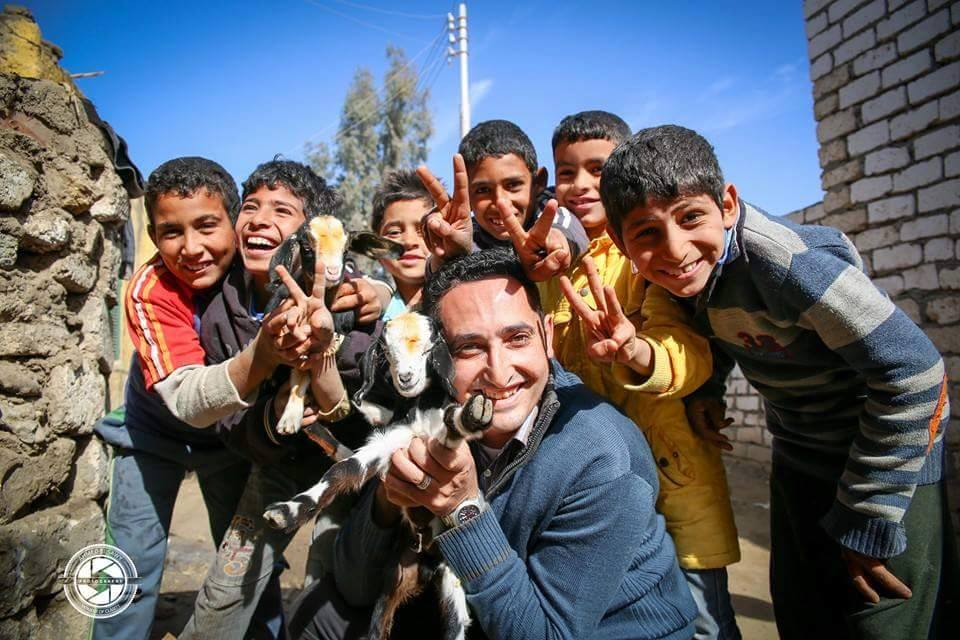 I met with charismatic social satirist, Sherif Asaad, founding member and CEO of Esma3ona, to discuss the unimaginable suffering of low income villages, how they got 500 million LE after six months of operation, from their recently acquired friend President El-Sisi, and how they proved that a group of disgruntled Egyptians can make a difference through social media.

The story that was told to me was beyond anything I had imagined or seen. I had researched Asaad’s personal work and the charity’s project, which was the spectacular eye grabbing renovation of underprivileged villages in Egypt that was making waves across the Internet. I went in with a set of the usual questions and after our initial meet and greet, I never got to ask any of them. The main six founding members met and the idea was born from a social media post, where a mutual friend, Haitham Nabil, wrote the all too familiar status we see everywhere; a disgruntled fellow citizen has the occasional F U Egypt. The first to reply was Dr. Mohamed Fathy who said if we all leave our country, then who is supposed to help develop and build and make things better? Instead of complaining how about we grow and make things better, there is hope, he insisted. He mentioned and tagged a few of their common friends including Asaad who was just as enthusiastic about the idea. “I was so thrilled at the thought of all of us influential professionals in our fields getting together and making a difference. For me as simple as pick a time and a place, tell me which café’ and I will be there.”

The main members hold very influential positions, with most of them being doctors, and are all involved in social media as well as televised media. So after planning they, chose the TV programme with the highest raitings, and decided to go on that show to showcase their idea of a better tomorrow. What happened next, was a shock to everyone involved. While on live TV, they get a phone call from president Sisi’s spokesperson, saying the president was watching the show and really likes the initiative and wants to meet with them in 48 hours. “Honestly, we were surprised and shocked at what had happened. It’s one thing to go on TV and present an idea, and it’s another to have to go to the president and tell him in person all about it” Asaad says. "So of course we stayed up for the next two days brainstorming before we met him!”

It’s safe to say that Asaad and his group are progressive young thinkers who aren’t necessarily in agreement with a military run nation, and they didn’t try to hide the fact. one of the first things Fathy said to the president was that he should go on TV and apologise to the people about the Kofta AIDS cure. “As skeptical as we were of him, it turned out he was actually very smart. He listened more than he spoke. We had a 19-year old girl who was in her third year of college and there she was speaking endlessly to president Sisi who was fully attentive, listening and never interrupted. It’s ok to be against the regime, and fight while developing and progressing as a country. There’s no more time or space really to go out and destroy things. One of the first things, I told him [Sisi' that I didn’t vote for him, and that was okay by him because it was obvious to him that we loved our country and wanted to make things better.” After the presentation, the president was impressed, asking the charity how much money they needed, and to his surprise they said none. Usually that’s the first and most important thing people need, but Esma3ona had other plans. “We just wanted the government to play ball; sometimes a permit would take up to a month to get approved so our only request was to have that paper done in a day,” says Asaad, adding that the president was so impressed he gave them carte blanche to utilise his office for any needs they may have in regards to paperwork and other miscellaneous requirements. "So the deal was we had 25 villages in dire need and horrid conditions, and we were going to develop them in six months, funded by El-Orman and sped up by the president’s office. He doubted that we’d be able to do it in six, he was saying that it’s too short when he saw how confident we were, he then asked jokingly, 'why don’t you make it in 3 then?'. He likes wagers and making jokes like that." They started working on one village after another with their enthusiasm rising while the president’s office enthusiasm was dwindling. “Three or four months into the project, we were 15 villages down, and they [the president’s office] had completely stopped answering our calls. We were still working unaffected and posting our pictures online and something tells me he must have seen it because one day in April, out of nowhere, the official Facebook page for the presidency wrote a status praising the work we do. Shortly after, we received a phone call for another meeting.”

"Again we weren’t prepared at all for what was to happen next; we went and there were all the heads from other charities, some with over 15 years of experience in the field of development in Egypt. There were such prolific organizations, and people we had looked up to for ages and to our shock the president was showcasing us as an example of how they should be operating, saying to them how we worked on the project meticulously while showcasing progress on social media which was gaining a lot of popularity amongst the people.” On that day, Esma3ona was given 500 million LE from the Federal Reserve to control and use however they saw fit. Another gain from the meeting was that they were now also able to unite with other charities that were doing great work in all different areas under one umbrella to form a powerhouse. So El Orman, Vodafone, Meslemany, and many others, would go into needy villages with Esma3ona and not only would they renovate houses, but also open schools, provide clean water and electricity, and work towards eliminating hepatitis C, with the likes of Dr. Gamal Sheha, owner of the world’s best centre for liver disease located in Mansoura.

“So the amenities and basic needs are now provided, disease is eliminated, along with illiteracy. The problem doesn’t end there, though. We need to provide them with a source of income and, as most of these villages - if not all - are agricultural villages, we provide them with cows. The cow is pregnant and will provide milk which will be another source of income, not to mention in six months they will have a calve which they can keep or sell for approximately 5,000 LE. We send them money to feed the cow and take it to regular veterinary visits. In one case a woman who was one of the first villages we visited, has now turned into quite the businesswoman owning over 12 cows.” Asaad says proudly. There’s no disputing that the work being done by Esma3ona is nothing short of greatness, but of course there wouldn’t be a need for any of this if our country hadn’t been neglected and sucked dry for the past 40 years. However, Asaad and his team still think there's a long way the government can go in making sure the country develops in the right ways. “So, for example, if we built a school, they should give raises to the teachers there and provide meals as an incentive for the students to come,. There’s no doubt if the government was made up of younger members they would be running alongside us enthusiastically, you know there’s something fundamentally wrong when there’s almost 20 of us running around getting stuff done and the government can’t keep up.”

Regardless of the hindrances it doesn’t seem like Esma3ona is stopping anytime soon. With further plans to develop another 126 villages, it was a rather refreshing and eye opening experience to see that, amongst all the corruption and negativity, people are still rising up to the challenge and making a difference and it can be all ignited from something as simple as a social media status.

Keep in touch, donate knowing that your money is going to game changers, join their Facebook page here.