What Does Ramadan Mean for Egypt’s Coptic Christians?

As tens of millions of Egyptian Muslims begin their month-long fast, Valentina Primo heads to Coptic Cairo to find out how the Christian community celebrate and experience the festivities. 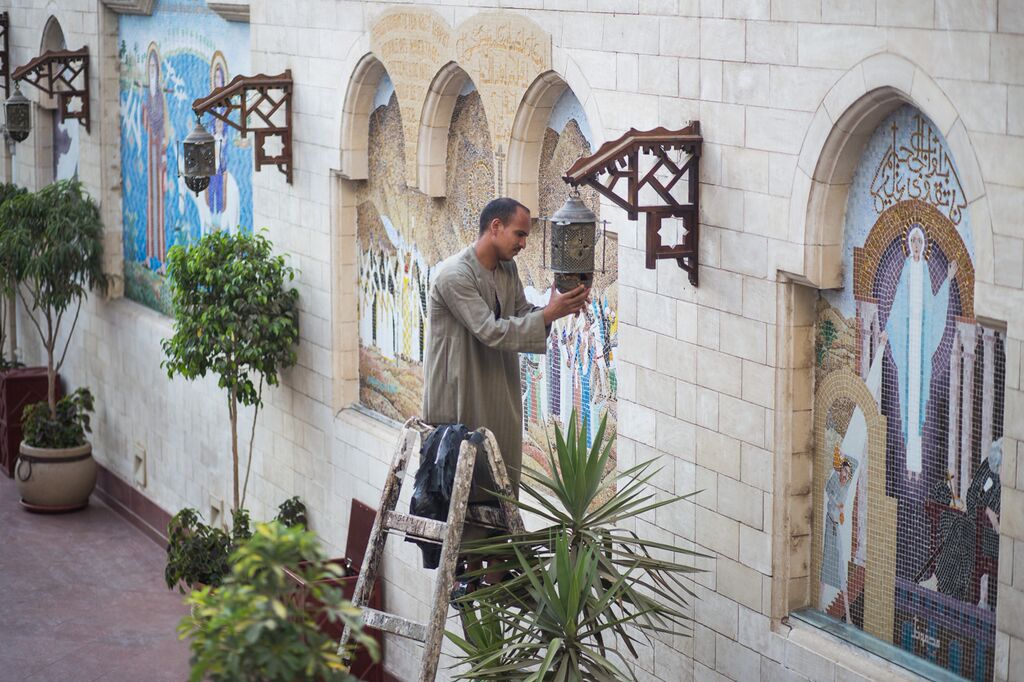 It is almost 4pm and the palm trees surrounding the Hanging Church in Coptic Cairo offer soothing refuge from the burning heat. It is two days before the Islamic month of Ramadan begins and Mario, Kyrillos and Fadi are taking selfies on the church stairs. “Ramadan is a very nice time for me because I can stay out late and play with my friends,” says 14-year-old Kyrillos, who was named after the late Coptic pope.

Two streets away, Raouf meticulously arranges the soda cans on a fridge as he gears up to receive thirsty clients in his modest shop on Mar Girgis Street. Next week he anticipates, while pointing at the corner, he will be sitting on a large table breaking the fast with his Muslim neighbors. “I do not fast, but we are all friends. We have grown up together, we have played together, and we always share the tradition of having Iftar,” he says. Lined up along the street, his neighbours’ balconies boast some colorful Ramadan fawanees swinging to a frail wind.

“Ramadan is a special period for everyone in Egypt. The streets are empty, and everybody spends time eating with their family friends”, adds Ayman, who sells religious imagery in a shop tucked in a picturesque alley beneath Cairo’s Monastery of Saint George. A palm tree draws shades over the poster of late Pope Shenouda III, hanging over a tiny alley at Saint George's monastery.

One of the earliest Christian groups outside the Holy Land, Coptic Christians represent the second largest religious community in Egypt. The number of Copts, however, has been argued over for many years. According to private estimates, between 6 and 11 million Egyptians are Coptic Christians, but According to Christian organisations Copts Without Chains and the Copt Coalition of Egypt, the community extends to between 15 and 18 million people, representing about 18-22 per cent of the country’s population.

Between culture and religion

“We spend Ramadan the same way Muslims do; it is a more cultural tradition than a religious one,” says Andrew, a 30-year-old marketing specialist working in Giza. “It has always been anticipated since I was at school. As a child, I was always the sneaky friend for my Muslim classmates; they could have some food or water from what I had!” Today, however, he doesn’t take food to work during the month of Ramadan. “There is no point in eating alone; I usually only drink water during day and have lunch when we go back home, at Iftar time. Actually, I get invited to all of my friends’ Iftars, and I also organise it once a year for my friends, together with my family,” he says. “It is funny sometimes to hear at work when Christians gather at lunch time and begin whispering ‘what should we order?, What should we order?’.  Then they all get together in a room where they can eat without tempting the rest,” he says. One of the most enjoyable traditions of Ramadan is the late-night souhor before it is time for fasting again. “Together with my Muslim friends, I usually play some sports at night and then eat; we have done it since we were young, as having sohour was always a legitimate excuse to come home late,” he adds.

In his opinion, however, Ramadan has as many pros as cons. “Not being able to drink a beer isn’t nice; the traffic and crowds are unbearable; and the temper of fasting people is sometimes terrible. But the atmosphere as a whole is amazing, this cultural tradition where you sit in an ahwa balady in the street, with all the lights and decorations. It gives you the feeling that the whole country is living one state of mind,” he says.

Natalie, a young professional specialised in advertising, prefers not to be in Egypt for Ramadan, as it is a hectic period which requires plenty of endurance. “I don’t enjoy it as much as other people,” she says. “I never felt so connected to it since I was a kid, and I grew up with that perception because I was surrounded by people who would look at you weirdly if you had food or water”. The cross tattoo on a woman's wrist, a distinctive mark for Egypt's Coptic Christian community.

“While growing up, Ramadan was a bit weird to me. When I went to school, kids were more uptight than grown-ups when it came to eating in front of people and all Christian children were asked to sit in a separate room to eat lunch. I didn’t feel that in college, but as a child it was not an enjoyable month because you were kind of separated from everybody. You obviously take care not to eat or drink in front of them, but the comments would still be there even if you did your best to respect their feelings,” she says.

Escaping social pressure, Natalie decided to spend the past years abroad, synchronising her holiday time with the Islamic festivity: “I just wouldn’t feel very connected to what people were doing and it seemed easier to take my vacations in this period, although I do like how it brings people together.”

Natalie’s two brothers partake in Iftar and Sohour meals as a form of socialising and a daily bonding experience. “My younger brother loves it, although he doesn’t fast it is more of an outing for him where everything makes people come together and focus more on family values,” she says.

The tradition of fasting and abstinence in Egypt is not exclusive to the Muslim community: Christians fast 210 days for different commemorations throughout the year. Although Coptic fasting in general means adhering to a vegan diet, abstaining from animal products such as meat, fish and eggs, many Egyptian Christians follow a tradition similar to the Muslim fast, abstaining from all food until the sun sets. Ayman in his shop, in Coptic Cairo.

“Fasting makes me feel healthier and detoxes my body and mind,” Natalie says. “What I like about fasting is that food at that time becomes a form of nourishment, not enjoyment. I remember that when the fast was over, I felt that I didn’t want to stop fasting, because I felt healthier."

Other traditions typical to Ramadan, such as charitable giving, are shared among Christians in a common bonding experience with their Muslim counterparts. “Some of my friends buy juice and distribute it to underprivileged people in Heliopolis, where we live,” says Mina. “Sometimes the church organises an Iftar for everyone. It is a beautiful scene,” adds young videographer Abanoub. Last year, the Coptic Chruch hosted a Ramadan iftar and it is expected that two more will be held at Abbasiya’s Saint Mark cathedral this year, a source linked to the Church told Cairoscene.

“Ramadan to me is like Christmas; I love the atmosphere. All Egyptians feel the same in both festivities. Whether you are Muslim or Christian, you celebrate it. It's who we are,” Abanoub concludes.