In a country where even hints at the existence of sex in a film can have it banned from viewing, we’re scratching our heads at how these managed to slip through the cracks. 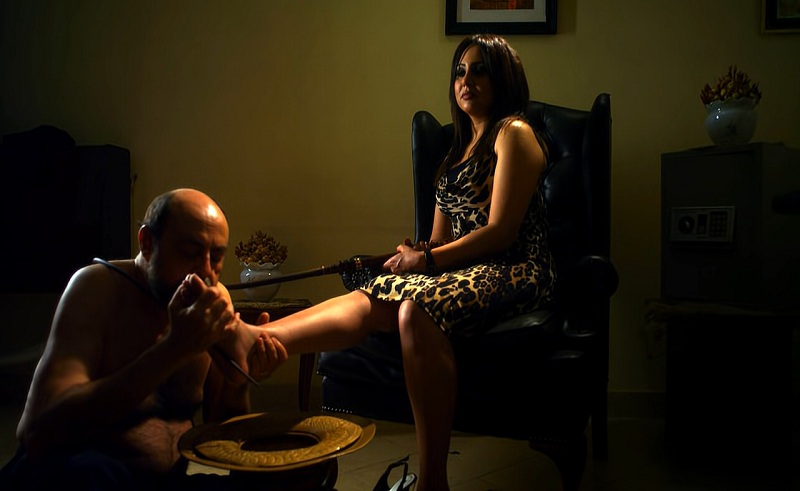 Human sexuality doesn’t exactly have an open platform for discussion in Egypt (what even is coitus?), much less its film industry. Though it’s often hinted at and portrayed in the most referential or campy way possible (complete with cringe-inducing music), you’ll hardly ever see any skin-on-skin. So to see topics such as these tossed around in Egyptian cinema running amok is simultaneously intriguing and confusing. So, we’re going to meander through some of the more outlandish sexual themes that managed to slip by the Censorship Bureau in Egyptian film throughout the years.

Other examples in Egyptian cinema include Saeed Marzouq’s Almozneboon which also had its fair share of masochism; with Soheir Ramzy digging her claws into “Adel Adham’s” back, giving their sensual lovemaking a bit of shock value. Scenes like the latter would go unnoticed by Egypt’s Censorship Bureau, causing them to stand trial for greenlighting the film without actually doing their jobs. One of the most noteworthy example to close this entry on is the character “Araby ElHusseiny” in the recent Bent Men Dar ElSalam who had quite the thing for femdom; enjoying bondage, submission and even tending to his mistress’s feet.

A more archaic term for Hypersexuality, Nymphomania is an excessive need or desire for sex specifically for women (with the term Satyriasis used for men). A clinical disorder in the psychology community, an acute and unrelenting appetite for sexual pleasure characterizes a Nymphomaniac, akin to a form of addiction. It’s a more or less common theme in Egyptian Cinema; with characters such as Nadia El-Gendy’s “Naemat Allah” in Wekalet ElBalah being a stark example of your garden variety nymphomaniac; charming particularly virile men from the streets, cleaning them up and having her way with them, shortly marrying them after. The film was an adaptation of Naguib Mahfouz’s “Ahl El-Hawa,” but it ended up botching the whole premise of the literary work.

One of Egypt’s most infamous entries into risqué cinema however was “Sayedet Al-Aqmar Al-Sawda;” managing to almost perfectly portray your textbook example of a Nymphomaniac. It was a Lebanese movie with an Egyptian cast, with the pivotal character “Aida” played by Nahed Youssry routinely succumbing to her intense sexual urges whenever a full moon would present itself. She would stalk the streets looking for a man to ravage, that is until she found “true love” and doused her own fire. All in all, it wasn’t a particularly good movie, with the sound guy even popping up in one of the scenes, but truth be told; it had quite a bit of steamy sensual scenes.

We aren’t going to meander into the psychological/ethical/logistical clusterfuck of discussion surrounding the topic of pedophilia, but we’re going to try to convey what we have to say in the least horrific way possible. Pedophilia is the sexual attraction and/or conduct between an individual of or above legal age (an adult) and a child (or somebody below the legal age). Typically, Pedophilia constitutes a relation between somebody at least 16 years of age, and their victim would typically be five years younger. Now that that’s out of the way, Egyptian cinema has a few horrifying examples of the condition; perhaps Egypt’s most renowned and noteworthy cinematic production El Ard has a scene near the beginning where a child and a young woman named “Waseefa” engage in sexual conduct. Another example would be Enas El-Degheidy’s Al-Qatela; containing a scene depicting an older man forcing himself onto a little girl. The latter scene is one of Egyptian cinema’s most shocking and harrowing pieces of film to have ever been presented to audiences.

Not exactly the subtlest of terms, Gangbanging (also a wholesome family activity) is a sexual act in which multiple people participate in sexual activity with one central individual, either in sequence or at the same time (oftentimes it’s just a smorgasbord of skin). No matter what you think of Egypt’s Censorship Bureau or the odd stance that Egypt’s cinema has on matters of a sexual nature, gangbangs were never truly portrayed in Egyptian film (lizards would play violin before that ever happens). However, there was a particularly unnerving rape scene in “Heena Maysara” in which Somayya El-Khashab’s “Nahed” plays a particularly alluring woman who both men and women find an intense sexual craving for; culminating in three men forcing themselves on her and having their way with her simultaneously. Though gangbanging can be considered a form of rape, it’s not always the case; it also happens to be a popular and legitimate fetish.

We’re going to reiterate on the fact that we’re not in the business of telling people how to live their lives (ha ha ha), but we tend to draw a line when it comes to sexual conduct between blood relatives. Incest, in essence, is the sexual attraction and eventual sexual interaction between family members or close relatives. This also includes relatives unrelated by blood; stepfamilies and adoptive individuals may also count. From a religious and (arguably) societal standpoint; incest is forbidden, and at best, intensely frowned upon. Lo and behold, however, its prevalence in Egyptian cinema is pretty rampant; whether it’s stepfathers sexually abusing their stepdaughters or stepmothers having their way with all foreseeable male members of the family, you’ll find your fair share of incestuous examples in both classic and modern Egyptian film. In a more recent example, “Ahl Cairo,” a relatively new drama sees a father having incestuous relations with his own daughter. In a more dated example, “El-Mooled” features an overtly intimate incestuous relationship between a brother and his sister; “Heema” and his sister “Emara” have quite the fondness for each other, exchanging passionate embraces as well as kisses more often than not. Towards the end of the film, however, they discover that they’re not actually blood relatives, so they decide to tie the knot (irrelevant to bondage whatsoever). Another example would have to be “Al-Abwab Al Moghlaqa,” in which a familiar scene involving a mother and her son; “Mohammed,” a teenager who just hit puberty is seen embracing his mother particularly passionately till she pushes him away, telling him he’s a grownup now.

Now here’s a fun one (coming from us, that means something); Cuckolding is a sexual act in which a typically submissive male finds pleasure in watching his wife’s sexual conduct with another man, woman or group of both genders (not very wholesome). Though typically a service more than a fetish, and not really that prevalent in reality, it’s present in at least one Egyptian film; “Dokan Shehata” has a scene in which the character “Karam” asks his sister “Beesa” to dance with her fiancé “Shehata” while he watches. Not exactly cuckolding to a T (a G?) but it’s something we guess.

Not particularly outlandish and neither is it shocking in any way, foot fetishes are pretty self-explanatory; people sometimes find feet attractive, sometimes they want to do things with/to them, motherfuckers like touching them, you get the point. Being considerably tamer than the rest of the entries in this “article,” there have been plenty of Egyptian films with an emphasis on foot fetishes without much of a dramatic influence whatsoever; mostly being a result of the director’s own interest or that of the viewers (and we have a lot of foot fetishists here). “Motarada Gharameya” is considered an open love letter to foot fetishes; where Fouad El-Mohandes’s “Mounir” being a talented womanizer with a passion for women’s feet, going so far as to comedically pretend to eat a woman’s foot with a spoon. Mounir routinely sees his psychiatrist, “Dr. Khashaba,” only to convince him that the best part about a woman’s body is her feet. There’s even a scene where Khashaba chases women’s feet around town, eventually uttering the film’s most iconic quote; “Madam, the tip of your feet is a sign of your overwhelming femininity.”