Because we're refined in the most ridiculous of ways. 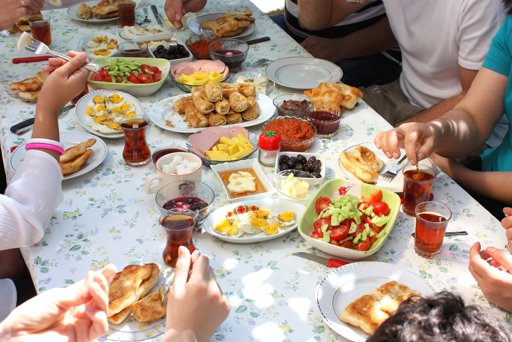 Much like royalty and ancient nobility (except not at all) we Egyptians have our own set of unspoken rules of etiquette. You’re not sure where they stemmed from, you’re not sure why they exist. They don’t entirely make sense to you once you pause to consider them but they are ingrained in our culture nonetheless, and if one of them is broken, you automatically think la2 3eib, ya3ni.

When inviting people over for an occasion, any occasion, every 3ozooma must have enough food present to feed a small army and their descendants for at least the next seventeen generations, as well as their extended families in the countryside. The fact that approximately 80% of this food will be left uneaten is entirely irrelevant; it should be there regardless, burdening the dining table with its weight. Ideally, no less than three separate cows must be available. A number of different carb options should also be there; at the very least following a ratio of three hefty platters for every two humans present.

When offering money to an Egyptian – your sayess, the koshk guy, whatever – you always have to play this little game of cat and mouse wherein he insists you keep the money and you have to push him into acceptance, even though you both know after a few "khallee khallees" he will obviously take it. This back and forth exchange is the bane of our existence (no you hang up first, no you! No YOU! A7a.); let us all cut to the chase and get on with our lives. We know you're trying to be nice, thank you, but there's no need for this unnecessary pretense. Just take the damn money.

When it comes to the maneuvering of a vehicle, the guy must always, always drive if there are women in said car. Recall many a night out drinking, wherein the guy has essentially drank/drugged himself into a stupor while the girl has had approximately two sips, but still he still has to take the wheel. He could be obliterated past the point of seeing two feet in front of him, may or may not have puked on himself at some point in the night, but 3ala gosseto will he let a girl do the driving. A girl drive when there is a male present in the car? La2 tab3an.

When it comes to matrimony in our fair country, we tend to firmly believe in the notion that at a wedding, as in a war, there can be no man (or woman) left behind. Obviously, on this most important of days, you have to invite everyone you, your family, your friends, and your pets have ever laid eyes on or exchanged more than three syllables with. Ah tab3an you have to invite Tant Shahira, your father's business partner's cousin's friend's aunt, who you've never actually met but she knows your dad fa 3eib ya3ni if you don’t extend an invitation to her. If you have not been invited to a wedding, not to worry. Every guest there is entitled to also invite whomever they want to bring along for the party. Egyptian brides and grooms know approximately 60% of the people at their own wedding.

If you're a girl, there's no way on heaven or earth you will smoke in front of your dad. It's just flat-out 3eib. He knows you smoke; your pack of cigarettes rests at the top of your open bag that he sees around the house; he's discussed it with your mother (who you do smoke in front of) – there's no doubt about it. But you will never actively light or take a puff from a cigarette in his presence. Doesn’t matter if you're 50 years old and married with two kids of your own, you will always, without fail, if your father walks into a room, place the cigarette behind your back, or put it out, both of you continuing on with your lives as if smoke is not still obviously pouring from that cigarette that is clearly yours. For that matter, you'll also never smoke in front of your parents' friends or your friends' parents. 3eib.

Azzuzah is the homegrown brand popping up with a diverse catalog of soda flavors, [...]
Week Month Year