Not only did Zohra Merabet come on top of the biggest 2018 marathons in Egypt so far, she also walked away with an AXA 1-year-health insurance policy. 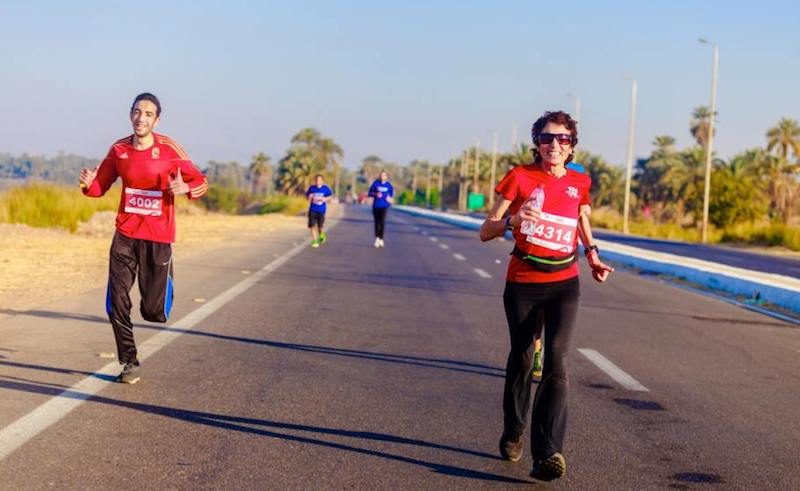 One chilly winter morning in the upper Egyptian city of Aswan, runners and athletes invaded the city's corniche gearing up for what was set to be the biggest marathon to ever take place in the city. Organised in collaboration with AXA Egypt, The TriFactory Aswan Marathon was packed with fitness enthusiasts who flew in the city to take part in the fitness fiesta set to ensue.

A couple of hours and a few degrees warmer later, runners emerged on the horizon to begin their descent to the finish line, with the second woman to finish the 42K race being Zohra Merabet; a 68-year-old Algerian woman who grew up in France, where she would walk and climb nearby mountains as part of her daily routine at a young age.

Later on that month, Merabet snatched the 1st female spot at Cairo Runners' Marathon, where AXA had provided 13 Red Crescent medical tents across all routes traversed, in addition to sponsoring ambulance cars and portable clinics with medical personnel on board to ensure that runners get the fastest medical support in case of emergency. The collaboration comes in line with AXA's ongoing efforts to promote healthier and more active lifestyles.

Upon landing in Cairo more than three decades ago, Merabet found that hiking and walking are simply not viable options in the chaos and madness that is modern-day Cairo, which led her to decide to take up running as an alternative. She got instantly hooked, going on from there to join the founding members of Maadi Runners and participate in almost every marathon taking place in the country and in different European capitals. We, being the millennials whose only idea of a marathon is binge watching four years of TV in one go, sat down with Merabet after she snatched the 2nd position at the Cairo Runners Master Marathon, and her words hit the nail right on its head.

Tell us about your story with running...when did you start? What kept you going?

It all started in France where I grew up. Practicing sports was a way to feel good and independent away from the physical mobility restrictions Arab teenage girls were faced with. There, I was essentially walking and climbing nearby mountains as a hobby and sport. When I moved to Cairo 33 years ago, I took up running as a substitute to hiking, and I loved the sense of autonomy, physical and mental comfort it brought me. Running is in a way like praying. It’s something you need – it helps you calm down, helps you focus, think about what you’re going to do in the day, get rid of bad feelings. It’s a form of daily therapy.

What is the ultimate goal you want to achieve through running?

Besides a good physical exercise,  I didn’t have a specific goal. I was not interested in competing however I knew I wanted to finish the 42K race. But then I found myself meeting a lot of young people at Maadi Runners who share my passion for running. And then I started thinking "why can't I keep up with them and do better?". And that's when my competitiveness kicked in and I went on from there to be one of the founders of Maadi Runners and started taking part in marathons and fitness initiatives. The generational mix of the founders has been a great incentive and motivator to reach my goals throughout the decades.

Some people's perception is that running could be risky to older people, what's your take on that?

I’ve been running every day for nearly 35 years every day, and I’ve seen all sorts of people running. For the younger ones, much like me when I was their age, want to spend their excess energy in a certain way. I’ve seen many people turn to running because they have very serious personal problems, like divorce or losing a dear person, or a job. Running helps them get over it, and then later they adopt it as a way of life. It helps people have better control of their life, no matter what age they belong to.

How do you train for a marathon?

If you can run for half an hour nonstop then you can run a marathon. It’s a combination of mental and physical effort. The mental aspect is the most important thing when you run a marathon. The whole idea of training is that you run regularly during the week, 2 or 3 times. Once a week, you make it more challenging by adding an extra 2km a week. Your brain and body register the extra effort and the week after you can add a further 2km. You can reach 35 KM over a 16-20 week training period.

You’ve been among the winners who were awarded an AXA health insurance policy for a year. Do you think it’s important for young people to have medical insurance?

Absolutely. Having health insurance puts one's mind at ease and peace for knowing that if worse comes to worst, they've got their back covered. I think the right to medical insurance should be a basic human right. I believe it’s essential; especially after the inflation, where medical expenses’ increased dramatically. It frees you to become more adventurous – within reason – taking on more of life’s challenges and pursuing passions we may otherwise set aside. This applies to all ages, not just young people. We could all do with a safety net and feel secure in the knowledge that someone will be there to catch us fall, should that ever happen. It’s a liberating feeling.

What’s the best advice you could give to people who’d like to start running?

When you start running, the first 2 or 3 weeks are atrocious but it’s a stage which will soon pass, and then comes a lot of comfort. Don’t run alone; always have a friend to encourage you and motivate you to keep going. And every now and then, have a little competition.