Eihab Boraie sits down with Karim Abdullah and Dirk Wanrooij, the two men at the helm of Ain Bicycle - a custom-bicycle workshop that stands at the forefront of Egypt's two-wheeled revolution. 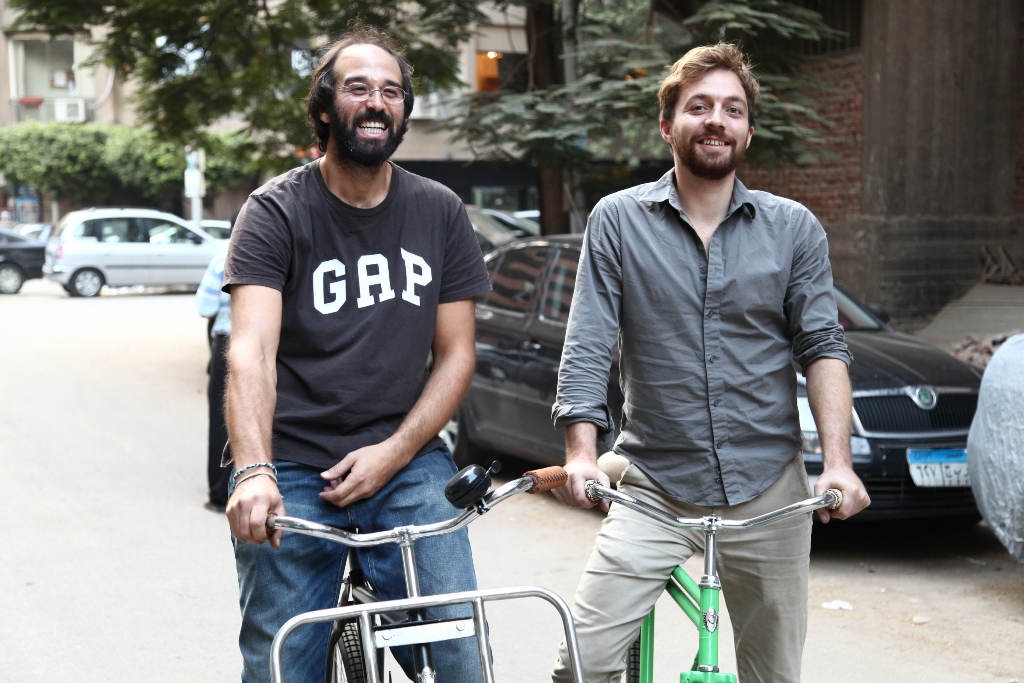 As a result of man made fuels and the inventions created to run on them, traffic is all around us killing our precious time, health, and earth. Somehow these innovations became hailed as progress. Eventually the world will wake up and realise that we already have the means of getting from point A to point B faster than a car, while improving your health, and without poisoning the planet.

Cycling is more than an activity, it is a lifestyle that is globally spreading, and leading the charge here in Egypt is none other than Ain Bicycle. What began as friends building bicycles for friends quickly turned into an apartment assembly plant with two cycling enthusiasts, Karim Abdullah and Dirk Wanrooij, sharing the same goal of getting a nation to rethink how it commutes. Fortunately, I was able to catch up with them to talk about the shop and about the emerging cycling revolution.

Abdullah (above, right) lived the majority of his life riding a bike around Egypt, ignoring the warnings that it isn’t safe. Meanwhile, Wanrooij (above, centre) grew up in Amsterdam, arguably the most bicycle friendly capital in the world, and explains that “unlike Cairo, bikes are pivotal to the Dutch lifestyle, which is why in Amsterdam, a population of over 700,000, has over a million bicycles.” In Amsterdam over 60% of inner city and 38% of the greater city area trips are made on bicycles. Despite their different backgrounds, these cyclists found each other in Cairo and turned the shared love of a cycling culture into a business in an untapped Egyptian market.

Living in Cairo since 2009, Wanrooij, a self-confessed bike addict, remembers “attempting to purchase a bike from sou2 el gom3aa, which fell apart before I even got home. I imported a bike, and eventually friends in Cairo started asking us if we can build them bikes. In no time demand grew, which naturally led us into turning our hobby into a business.”

Launched in May 2013, Ain Bicycle's mission is not only to provide the Egyptian market with well-built bikes that last, but also to give its customers the option of customising each part of the bike to suit their personality. In just over a year they have sold 40 bikes, with sales increasing exponentially with each passing month. According to Wanrooij “Every month we produce 10-12 fixed bicycles, sold as is, with an option to upgrade. We build whatever custom orders we receive, and challenge ourselves to create a special one-of-a-kind of bike that can’t be found anywhere else.”

At some point in Abdullah’s life he noticed a cultural shift in the attitude towards bikes in Egypt, noting, “When I was young Egyptian culture only considered the bicycle as a toy, a reward for getting good grades.” At that time, higher social classes frowned upon bicycles, as they were seen only as a mode of transportation for the poor. “Now that isn’t the case. Led by an aware youth movement, social divides have become blurred, which is why brand name bicycles like Bianchi or Peugeot are being imported into a growing number of shops in Egypt,” he explains. What sets Ain Bicycle apart is that it is a uniquely Egyptian brand that imports parts but builds the bikes here in Egypt allowing you to customise both size and style for the perfect ride, ranging from 1250 to 2500 EGP.

“The demand is growing and people seem to know more about bicycles, which is why they aren’t settling on buying cheap bikes and are willing to pay higher prices for quality performance that lasts,” explains Abdullah.

Trying to pinpoint the reason behind the culture shift is difficult. Some could argue that the massive expansion of gated communities in Cairo has helped allay any fears of cycling safely, as their roads have significantly less traffic. Others suggest that sporadic organised communal rides have helped further the statement that two wheels powered by people are better than four motorised wheels creating endless congestion. The real issue that needs addressing before this subculture becomes a mainstream way of life is the establishment of proper cyclist rights on the road. “Cyclists need laws and infrastructure to protect them before sharing roads with careless vehicles becomes a widely accepted solution,” Wanrooij explains.

With cycling culture growing globally, the Egyptian government is missing out on an opportunity that could easily solve multiple issues. Cycling enthusiasts worldwide are increasingly turning to scenic bike trips as a vacation, instead of lounging on a beach. There are millions to be made by simply creating bike lanes that will attract many to take a bike ride around the pyramids or from Cairo to Luxor and so on. Even the simple act of establishing a few car-free zones in places like Zamalek or Downtown will be more enticing to foreigners and more profitable for local vendors than the traffic ridden mess that it currently is.

The government seems to be failing to acknowledge cycling as the potential solution to the troubling traffic problem. Take the example of China, which has over a billion people and an exponentially growing economy. The richer people got the more cars took to the streets, and the worse off the country as a whole became. In 2010, citizens were stuck in a traffic jam that lasted longer than 9 days, while in 2013 smog became so bad that cities were forced to shut down due to zero visibility on the streets. This led to many citizens opting to leave their cars at home, instead relying on bicycles and public transportation. Egypt already ranks among the most polluted countries in the world; do we really need to wait until it forces a shutdown of Cairo before exploring solutions?

As always, expecting the government to make a needed change will not happen without pressure from its people. That is why the emphasis falls on the growing number of cyclists to continue to spread awareness and dispel the myths that it isn’t feasible to commute on bicycles. Looking to help build this community is Ain Bicycle, who hope "to eventually create a cycling hub where anyone can work on maintaining their bikes, attend workshops, and join in solidarity in advocating for more rights.”

Common sense suggests that cyclists deserve more street rights than motorists because, by encouraging more people to cycle, we will ultimately increase tourism, decrease traffic while making Egypt a healthier place to live. Egyptians often talk about how they wish they could return to being known as a cosmopolitan city on par with Paris, but in this day and age, that dream isn’t possible without embracing and protecting the emerging cycling culture.

To learn more about Ain Bicycle check out their Facebook page here.