Bringing classic cartoons and good old fashioned riddles to the modern age, Alf Leila's new app will be the talk of Ramadan... If they reach their crowd-funding goals. 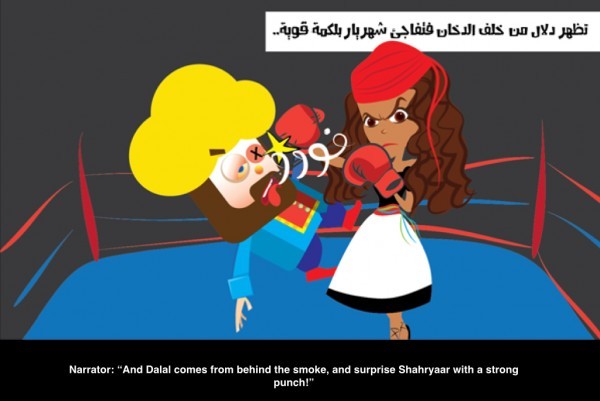 What began in the 80s and challenged the brain after a long day of fasting? Give up? The answer of course is the beloved Ramadan Fawazeer. Bringing families together in front of televisions before Ramez Galal, El Camera Khafeyah, and the hundreds of big budgeted Ramadan dramas, was none other than good old fashioned Ramadan riddles In an attempt to bring back the idea of Fawazeer but with a modern, digital twist, the team at Alf Leila Fawazeer have developed a fun app and new episodes that will usher in a wave of nostalgia this Ramadan.

If you were alive 80s then surely names like Nelly and Sherihan will summon fond memories of trying to answer the episode's riddle before mama. Each episode revolved around trying to guess answer to a riddle with clues to the answer buried within skits, dances, and songs. Taking the same concept but giving it a new format and platform is Alf Leila Fawazeer. Acting as CEO is Amr Hussein who explains “Our initial spark was to develop mobile games that launch in the form of competition, so users can get scores, compare them with their friends, and win prizes.” Turning this spark into a test product, Alf Leila Fawazeer launched their app, SuperSayem, last year and quickly garnered positive feedback. “Our objective was to test the concept and gauge user reactions to the gaming experience collided with a nostalgic Ramadan flavour. We put four different tracks of gaming: the first was an Alf Leila digital comic with a visual riddle at the end of each episode. The second was a Mosalsaat Trivia based on new series on TV. The third were interactive games like Khoshaf - a Candy Crush clone but with Ramadan khoshaf items. The fourth was Feen El Sela7? (Where is the Weapon?), a daily funny tale followed by a quick game to find a hidden object in one frame,” describes Hussein.

Once Ramadan was over the team began collecting data from a user survey conducted during the app launch. According to Hussein, “We did user surveys, and found that people are nostalgic for winning in Fawazeer in addition to the fact that people used to love cartoons in Ramadan and that they miss the tales of Alf Leila.”  Taking their suggestions into consideration, the team decided to drop non-interactive game features, as well as SuperSayem brand to focus on developing Alf Leila as the brand and expanding by developing digital comic episodes. “Our app’s new season contains 30 digital comic episodes telling adventures of Alf Leila heroes in “Lala Land” and will feature four interactive games, with user scoreboards, that rotate to announce one daily winner.”

The level of the planned expansion is totally dependent on how much money is donated to their current crowd-funding campaign. According to Hussein, “If the campaign meets its first target we will secure prizes like four iPhones (for Fridays competitions), and a daily 1000 EGP cash prize for first daily winner. If we reached the second target, we’ll have one short cartoon movie on YouTube, and get iPhones for Saturdays as well, plus we will make the cash prize 2000 EGP. If we reach the third target, we’ll add one more short movie, and will secure three daily cash winners.”

If the ambitious campaign is successful in reaching its goals will surely be hit amongst Egyptians, and the cartoon movies that they hope to produce are intended to fill the void of cartoons in the Arab world that are suitable for both parents and children. “We combined the feedback with the popularity of grown ups cartoons (The Simpsons and Family Guy) in the region, and were set about the concept of extending a tale from the heritage in contemporary modern art. We identified that the perfect tale to extend was Alf Leila, so we started the first season with untold stories about 30 Wives of Shahryar, and have put a vision for the a continuous series of seasons extending the main characters of the story into continuous tales,” details Hussein. By making episodes that build on previous seasons, Alf Leila Fawazeer has the potential of converting new viewers each season that will be enticed to go back and watch the series from the start. “The principle of plot continuity helps with having a new innovative season every Ramadan for a full 30-episode product. Across the year, we will be branding characters to show up in different means, (standalone mobile games, merchandise, advertisements, also they will appear in a small competition with Santa in Christmas). Next season’s challenge is to develop Shahryar the King and historical characters that teach valuable lessons through a funny and satirical script,” he explains.

With a devoted team of eight professionals from various backgrounds, Alf Leila Fawazeer has already made great strides to bringing a modernised version of Fawazeer back to Ramadan. If momentum keeps building, then it won’t be too long until Alf Leila Fawazeer finds itself on TV competing with the big budget Ramadan productions. If you are a lover of riddles, cartoons, or winning great prizes, then download the app or show your support by helping their fundraising campaign, and before you know it Fawazeer will once again become a staple of Ramadan that hopefully live longer than their predecessors.

To download the app or to learn more about what you will get if you sponsor click here.