American's took to social media to complain about the use of the Arabic word 'Haboob' to describe a sandstorm in Texas... 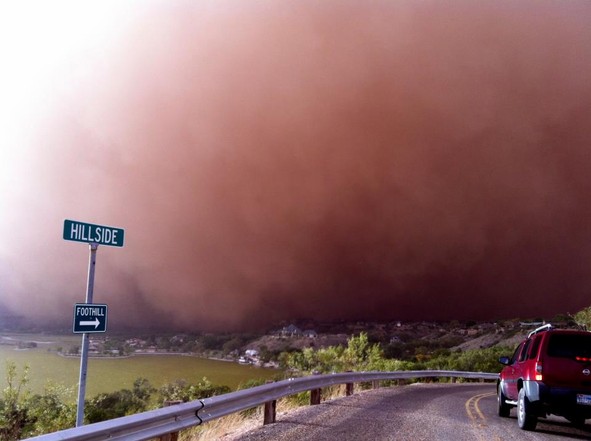 Just when we thought Americans couldn't get any more xenophobic they go ahead and prove us wrong, throwing a shitstorm over a sandstorm in Texas which was given an Arabic name. A windy dust storm hit Texas this week, and an Arabic term, 'Haboob' (pronounced 'hu-boob' not '7abboub' – it's not a loving sentiment) was used to name said storm, resulting in an avalanche of anti-Arabic and anti-Muslim comments, memes and general uproar from angry Americans

When Texas television station KCBD posted a photo on its Facebook page with the caption "Haboob headed toward Lubbock [the Texan city]," it prompted a flood of incredibly xenophobic comments. One of our personal faves: “Since when do we need to apply a Muslim vocabulary to a good ole AMERICAN dirt storm?? ...I take great offense to such terminology! GO BACK TO CALLING THEM DIRT STORMS!!"

While the term is Arabic in origin, and is usually used to describe bad weather in Sudan, it is, meteorologically-speaking, the correct terminology for the particular storm that occurred in Texas. The American Meteorological Society atmospheric science dictionary defines it as a “strong wind and sandstorm or dust storm.” So technically, that's what it is. And for the record we don’t want our language attached to your shitty dust storm either, so kindly take your racist sentiments and fuck off.

However, to be fair to Americans, there were also many remarks in response to the racist comments: “You realise your racist comments made are going viral and brought down Lubbock as a whole?...You people are really just intolerant and racist.” It really is just purely ridiculous that there was any controversy to begin with and America, self-proclaimed 'land of the free', should probably take a second look at their amazingly ignorant population.