Proving that beachside dining isn’t just about endless bags of Chipsy and the occasional gandofly, Astoria officially flings over its doors this Wednesday at Bianchi on the North Coast, promising a true taste of Greece. We get the first taste. 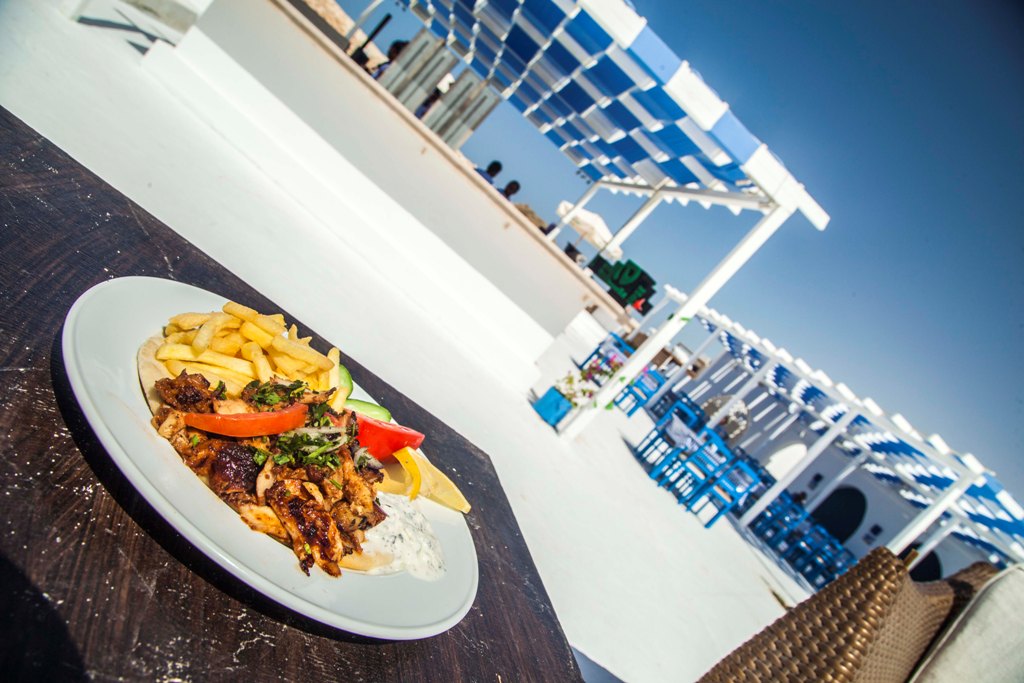 A true taste of Greece in gorgeous whitewashed surroundings, complete with Greek columns and a grandmother eager for you to taste her food. This is what Astoria in Bianchi promises, and they certainly delivered. We arrived on a balmy summer night last week, and were immediately greeted and seated in a lounge over-looking the sea. The villa that Astoria has taken over for the season looks as authentic as it gets, and for a moment we were half expecting Pierce Brosnan and Meryl Streep to jump out and re-enact a scene from Mama Mia. Luckily, we were instead pleasantly treated to some authentic Greek music as well as Greek versions of classic Arabic Pop songs, giving an air of familiarity to the venue. Alexandra Henein, marketing manager of both Astoria and The Smokery, explained that her Greek heritage meant that this project had been in the works for some time now, while her grandmother has provided the kitchen with all the authentic recipes she’d learned and cooked over the years.

Though the menu might be smaller than what we’ve come to expect from Egyptian restaurants that claim to do it all, Astoria’s offerings are the quintessential cornerstones of a truly Greek meal. We started off with a glass of wine, while choosing our appetisers: fried calamari, grilled halloumi, a herby potato salad and feta cheese pies. The calamari was as fresh as you can get thanks to the seaside location, but it was the potato salad that really won over our hearts as it was a refreshing change from the mayonnaise-laden varieties we’re used to.

With only four main courses to choose form, the taverna vibe was certainly communicated – beef or chicken, skewered (Souvlaki similar to a shish tawouk) or shredded (Gyros similar to a shawerma). We tried both Greek preparations an found everything, though familiar looking, to be extremely intriguing in taste. Whereas the Arab world relies on a little garlic and flame grilling, our Greek counterparts lay on the herbs and spices, making for a tremendous bite, bursting with Mediterranen flaours. Served with fresh potato fries, pitta bread and a Greek salad on the side, it’s a perfect post-beach meal. Given the demand for their fresh and quick foods, they’re also setting up a roaming Gyros right on the beach, so you can have a mid-swim snack without leaving your sun lounger.

This Thursday 7th August, Astoria is channelling Mykonos and switching up the venue to turn it into a beach club in cooperation with Laiddaze, bringing in none other than Pete Oak to spin. Saturday sees their first daytime beach party, but it’s a private affair so you’ll know if you’ve been invited.