Every once in a while the music scene in Egypt finds an anomaly; musicians that don’t solely pray to the Gods of ‘commercial house’... 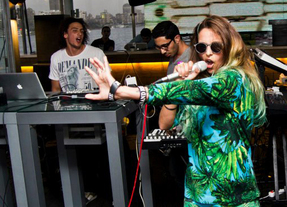 Electro-Clash duo WETROBOTS Wake & Bake Brunch last month with an incredible gig. I can’t say Hussein and Ismail were spinning, they were pushing buttons and hitting keys to make cool noises. Bosaina was basically shouting at the crowd and suffered a kind of leg spasm. Check out some footage of that here

Point being, they’ve just produced what’s probably the best music video to come out of any Egyptian outfit for a track from their EP Bang & Blow with the same title.

It’s filmed in LA and directed by Dana Boulos and mostly in Jim Morrison’s infamous room 32 at La Cienga Motel! Check it out below: