Feeding our appetite for everything from fondues to fast food, celebrated Chef Andrew Mitchell is changing the way we eat one bite at a time... 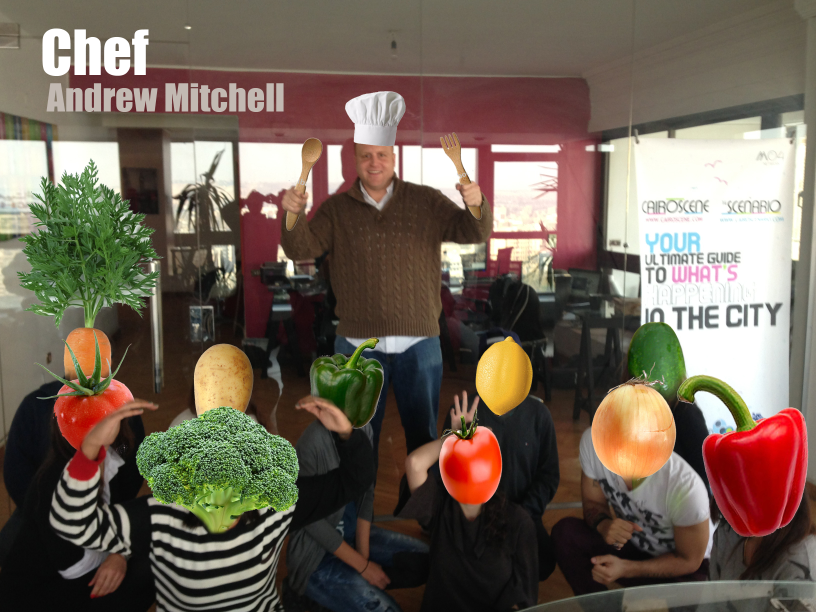 You might have seen this big, friendly giant around some of your favourite restaurants in Cairo. With his shocking red hair and bellowing laugh, it’s no surprise restaurateur/chef Andrew Mitchell was quickly scouted by the Middle East’s first dedicated food channel, Fatafeat, to present his unique recipes and exuberant outlook on all things food. The proud mind behind the likes of Alto’s Bistro, Mr. Wok, Ali Baba and Top Dawgs, we find out some exclusive information about Mitchell’s next endeavour, Andrew’s Deli, but not before we talk badgers, Barney and spider egg omelettes.

How did you get into the culinary arts?
I couldn’t figure out what to do after school, and my mom was badgering me, so I started cooking because I was hungry and my mom said why don’t you become a chef? My family has always had good food, and we were always home for dinner. Having a good meal was important to my family.

Have you ever seen a badger?
No, but I know how to cook one.

What kind of meal could you make with a badger?
A stew, with carrots and stuff.

What’s your favorite dish to make?
Whatever the person eating it likes. At the end of the day, you don’t like what you’re making anyway, so might as well be what they like. I like eating basic things – my favorite food is Mac and Cheese –not the Kraft kind, but with grated cheese and stuff.

How important are table manners to you?
It’s not about manners, it’s about etiquette.

What’s the difference?
Manners are so… I don’t know. The word is so childish, I prefer etiquette.

Did you go to a culinary school?
Of course, Liaison College in Toronto. Normally, you do 2 years study and 2 years at an apprenticeship, but I did them at the same time. So I made money from my apprenticeship while studying.

Does your food take more influence from the school or the apprenticeship?
Neither. Those were the base. My cooking takes influence from traveling and tasting food from everywhere?

Can anyone be a good chef?
It’s like singing or dancing; you have to have it and then develop it.

How can you tell if someone’s naturally talented?
They have to be comfortable in the kitchen, they have to know how to mix and match flavours and make new combinations.

Do you cook from the heart or from recipes?
Usually it’s from the heart. If I try something I like, I go from the recipe the first time and then I throw my own stuff in later. One of the things I’m good at is tasting something in a restaurant and then recreating and improving on it later in the kitchen. In Greece, I once tasted this amazing dish and later at the [Alto’s] Bistro, I came up with some recipes and some of them even turned out better than what I’d tasted in Greece.

So how did you end up the friendly ginger man on Fatafeat?
After I opened up Alto’s Bistro, a friend called and said he had someone from the channel who wanted to film. Ao they contacted me and did a screen test and we went ahead with it.

Everyone is dying to know – did you have a thing with the girl on the show?
No!

Was it strange suddenly finding yourself a bit famous?
In the beginning it was strange, but you get used to it. The weirdest thing is when I’m traveling. When I go to Europe, nobody knows me, then randomly some Syrian or Lebanese person sees you, and you’re not expecting it.

Does being a TV chef get you bitches?
Uhh I don’t know…. why do you say bitches?

Sorry. Have you gotten a lot of female attention from being a TV chef?
80% of the women I attract are older than me. Much older.

Which restaurant would you take a girl on a first date to?
I’d cook for her, obviously.

Does the food ever get into the bedroom?
Definitely.

So, as you know, food ends up as shit…..
Yo man… Why would you say that?… Look, once you eat, it’s not my problem anymore.

What is one ingredient you would never use?
Peppercorns, like the ones from the jar. No, wait, capers. If they’re from a jar, the vinegar takes over the dish. I’ll use fresh capers and peppercorns, but not from the jar.

So we’ve talked about your apprenticeship, badgers, and your rapid rise to TV stardom. And then there are your growing businesses – that being said, what’s your favorite Pokemon?
I don’t know any of them… is Spongebob a Pokemon?

No. So after the success of Alto’s Bistro, you opened a series of  gourmet fast-food restaurants including Top Dawgs, Ali Baba and Mr. Wok. How did that happen?
It was collaborative effort. When me and my partners were abroad, we always wished we had this kind of top-end street food back in Cairo. Instead of waiting on someone to franchise something, we took the opportunity to be the first ones to do it ourselves. Trying to start homegrown concepts and brands… it’s a completely different business than someone who’s just bringing the money and business and know-how, plugging people into the operation. This is more prestigious and has more potential and future for the employees in general.

Do your employees get to eat for free?
Yes.

What was the hardest part of starting these restaurants?
Finding  a good location and finding a source for good and affordable ingredients to make affordable, high-quality products.

If Mr. Wok, Top Dawg and Ali Baba got into a fight, who would win?
I think it would depend on what day of the week it was, every dog has its day. Mr. Wok can stand up for himself but he’s busy looking for Mrs. Wok. On the other hand, Ali Baba has a sword.

What’s the strangest or funniest thing that’s ever happened in your restaurants?
We had this one chef who used to call one of our dishes Chicken Herpes instead of Chicken Herbs.

What do you think of the food scene in Egypt?
I think that in Egypt there’s no place that’s consistent every day; where you can get the same thing every day. Why is that? – I think it’s just a combination of many things social and cultural.

What’s your favorite restaurant in Egypt?
Bua Khao. It’s a Thai restaurant in Maadi where nothing has changed since the mid-90s; even the prices haven’t changed. A Thai woman owns it and everything is excellent, she’s done the one impossible thing and remained consistent in Egypt. The food is always good.

So, what advice would you give to someone thinking about opening a restaurant in Egypt?
Go work for someone for ten years and learn all the mistakes before making them yourself.

If you could share a kitchen for a day with any celebrity chef, who would it be?
Uhhh… what’s his name….the guy who’s like “bam!” The chubby Portuguese dude… Emerald Degrassy!

What’s  your favorite restaurant in the whole world?
Lately I’ve been enjoying Oku. I don’t normally eat seafood but I do there.

Why don’t you eat seafood?
In general, I just don’t like it, but in England I like halibut and chips. I eat tuna, too. Just not the really fishy stuff I guess.

You said you’ve traveled around and tasted lots of things. What’s the weirdest thing you’ve tasted?
A spider egg omelette in Thailand.

If you could cook one mythical creature, who would it be?
Maybe Sebastian from The Never Ending Story because he’s really big and could feed a lot of people. No wait, Barney, because purple would taste amazing.

If you had a superpower what would it be?
I wouldn’t mind flying.

Why are you ginger?
My mom is a red-headed Mediterranean and my dad is blonde.

What’s next for you in the entrepreneurial world?
Andrew’s Deli in Zamalek. There’ll be breads, fresh salads, cold cuts, including our own recipes, like Cajun smoked turkey and stuff that you’re used to only finding abroad, cheeses, fresh vegetables and more. It’s like your one-stop-shop on the way to a barbecue or a picnic. But there’ll be a place for you to just buy a fresh sandwich and eat it there. It’ll hopefully open sometime in February.

Once you figure out the concepts and menus for a new outlet, how involved are you?
I’m really a behind-the-scenes person. Operations are very time-consuming and it takes more than one person to be in all these places, so we have a team that handles that. Now we’re working on keeping costs down and quality up and looking to expand. So I’m very involved. It doesn’t stop.

Keep up-to-date with everything at Top Dawgs, Mr. Wok and Ali Baba by following the links to their Facebook pages.