Sina Stieding heads to Sakkara to meet with the inspiring Mervat Said - an animal lover who has established her own shelter, paying out of pocket to give needy strays a home. 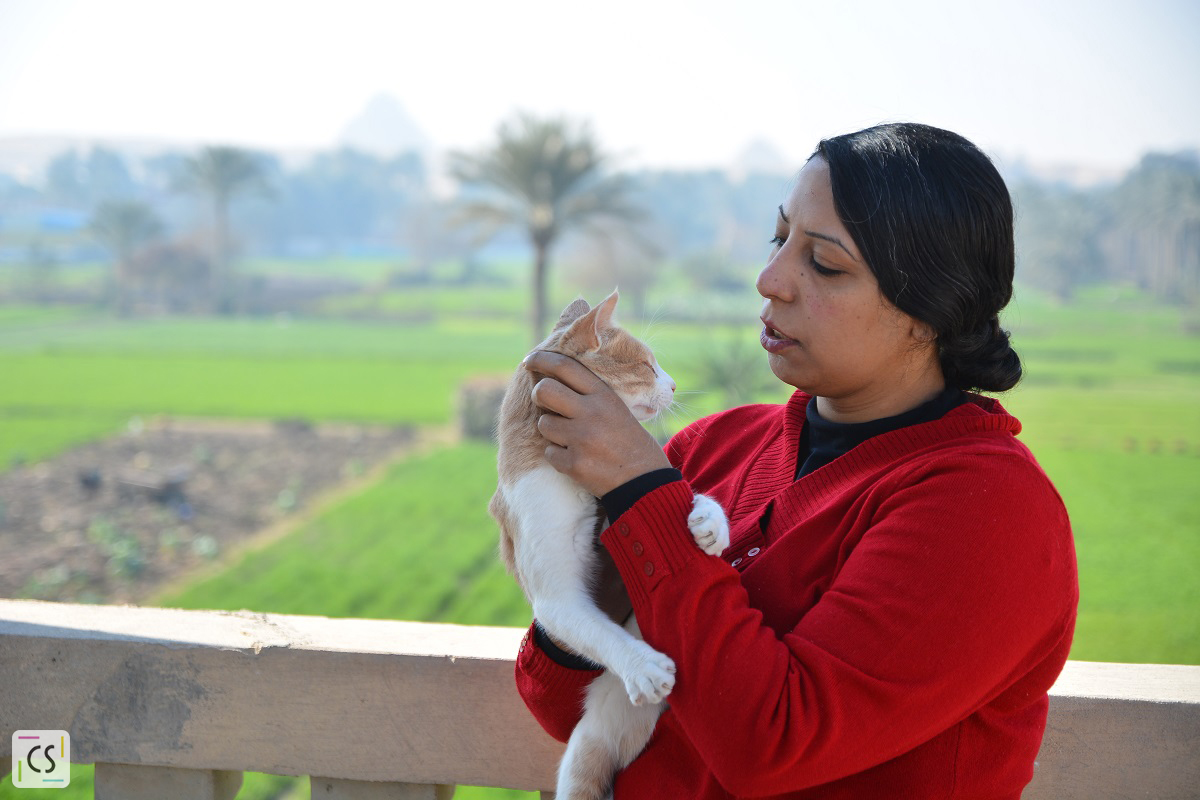 Whether it’s Zamalek or Heliopolis, the streets of Cairo are inhabited by countless stray cats and dogs, fighting for survival every day. Malnourished, often injured and sometimes blind, many of these animals are facing a most certain death in the rough reality of traffic, abuse and a lack of care. One of Cairo’s bravest women has stopped turning her back on the misery of street animals amongst us and has made it her life ambition to save as many of them from their fate as possible. We met Mervat Said at the shelter in Sakkara she created herself to give stray animals a home and find out about her struggles as the lady that owns 150 cats.

Eight years ago, Mervat Said was an engaged to be married woman who loved animals. Even then, walking past a street cat shivering and aching broke her heart, however, she had neither the knowledge nor the opportunity to take them in. One day she decided she couldn’t turn her back on a fragile kitten which was knocking on death’s door anymore, and took it home to her family’s house where she fed it, kept it warm and, essentially, kept it alive. Soon enough this experience would repeat itself and Said’s house would fill up with many more cats. The saving of animals that are too “poor” as Said keeps calling it, soon became her passion, her job and the content of her life - so much so that eventually even her engagement became secondary and ceased existing in favour of rescuing animals that needed her help.

“I couldn’t turn my back on any animal I saw that was too poor to sustain its own life,” Said tells us about how saving cats, dogs and any other animals became the sole purpose of her life. Her apartment was filling up with more and more cats. Pleas to other shelters to help her could often not be met as the few organisations that exist did not have the capacity to take her cats, even though she offered to pay for her cats which had become her “babies” the moment she brought them home. Said became aware that many shelters had policies that stated animals would be put to sleep if capacities were overflowing. Unable to give any of her cats into the care of a shelter that couldn’t guarantee the animals' needs and even considered murdering them, all animals stayed with Said in her apartment where she spent her lifetime earnings on giving them a chance for survival.

Much like in the shelter she owns these days, she would always leave a window open to allow cats which could carry themselves the chance to leave and to allow other strays to enter if they so wished. Her shelter even features a room (pictured above) in which any stray cat will find shelter at any given time. One day she found she had 100 cats and 14 dogs in her care and the walls of her house seemed to become smaller and smaller. In order to continue recuing animals a new abode was needed, so Said started renting a house that is now home to over 150 cats. Located in the beautiful countryside in Sakkara, a villa with five bedrooms and plenty of outdoor space for dogs to roam, Said’s shelter became a reality. Working as an English teacher to finance the care of the forsaken animals, Said employed a vet and one worker to feed and take care of the animals. Primarily, however, they now have a home.

As we enter the villa in Sakkara, excited and healthy dogs greet us at the gate. Said tells us that they were rescued only a few short weeks ago when they were left at the side of a street, unable to walk and save themselves from dying. People who were abusing the dying dogs and were questioned why they were acting that way, answering that he was “only an balady dog.” At Said’s shelter, the balady dog is a happy dog. It was also feeding time, so we witness Said’s employee feeding 150 cats with a mixture of dry food and a rice and fish stew. Kittens are also given formula, Said tells us, as they are often unable to eat at the time of their rescue. The entire villa is furnished with couches and beds, allowing for the cats to move around, be comfortable and experience what it is like to actually have a home. The purpose of the shelter is not to save lives only but to make those saved lives worth living.

Soon after giving all these animals a home, Said started consulting the social media spheres to gain support for her cause. Criticising many organisations online over their supposed care for animals while merely claiming the financial rewards, Said made a name for herself with her own page “Poor Egyptian Cats” in which people soon started to realise that Said’s work came from the heart and not the itch in her fingers to ask for money. Through the Facebook engagement, Said gained supporters in Germany, Holland Canada and the USA. Ricki Landers in the USA adopted five cats from Egypt instead of getting local cats and found States-side homes for many other cats. Supporters Amy Harrison, Monique Williams and Annette Soliman help from the States and the UK, collecting donations via a Paypal account which then finds the way to Egypt directly to be spent on medicine, food and plane tickets for cats to be adopted abroad. As donations only cover about 25% of her expenses, Said still pays for the majority of the care with her teaching job.

Every cat that becomes one of Said’s babies has a name, and she remembers all of them. Having a loving relationship with each one of her animals, sending them off abroad hurts Said, however, she knows they will be taken care of much better than she ever could in Egypt. “It’s like having a child that wants to study abroad: you know it’s the best for them so you let them go,”Said tells us, adding that, much like a mother would for her child, she takes care of the expenses herself. “People in the States can adopt from their own shelters and not pay anything. What would make them spend money on a plane ticket to rescue one of my cats?” As a result, Said collects $80 from adopting families to cover vaccinations. The plane ticket to meet the new families has to be paid from her own pocket. As she loves her cats, she gladly pays, knowing that she saved another life that would perish without her.

Asking her what inspires her to help, Said tells us she imagines being a small, malnourished cat, surrounded by people who don’t pay attention to it, possibly abuse it, and it cries out and screams for help, but nobody can understand. Those cries that are usually ignored are heard by Said who can’t help but save any animal that needs her help. Over the years she has learned what the cats need to survive. In the year she has had her shelter in Sakkara, she has helped 80 cats and 10 dogs get adopted by loving families with the help of her online supporters. The rest of them remain in her care.

Her vision for the future is to travel Europe to find online supporters and spread the word about her shelter and the general fate Egyptian street animals face. Although she has lost, she hasn’t given up on her dream of becoming Egypt’s most loving and biggest shelter without caging a single animal. However, her shelter still depends on donations to be maintained and keep growing. More adoptions will open up more space for new animals in need, so Said’s mission is far from over. One day, she says, her shelter will be known around the country. Until then, she keeps teaching students who essentially pay her to feed her cats. Mervat Said, the not-so-crazy cat lady, is not giving up and will continue to try to save the world, one stray cat at a time...

To find out more about Mervat Said’s Poor Egyptian Cats and support her cause, visit her Facebook page.