Reviving the glory days of Egypt, two brothers have single-handedly brought Cairo its own Dahabeya - a traditional Egyptian sailing boat, owned by kings and queens - having revamped and reinterpreted the golden age of Egyptian aristocracy and made it available for everyone. 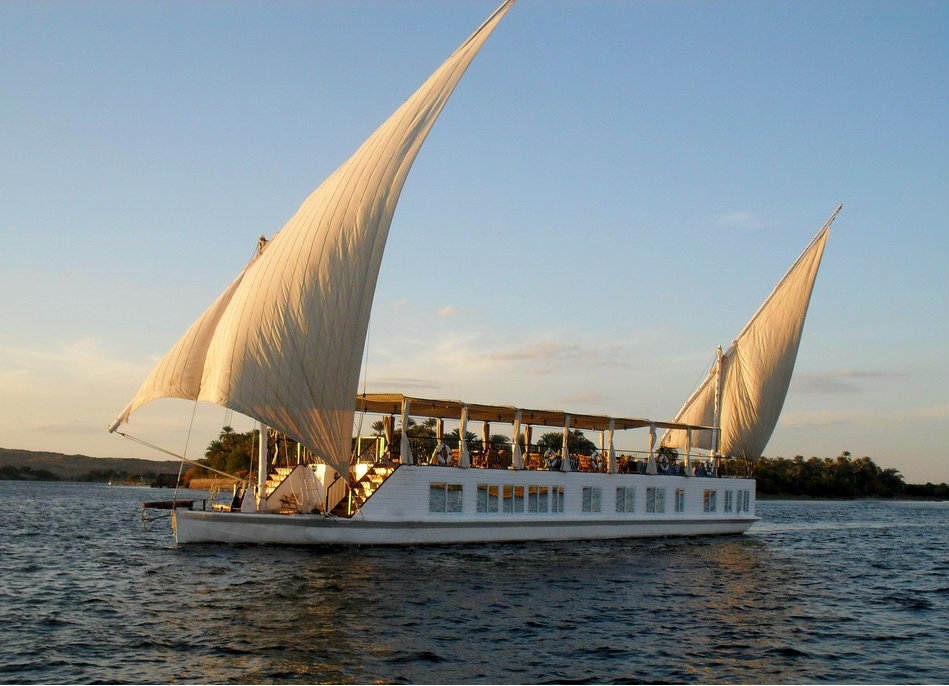 Sailing down the Nile on a traditional Dahabeya conjures up images in our heads of aristocrats from the 20s lying on a chaise longue being fanned by giant palm tree leaves and fed red grapes. Though the little fantasy bubble in our minds may be slightly skewed towards the cartoonish, Dahabeyas were indeed the vessel of choice for aristocrats and royals back in the days of the monarchy. Dial back to the 1920s and you would find both tourists and kings, lords and leaders, cruising the waters of the Nile atop the river-going sailboats. Even prior to that, Dahabeyas were a staple in Egypt’s history; since the era of the Pharaohs up until the time of King Farouk, the vessels were used by the privileged in society as a medium to float down the Nile in a state of decadence. A luxury reserved only for the elite, everyone from Mohamed Ali to Napoleon had their own Dahabeya. It was the most tranquil way for people to take in that unparalleled Nile experience; to experience the serenity of sailing along its waters and enjoy the marvels dotted along its banks. Though those days may be long gone, La Marée, a restored authentic Dahabeya is now gracing the banks of the Nile, not in Aswan, but in Cairo, bringing a slice of history out of the past and into our modern world. The sailing boat, named after the French word for tide, is owned by brothers Chady and Yasser Etmann, who found the abandoned vessel in the Delta and decided to breathe new life into it. The boat itself is steeped in history, dating back to the 30s. “It’s a historical boat – from 1936,” Chady explains. “It was built by an English doctor, Gayer Anderson Pacha. He was a high ranking officer in the British army and a huge fan of antiquities, so he built his Dahabeya to cruise the Nile and observe them. He eventually built a museum; The Gayer-Anderson museum still stands, it’s adjacent to Ibn Touloun Mosque in Cairo. Anyway we found his old Dahabeya neglected in the Delta, bought it and revamped it.”

Driven by a passion for Egypt’s history and traditions, the brothers brought the Dahabeya back to life in the Delta where they discovered it, sailed it down the Nile all the way to Luxor and Aswan, and since 2008 have been using the floating fantasy to transport people through the winding estuaries of the river; the top deck serving a spot to lounge around in the daytime, and the rooms below deck offering charming accommodations. “Dahabeyas are characterised by elegance, calmness, serenity,” Chady tells us, “It’s a very luxe experience.” But now, since 2015, Le Marée has anchored itself in Maadi, giving Cairenes the opportunity to navigate the Nile atop a boat that boasts history in every fibre. Chady sailed it from Aswan all the way down to Cairo, taking a total of three weeks to complete the voyage and it is the only Dahabeya in the city. La Marée is available for anything from small events to lunch tours, birthdays and even weddings, and can take up to 200 people aboard it. The deck is transformed for every event, but for the most part the spacious terrace channels a cosy, Oriental-boho vibe, all woven carpets and plump floor cushions and patterned ottomans. The word antakha comes to mind. And with Ramadan rapidly closing in, the Dahabeya has a variety of options for you to spend evenings sailing the Nile. You have the choice of booking for either fitar or sohour or a quick trip along the Nile in between the two. Each tour lasts two and half hours and includes a delicious open buffet spread and oriental entertainment; think the soft tunes emanating from a oud. Also, heads up, on the tour between the two meals, there will be snakes. They’re really going all out with this oriental experience thing. Also, fret not, you hookah-loving humans, there will be shisha on board. So after you have devoured a delicious meal, plop yourself down on one of the overstuffed cushions, and kick back with your own hubbly-bubbly while enjoying that sense of calmness that comes from being in the middle of the Nile, where the city’s chaos comes to a standstill. If you want to capture the same experience but on a smaller scale, the same crew also offers the same staples for Ramadan aboard a felucca. Floating down the Nile on a felucca for Iftar or Sohour is basically the most charming Egyptian tradition ever. The felucca can hold small groups from 8-25 people and you get the privacy of your boat, plus you can select your own music.

Whether it’s Ramadan or not though, you can also spend the night on La Marée as its also available as a floating hotel or you can rent it for day use. In fact, Ahmed Fouad, son of former King Farouk, comes back to Cairo, he’ll be taking up residence atop this very Dahabeya. If you’re in search of serenity, sailing across the Nile is always a good way to go.

Tour in the middle – 150 LE (includes beverages and entertainment)

Tour in the middle – 150 LE (includes a beverage and entertainment)

*Corporates and groups over 50 will have special rates.