Flown out to Milan to be among the first to experience the brand new Lenovo Yoga tablet, Timmy Mowafi learns a lot, starting with finding out what Lenovo is. 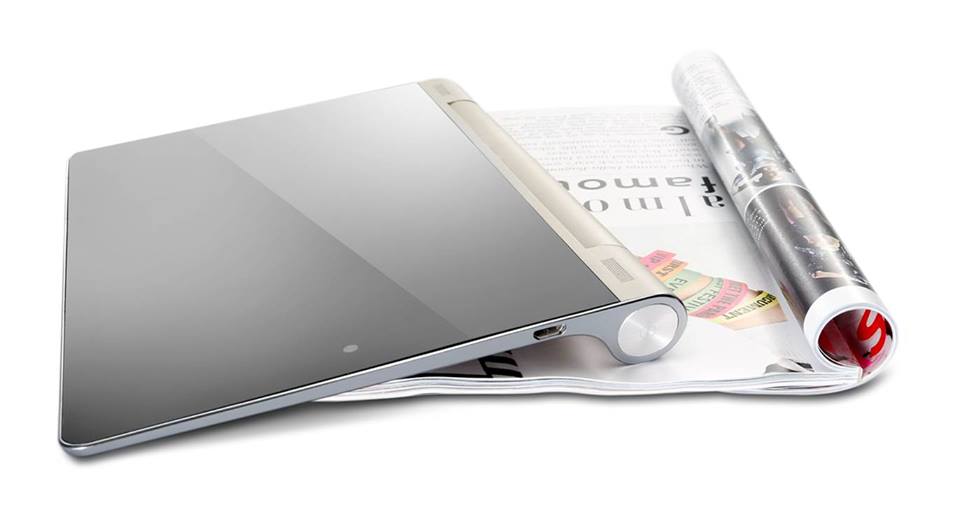 “Hello, we would like to fly you over to Milan to party for a couple of days for Lenovo… if that’s okay…”

“Err, what the fuck is Lenovo?”

I checked my schedule to see if Microsoft or Apple were flying me off anywhere that week. They were not. So soon I found myself whisked away to the fashion capital of Europe to witness a special product launch of my new favourite computer company. Lenovo, it turns out, have been around for a while, but it used to be the PC hardware division of IBM until they decided it wasn’t so profitable a division and allowed a Chinese company to slurp it up and, as vice president Jan Huckfeldt explained with a load of cool graphics and pie-charts at the event, Lenovo have now become one of the fastest growing and profitable tech companies in the world with their PC, tablet and mobile market share growing exponentially since 2009. Now, with the launch of their new Yoga tablet, they are on course to compete with the big boys in the industry.

Compete with Apple? Lenovo? Is your hardware fried? No, you see, Lenovo have a little something extra up their sleeve. All the beautiful features their new Yoga tablet has are hard to compare to the beautiful features of their new ambassador Ashton Kutcher. In an unprecedented, crude and ironic move, they got Steve Jobs to be the face of Apple’s newest competitor. The star of Jobs, Dude Where’s My Car? and every other Hollywood film that needs an insanely handsome guy to be boy-next-door; charming and stuttering, sort of like Hugh Grant, but better looking and American, Kutcher has been “hired” to be a product engineer at Lenovo. To show us that this title wasn’t ay kalam and that the actor was indeed tech savvy and a genuine influenceto the features of the new Yoga tablet, the event started with them showing a short film of Kutcher’s “first day” at work in which he feels his way around the Lenovo office in a handsome boy-next-door, stuttering, charming, Hugh Grant-esque-but-better-looking way.

It got a laugh out of everyone in the crowd then the lights went off. Lenovo Yoga tablets, lynched to columns surrounding the crowd, glowed intermittently. The lights went back on and suddenly everyone had a new Lenovo Yoga tablet in their hands. Dude, sweet! Before the event, Lenovo had been teasing the #BetterWay tagline with a few charming Vines hinting to some of the tablets coolest features. First of all, it’s called Yoga because it’s more flexible than Demi Moore in Striptease (and also uses Aston Kutcher as its toy boy). An intuitive flip mechanism means it has three modes. Hold mode, stand mode and tilt mode; so that’s three different ways you can watch porn on it, then. It has a very impressive 18 hour battery life, a wireless Bluetooth keyboard cover and comes in both 8-inches at $249 and 10-inches at $299. Despite being on the interwebz, the CairoScene team are still suckers for print and my favourite thing about it was how it felt like holding a magazine. Through a bunch of complicated equations that they showed us, the centre of gravity is put into the palm of the user. Now we’re not the biggest techies in the world and, by this point, the champagne was flowing and I got pre-occupied with a beautiful Italian girl.  Luckily I was surrounded by the biggest tech bloggers in the world and general consensus is that it’s Android OS feels fast and responsive, with very intuitive scrolling features, not to mention it just looks fantastic – sleek,  sexy and justifying its launch in such fashionable surroundings. Although the resolution of the screen and its camera quality could definitely do with some work, due it’s very competitive pricing and adaptability, the Yoga is well worth the purchase and won’t end up being the elaborate narcotics tray that your iPad has become.

To find out more about the Lenovo Yoga and where you can buy it, check out the fanpage here.