Delving into Cairo's historic gold markets, Lorena Rios discovers that Egypt's love affair with the precious metal still runs deep in most social classes, despite our shaky economy and the perpetual increase of prices. 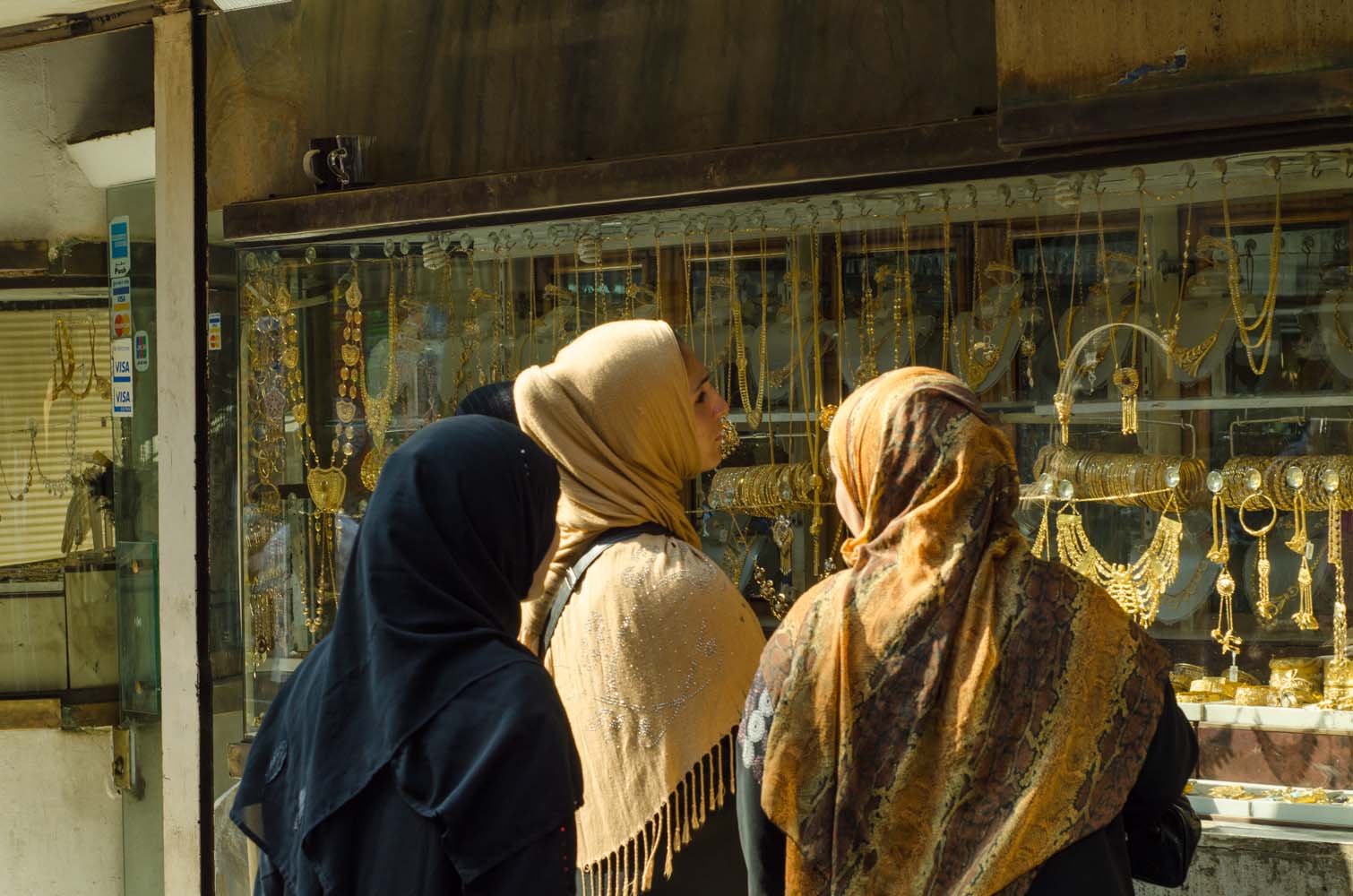 “Gold occurs in Egypt like sand on the roads,” wrote a mesmerised Mesopotamian Mitanni ruler in a letter to Pharaoh Amenhotep III in the year 1340 BC. For almost 3,500 years, ancient Egyptians worked, traded and revered gold, considering it the skin of Ra, the sun god. Today, after a four-year recession that is now touching the country´s precious oil and bread subsidies, the value of gold weighs heavily on Egyptians’ lives, not unlike the weight of surviving.

Heba, a 24-year old native of Helwan, a governorate of  Greater Cairo, is set to be married in the foreseeable future. “You can see the photos of the shabka on my Facebook ,” she says referring to the present a groom must give to his bride, mostly in the form of gold jewellery.  Just a few months ago, both families met  to discuss the price of the shabka and split the expenses of the couple´s new apartment. Only after money has been discussed can a woman like Heba show off her engagement to her friends in a party where juice flows and long photo shoots with wacky prompts, presumably taken from the western style of “partying,” are guaranteed to take place.

If the value of the shabka is deemed inadequate for the bride´s family, they may refuse the marriage. Yet, middle class Egyptians such as Mostafa Amin, a biomedical engineer, are much more pragmatic. If the man doesn´t have the money, “the bride´s family may say it’s OK,” he explains. “Some families don't look at the shabka’s price, but at the man’s behaviour and attitude.”  The dismissal of the shabka’s powerful social grasp on young couples also occurs among women. “A friend of mine told her fiancé she preferred to use the shabka to buy furniture for their new apartment,” said Heba with a tone of admiration. However, the average price of shabka for men like Mostafa is still between 15,000 to 25,000 L.E.

“After all, it´s tradition,” he says resolutely. "You can say that 90% of marriages do this in Egypt across the board.”

WHY DO EGYPTIANS BUY GOLD?

“So gold is your second husband,” says Ahmed, a middle aged Egyptian diamond seller at King Soleiman in the historic jewelry market of El Hussein. His perfectly sultry voice and sharp English may have made him sound cynical, but in fact, he’s talking pragmatically. “Gold is money, it's wealth,” he continues, with a cup of Turkish coffee in hand.  “Yesterday, tomorrow, the day after tomorrow, I have money.”

Women window shop in the gold market of El Hussein.

Om Mohamed finished selling off her shabka a few months ago to pay for her daughter’s school fees.  With three children, her gold became a savings account at her disposal throughout the years. “I got my shabka for 200 LE, 15 years ago. I sold it for 2,000 LE.”

For this reason, gold is “like Western Union,” says Ahmed matter-of-factly.  “It’s the fastest way of getting money and it´s guaranteed.” Thus gold, which women acquire as their shabka, acts as the sole safety net for protecting them from life’s mishaps.

Heba’s wedding preparations are ongoing. She began investing in gold with her first pay-cheques when she was still in university. “I began buying simple things, like earrings and rings because I liked them,” she explains. Today, she prefers to buy expensive jewellery as a way to save. “The most expensive thing I´ve bought is worth 4,700 LE,” she adds. “I bought it with my gam3eya.”

Heba’s salary of 1,500 LE  a month, like that of many young Egyptians with average office jobs, is simply not enough.  Gam3eya, or collective saving, is the only way Egyptians can raise large quantities of money fast. “Almost everyone who works joins a gam3eya,” she continues. “They can collect 10,000 or 15,000 LE.” If need be, some people may join two or three gam3eyas to raise enough money to get married.

Yet, people who buy gold as shabka are now getting less gold for the same price, explains Ahmed. Although gold doesn’t lose its value when re-sold, with only a couple of pounds lost for workmanship, people just don’t have the money to buy gold. The value given to gold by Egyptian society, mostly as a sign of wealth, when combined with the current economic situation, result in great social pressure for young Egyptians. “Some people have started renting shabkas,” says Zaki, one of El Hussein’s silversmiths. “Jewellers have also begun making silver jewellery with the designs found in gold jewellery,” he explains with a conniving smile. Now that prices are high and social pressure relentless, some people buy silver shabkas “since it looks like white gold.”

“The main reason people buy gold is for money keeping,” agrees Mohamed Sayed, the General Manager of the Federation of Egyptian Industries, Metal Chamber. Treating gold jewellery as a kind of portable savings account is a common practice among people in the East, such as India, Turkey, China and the Middle East. “Instead of saving money in the bank, people change it to gold.”

However, gold still possesses a charm that surpasses its use as a vault. “Gold is a feminine thing,” says Ahmed in his deep soprano voice , his big brown eyes warming up. “Jewellery is part of a woman’s elegance, something that compliments her character.” Om Mohamed agrees, as she kindly states that “any girl in Egypt buys gold; you don´t have to teach her.”

Cairo’s central gold market is auspicious to the foreigners who stroll down the architectural jewel that is El Moez Street in Islamic Cairo. A maze of dark narrow corridors, twisting every few meters and becoming shoulder-length at the most unexpected turns, only locals immerse themselves in the winding passages of the old bazaar. A grey metal door, like a vault’s, frames the entrance of the market; the faint glimmer of gold jewellery on the showcases can catch the wandering eye.

The gold market of El Hussein twists and bends, inconspicuous from the bustle of El Moez Street.

Behind a big mahogany desk, Mohamed Sayed sits facing a spectacular view of the Nile. “The size of the gold market fluctuates from 100 to 150 tons a year,” he says. Gold in Egypt comes from three sources, either imported as blocks of gold, imported jewellery or recycled local gold.

Egypt buys a considerable amount of gold from Dubai, the largest gold market in the Middle East. “Gold factories buy directly by phone if the price is good because it´s easier for them,” explained Sayed. Yet a lot of the gold used to manufacture jewellery comes from recycled gold, which is also exported. “After petroleum, gold is the second exported commodity,” he says authoritatively.  Thus, making use of the country’s gold mining and recycled gold, when the price of gold is high outside, Egypt exports gold. When the price is low, the country imports.

In the heart of the gold market of El Hussein, Dr. Wasfi Amin sits in a shaky wooden stool. Wearing a washed-out, button-up shirt with conspicuous stains, one would never guess that the sturdy old man owns one of the five big gold factories that control the production of gold jewellery in Egypt. “Since the revolution, the jewellers in El Hussein sell only 20% of what they used to,” he says with a stark blank look on his face.

“Saving money in gold is rare now,” he continues. “Before, people changed their jewellery more often, and bought each other gifts.” The recession that has afflicted the country and the jewellers of El Hussein for the last four years is partly due to the sharp decline in tourism, but also to the brittle economies of Egyptians.

“The difference of price between one gram of gold now and three years ago is only 75 LE,” says Mamdouh from Mina Jewelry in El Hussein. Today, one gram of 24K gold is 300 LE, roughly 40 dollars, so the problem is that, “people only have money for food, clothes and education,” says Dr. Wasfi. “Jewellry is extra.”

But the gold market is still growing, according to Mohamed Sayed. Due to life’s unpredictability, especially in a city like Cairo, the desire for security is satisfied in gold’s immutable value. Women’s vulnerability is counteracted by the shabka since, as Om Mohamed stated, “it is hers and she can do with it as she pleases.” Family emergencies or new apartments may only happen with lofty gold savings. Among more traditional communities, gold is also a sign of wealth and status, such as in the case of many women donning black galabeyas, squatting in the street selling vegetables with shiny golden earrings contrasting with their simple black dress.

Gold’s long trajectory along the fertile banks of the Nile dates back to 5000 BCE, with Ancient Egyptians using electrum - a gold and silver alloy - for the production of jewellery. In modern day Cairo, Egyptians don’t have to be Pharaohs to enjoy the touch of gold on their skin; the privilege once reserved for rulers and nobility. In fact for many Egyptians, a Pharaohs diet might be harder to come by than a gold necklace since "anyone who can buy gold…” says Ahmed, “buys it.”