Premiering last night, the long awaited El Mashrou3 TV show is teaching contestants and viewers alike the pillars of entrepreneurship, in a fast-paced, entertaining new series. We talk to some of the shows stars and producers to find out more... 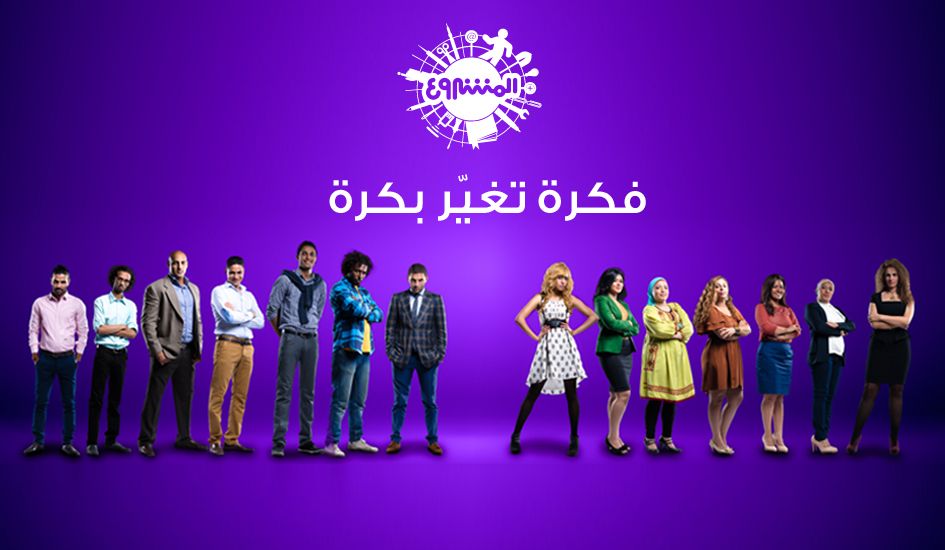 Statistics forecast Egypt will experience its highest unemployment rate by the end of this year. With up to 38 million people out of a job, the political situation still unstable and our benevolent King Sisi more interested in decorating his country with selfies than interest rates, it seems like the future is glum. There is though a bright side to being in this unwaged mess; it backs people into a corner where if you can’t get a job, you make a job. And for that reason Egypt’s entrepreneurial spirit, through all classes, is higher than ever. It seems like every one you know is working on a new website, app, initiative, restaurant or shop with high hopes of millionairedom. There’s a huge variety of start-up incubators now and even incubators for incubators. Egyptians are putting a middle finger up to unemployment and showing the initiative and ingenuity that is so ingrained in our genetics.

Last night, El Mashrou3 on Al Nahar TV premiered; a Bamyan Media/Hama Film Production production that’s set to be one of the biggest TV shows of the year. 14 lucky venturing vagabonds will feature on an Apprentice meets Big Brother meets Dragons Den series, combining the high drama and popularity of reality TV with educational content on entrepreneurship. The budding enterprisers are put together in a house in Fagnoon and given a set of individual and team challenges which put their entrepreneurial abilities to the test and purvey to the audience what it takes to launch a successful business. In each episode, a panel of distinguished guests with industry expertise evaluate their performance and cast their votes, including Fatma Ghaly, Managing Director of Azza Fahmy, Wael Fakrany, CEO of Google Egypt, and Hany Sonbati, Managing Director of Sawari Ventures who join the two main judges Hala Hattab, a business professor at BUE and Hisham El-Gamal, founder of Quest, a development and consultancy institution. The top contestant will win a major cash prize and business support. Other participants involved will also earn substantial support and resources to launch their own "Mashrou3".

The contestants were chosen based on their business ideas that reflected a positive change for the country, like Sherif Hosny, 36, whose project ‘Zee3 Enta’, is a portable kiosk that moves all over Egypt with a camera inside. The public are encouraged to go in and answer a question about Egypt and give their solutions to problems in the first two minutes and then have the next two minutes to say and do whatever they like. All this information from the public, ranging from issues on the economy to agriculture, is put online under separate categories and then they try to match the good ideas with investors. “When you have a camera crew in front of you and there’s people watching it’s hard to talk, you get nervous about what you want to say, but when you’re by yourself it’s completely different,” Hosny tells us about his project. On his experience in the show he said: “It has been great, I did ten episodes until I had myself voted out for family reasons. I also thought that the contestants would be eating each other alive but it was totally different, everyone really loved each other. Overall, I think I learned a lot.”

It’s a sentiment shared by Youstina Boulos, 25, who is on a quest for Egypt to utilise renewable energy sources starting with her project that produces bio-gas units for chicken farms. “It was very stressful and hectic being on the show”, Boulos recalls, “But I learned a lot, I learned to believe in myself and that, sometimes, an entrepreneur does not have anyone to support them but themselves, especially if they’re working on an impossible idea and if you don’t go back to yourself and say ‘this is what you want to do, this is what you’re going to go after’ there’ll be no one else to help you. I was the youngest in my team and everyone else had so much experience so I really had to push myself to be one step ahead of the game.”

The contestants and the projects on the show are hugely diverse; ranging from a Bedouin man from Arish who is setting up an olive press, to an Alexandrian who has an E-learning platform, to a young man who sells t-shirts on Talaat Harb and wants to start his own clothing factory. Representing the more high-end glamorous side of the business world is 29-year-old fashion designer and make up artist Riham Jihad whose brand, Swan House, caters to all wedding necessities. If there's one thing Egypt has in abundance, it’s female designers, but what sets them apart is their business savvy, something Riham was quick to find out. “Knowing about how to put together a business and financial plan, in an academic way, was a challenge. I didn’t know how to do this, before I just concentrated on the talents I have but El Mashrou3 gave us a lot of training in terms of that and it was amazing,” she tells us.

Sherif and Riham during filming of one of the challenges

In addition to the show, El Mashrou3’s Outreach Movement includes more than forty on-the-ground partner organszations that support entrepreneurs with mentorship, finance, training, technology and other tools to help catapult viewers’ projects from dream to reality. They’re hoping to inspire a new wave of young Egyptian entrepreneuers that will in turn boost our economy and create more jobs “It has taken 18 months of hard work and we are so excited to now share the final product with Egypt. We hope the show will encourage thousands more aspiring entrepreneurs to start new projects and more importantly, to realise their potential”, says Marwa Moaz, Managing Director of El Mashrou3 LLC. “Our vision is to support the entire entrepreneurship ecosystem by connecting a large audience to quality resources and tools”.

So next time you’re flipping through the channels, just know, as far as reality TV shows go, The Kardashians won’t teach you jack about investment proposals and middle management.

Keep up to date with El Mashrou3 on their fanpage here or visit their website www.elmashrou3.tv