How (Not) to be Mashrou Leila 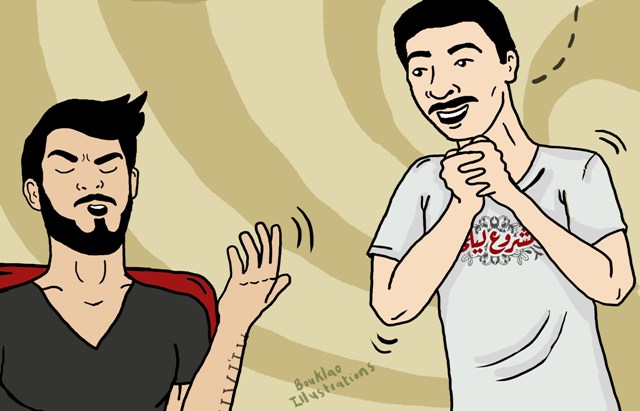 I’m with a friend, sitting with my legs crossed and my arms spread out on a bench, minding my own business outside a gig at Rawabet Theatre, smoking a cigarette and enjoying some mind blowing music. Electronic producers Wetrobots, Bikya and Diamond Version from Germany were performing together and it was something I was really looking forward to. A guy runs up to me excitedly:

I have no idea what he is saying; I look back at him blankly.

I use my poor translation skills to comprehend that he is not talking about “grilled night.” Why would he be asking me about “grilled night”? Eventually I realised that he wasn’t saying “mashwy” and the words “Mashrou Leila” finally rang a bell; they’re a band from Lebanon.

“Hmm, but you’re in a band, right? I’ve seen you before somewhere!”

“I mean I started produ…”

I contemplate making up a band to fuck with him but think it’s too much hassle and I wanted to catch the rest of the performance. So I leave it be, and explain to him nicely that I’m not in a band. He walks off, unconvinced.

Just when I’m about to get up to go re-join the head-banging crowd inside, as the music gets better and better, the Mashrou Leila fan comes running back visibly nervous and stuttering.

I’m getting kind of agitated at this point, but he’s being pretty persuasive. Maybe I am the lead singer of Mashrou Leila? A band, which I’ve never heard or seen in my life. You know what? I think I’ll just amuse him and myself for a bit.

“So your first album, look, I mean don’t mean to offend you, but I didn’t really like it, it wasn’t my kind of music to be honest.”

I did actually feel quite offended, that’s kind of rude… No, no, wait Timmy. You’re not actually the lead singer of a Lebanese band you’ve never heard. Chill. So I reply.

He carries on with a commentary on Mahrou Leila’s entire discography, as I sit there trying to embody the character of a man I’ve never seen. Yeah, I bet he sits like this, and never makes eye contact. Yeah… I’m getting the hang of this whole being Hamed from Mashrou Leila thing.

“But your second album, wow man, it was amazing, I loved…”

I cut him off.

“No, nope. You know what? Even our second album was pretty shit. To be fair, I think all the music I make is absolutely shit.”

“Ahhh you’re being shitty right, because I said that…”

I cut him off again.

“No, really I don’t even like music… I ONLY DO IT FOR THE MONEY.”

“Even your first album?” he said with a disheartened look on his face.

“YES. Even my first album, I just did it for the money. I am really quite sick and tired of this life. Hala wala, shipsy, ca va?” said Hamed from Mashrou Leila who I had already transformed into.

He gets really nervous again.

“I’m sorry, I’m sorry. I don’t know how your fans usually talk to you. I’m so glad you decided to stay in Egypt!”

“Yeah, yeah, I’m really enjoying it here,” I say bloodily, looking into the distance, while messing with my hair and messaging my fake agent on my Blackberry.

At this point, I realise I’m going to crack, so I turn away from him and pretend I am too busy being Hamed from Mashrou Leila to answer his questions. I turn back to see if he’s still there, he is still behind me, staring. I ask him if he wants my autograph.

Well, it’s a bit late for that, I think, and fuck knows what I would have written if he’d actually said yes. He walks away, staring at me the whole time. I realise that I’m in a slight predicament of having to keep up this charade of being Hamed from Mashrou Leila for the rest of the night. It’s hard enough being someone else, let alone someone who you’ve never seen before.

I walk around trying to avoid him, which meant I missed most of the performance I was there for in the first place, racking my brain for an explanation as to why Hamed from Lebanese band Mashrou Leila would be at an underground gig with German techno music in downtown Cairo. Shouldn’t he be on stage? On the top balcony? What do I do?

I waste my whole night Wikipedia-ing the lead singer of Mashrou Leila trying to find out any actual information about the band, in case he talks to me again.

Five minutes after the gig, I’m back outside having a smoke. I see my fan in my peripheral vision talking to another guy. I duck out of distance and overhear their conversation…

“I know you! You’re Hamed from Mashrou Leila right?”