We catch up with the multi-talented actress at a villa she designed herself to discuss her rise to stardom and divorce from architecture. One of her latest movies, La Camera De Claire, in which she stars alongside Oscar-Nominated actress Isabel Huppert, is currently premiering at Cannes. 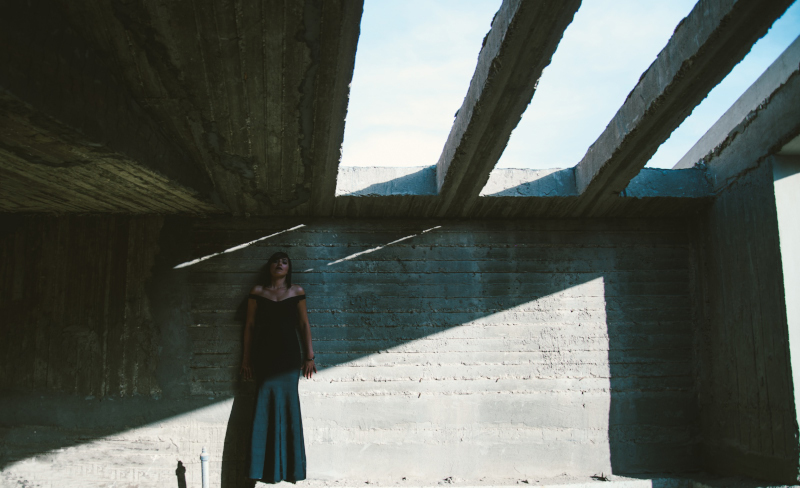 It is almost impossible for us to escape the barrage of trite platitudes we are consistently bombarded with: follow your dreams; it’s never too late; if you believe it, you can achieve it. And I don’t know whether I am merely a symptom of a jaded generation or if this is just due to my own heightened sense of scepticism about most things, but every time I hear something like this, my eyes roll so far back in my head I feel like they may remain permanently frozen in that position. Except, then you meet certain people. People like Shahira Fahmy, who is possibly the living embodiment of the bullshit you thought ‘it’s never too late’ was.

Because what else do you call it when one of Egypt’s most renowned architects, who has her own firm, helped design the AUC, has a fellowship from Harvard and a slew of international awards to her name, decides – just shy of 40 – to abandon a decades-long career in a highly respected field to become an actress. An actress. An occupation laden with risk, almost synonymous with failure; an occupation to which when children tell their parents they want to pursue, the answer is something along the lines of why don’t you do something sensible? Like architecture? But Fahmy is now starring in a movie directed by art house darling Hong Sang Soo, opposite Oscar-nominated French Isabel Huppert, that just premiered at the Cannes Film Festival. So… maybe the moral here is, if you believe it you can achieve it? She’ll probably go down in anecdotal history. “I was scared of every single thing related to taking this step,” Fahmy says bluntly. “But at a certain point, I just felt like I had to try this, even if I ended up failing. Because then at least I’d get over that voice inside my head that would otherwise keep asking well what if I’d tried and succeeded? It’s not like I’m going to get to live some other life where I can become an actor in that one,” she adds with a laugh.

It’s not like I’m going to get to live some other life where I can become an actor in that one. Fahmy’s desire to act actually precedes any inclination she had towards architecture. “When I was growing up, when I was about seven or eight, I wanted to be an actress. I was in love with Fayrouz – I wanted to be her. But life takes you to different places and I completely forgot about it,” she recounts. Fahmy’s foray into architecture, which turned into a highly lauded career, was an obvious trajectory for her – with an architect mother, and natural talent and instincts in the field, it was a perfect fit – though she claims it was for a lack of options. “I was incredibly good at math and art – and I wasn’t good at anything else,” she says. “I struggled with every other subject. At one point, I didn’t think I would graduate and go to college. I guess I actually felt grateful, because when you fail at everything else, it makes your decision so much easier; it lessens your options. Architecture was my only option. But then in college I ended up excelling at it and falling in love with it.” Over the scale of her career, the woman who initially considered herself a failure, founded her own firm, and has designed buildings strewn across Egypt, encompassing everything from the Malak Gabr Theatre at the new campus of the AUC, to a handful of restaurants such as TBS, to villas and residential condos such as Block 30 in 6th of October’s Westown. She has also restored iconic historical buildings such as the Mounira Palace. She also has projects in the UK and Switzerland and has won myriad awards and competitions, both at home and abroad, for her visionary work, has landed herself not one but two fellowships from Harvard, and she just completed a stint teaching at Columbia.

Someone wanted me to design the set for a film. And I fell in love with the script. And I realised that I didn’t want to do the set, I wanted to do the movie.

Architecture, it seemed, unlocked the potential inside of her. “I loved having an idea at the back of your head - just an idea - and then going through it,” she says with a content sigh. “I loved the idea of seeing something that was unseen before,” she muses. “I had forgotten about acting for a really long time – maybe I’d buried it, I don’t know. And one day at my office, someone handed me a film script and said they wanted me to design the set. And I fell in love with the script. And I realised that I didn’t want to do the set, I wanted to do the movie.” And much like a marriage that has reached its culmination, Fahmy realised that she needed to get a divorce to be with her proverbial mistress. But the thing about marriage is you always try and make it work, even when you know it's broken beyond repair, and when you’re so deeply entrenched in something for so long, and you see the shiny pretty thing you want glistening in the distance, you imagine that once you actually start moving towards it, you’ll realise it’s a mirage and you could never really have it to begin with.

It was in 2011 that Fahmy was handed the script that jerked awake a long dormant childhood reverie, but she pushed it aside persistently, and it wasn’t until three years later that she stopped trying to drown her dreams and allowed acting to be something she considered. “For a long time, I just felt like it was way too far from where I was. I wouldn’t even allow myself to think about it,” she explains. While giving innocuous advice to someone who worked with her one day about pursuing what she actually wanted to do, Fahmy finally got it; “I thought why am I giving her advice that I can’t follow myself?’” Fahmy moved to New York soon after and started taking acting classes at Harvard. “I kind of ran away to New York for three years because I wanted to make that shift to acting alone, you know?” For three years, she made the rounds between the Big Apple and Boston, taking endless acting courses, auditioning persistently for shorts and features, and landing roles in several short films and plays in New York.

Now, Fahmy has landed a smattering of roles across different continents. This Ramadan, she’ll be acting alongside Yousra in El Hesab Yegma3, as well as in Khairy Beshara’s Al Toufan. She’ll be appearing in Amr Salama’s much talked about Sheikh Jackson, premiering this Eid in Egypt, which stars Nelly Karim and Ahmed Malek. Over in New York, the actress plays the lead in Ijazeh by Waleed Al Qahtani, which just premiered at the Seattle International Film Festival, and just last week another one of her latest movies, what is possibly her biggest coup, La Camera De Claire, opened at the Cannes Film Festival’s Special Screening section. In it, she acts alongside Isabel Huppert, who comes hot off her Oscar nomination for last year’s psychological thriller Elle. The film's director Hon Sang Soo spotted Fahmy at Cannes last year in a café and cast her in his upcoming film, in the sort of plot twist that only happens in the movies, though the actress’ lips are sealed on how exactly it all went down. So I suppose the next time someone tells me it’s not too late, a real life reference might come to mind. “Architecture was something that I had a passion and drive for - but now that’s how I feel about acting. I want a profession where I’m having fun; where I’m doing something I really want to do,” Fahmy shares. “And I don’t have the answers but sometimes not knowing is a blessing. It allows you to do things you know, like the person who’s about to jump into the sea and doesn’t know what’s under the surface, you know? So sometimes you need to not know what’s waiting for you there so that you can actually jump.”