I Shot a Man in Paintball

Just to watch him dye... 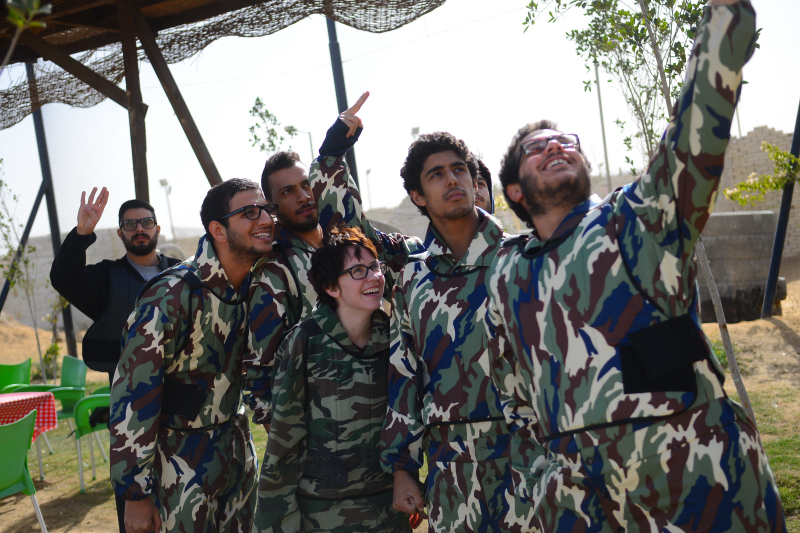 Usually, when offices want to cultivate a sense of team spirit they may go out for a nice meal or drink, do some in-house trust exercises or play some board games. Apparently our umbrella company MO4 decided that shooting each other at short distances with paint bullets that fly at over 200KMH would be an appropriate way to bond. And so on Valentine’s Day, of all days, we went off to Adrenalin Paintballing to shoot the shit out of each other.

Most ‘extreme’ activities in Egypt are usually accompanied by a ghast of surprise as the country has never exactly been synonymous with safety procedures but as soon as we arrived at the Adrenalin camp situated in 6th October, all fears were relieved, except, of course, the result of office tension and a possible bullet in ones ass as a result of having to work late that week.

The equipment is all state-of-the-art and game packages include a multitude of protective gear such as helmets, gloves and special jackets. Before you start one of their very well trained referees takes your group through all the safety procedures as well as the exact game rules so once you’re mind is completely free from the fact that you won’t die, the fun starts as you get to choose between three incredibly laid out fields including Armageddon, Village and Castle themed fields.

They really do their best to build up a sense of ‘war-time’ reality, and once the two teams had been picked everyone suddenly became a strategist figuring out the best way to capture the flag from the other team or gang up on certain members. Aside from the guns everyone gets which have unlimited amount of bullet re-fills depending on how much you fork out, each team has the choice of choosing a special marker like a sniper gun or fully automatic AK-47 shooter.

Once your done running about and playing army man, the camp also had a great little kitchen serving up burgers, nuggets, fries and all those kind of munchies perfect after time spent running about on the battlefield. It’s probably one of the funnest days out you can have in Cairo although, do be warned, some people may take it more seriously than others. We found the remains of this letter from the trenches…

Adrenalin Paintball is situated at Gate 1, El Hezam El Akhdar, 6 October Agriculture Co., 6 October City and is open Monday to Sunday from 11:00 AM to 11:00PM. For more info on Adrenalin Paintballing and to book check out their fanpage here or visit http://www.adrenalinegypt.com/. Check out all the photos from MO4's day out here.