We sit down with Labanita's Chief Executive Cows, Sawsan and Soad Abdel Haq, who open up about bullying and fat shaming in the cow community. 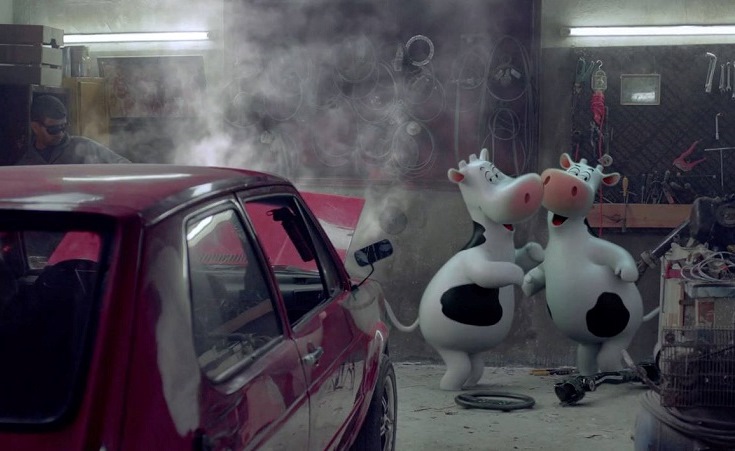 You don’t have to be a forensic expert to see that we love dairy – we love dairy so much we wouldn’t even consider hiring a vegan. The only things we love more than dairy are Labanita's iconic lisped talking cows Sawsan and Soad Abdel Haq. The cows graced our TV screens this Ramadan after a long hiatus, starring in hilarious commercials for the dairy manufacturer and making their way to our heart with their adorable lisp, witty quips, and overall affability. To Labanita, however, Sawsan and Soad are more than just two cow bosses minding their own business on TV; they’re their raison d’être – literally. And they take that very seriously.

“We wanted to bring back the beloved characters to regain the emotional link with the customers,” Mohab Shouman, Mansour Group Corporate Marketing Director tells us.

Their relationship is not just that of a supplier and a vendor, it is a strong bond in which the cows reflect the brand; “Being spoiled and sometimes me’antakheen reflects where they are coming from - the Siclam factory farm - and it essentially shows that the milk is very well invested in,” Shouman explains. “The calm, clean, and hygienic environment created a brand that conveys freshness. We believe that making dairy isn’t only about manufacturing; it’s also an art and it’s humane and the characters reflect these aspects.”

Sawsan and Soad Abdel Haq were just as difficult on storyboards as they are on screen. Their resurgence campaign was orchestrated by FP7 Cairo who had quite a head-scratching time conceptualising the complex and multi-faceted characters of the working cows.

“It was actually a fun but hectic process. First we had to revisit their past and closely study their character progression, imagining all the missing links and filling the gaps until we brought the most important part to life which is their character,” FP7 Executive Creative Director Ahmed Hafez Youness tells us. “After that we worked on how they would look now that we’re in 2016 - a very painful process, I must say, lots of sketches, red markers and 3D renders. The old cows were super cute and we definitely didn’t want to lose that and I must say we’re all happy with how they look now. And voila! - the all new but still awesome Sawsan and Soad!”

Inversely, the decision to bring back Sawsan and Soad Abdel Haq came as an easy one, “Let’s face it, everybody missed them and Labanita is just more fun with Sawsan and Soad!” Youness joked.

FP7 Cairo's creative team went to great lengths in their journey to summon present day Sawsan and Soad. "The creative team came out with an awesome question; ‘where are the cows now and what were they doing all this time?’” Hafez says. “We had loads of fun after that coming up with backstories and imaging all the trouble they could’ve gotten into until we came to the ultimate conclusion... Sawsan and Soad are just cows, they only understand dairy! So we brought them back to star in yoghurt ads!”

At first, we thought typecasting ungulates like that was a bit crass, but we soon came to the conclusion when we finally sat down with them for a one-on-two where they opened up about being working cows, and body shaming in the cow community.

Why did you choose to work for Labanita?

How do you feel about soy and almond milk?

What about people who drink skimmed milk?

How would you rate your milkshake? Does it bring all the boys to the yard?

Sawsan: Our milkshake is better than yourth.
Soad: Damn right!

What are your views on fat shaming and bullying in the cow community?

Is either one of you seeing anyone?

What did you major in in college?

What do you think of humans?

What exactly is your job title? Chief Executive Cows?

Do bulls feel intimidated by your success? Do you ever experience sexism in the cow community for being successful cows?

What do you think of Brexit?