Live Out Your Tomb Raider Fantasies At Escapers

One of the coolest real-life escape room games in Egypt, Escapers is set to help you realise all your Tomb Raider fantasies. We mean about being an actual tomb raider - nothing to do with your adolescent feelings for Lara Croft... 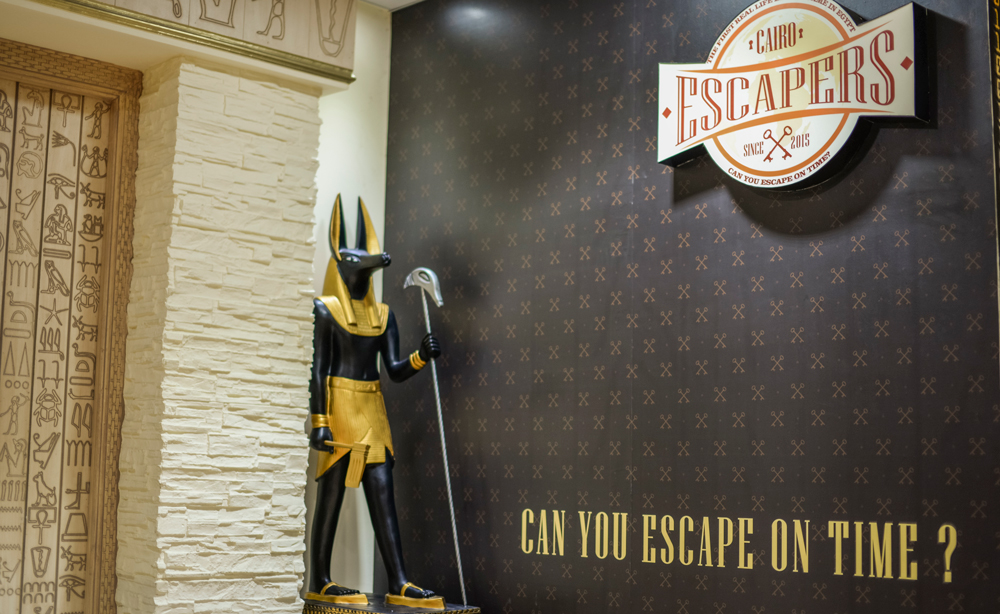 “We’re almost out of time, I don’t want to be stuck in here forever with YOU of all people!” I said to the photographer as he was pinned against the wall of Pharaoh Escathon’s tomb. We had come to 5th Settlement’s Downtown Katameya Mall to talk with the tomb’s discoverer and the man behind Escapers, the latest in real-life room escape games in Egypt, Dr. Muhammed Khalifa, and quickly found ourselves investigating the mysteries of this perplexing pharaoh.

I have a bit of a background in archaeology. I played that Tomb Raider game that came out a couple of years ago, I was really into Stargate, and I watched an Indiana Jones movie one time. After hearing of this, and of the escapades of my childhood sandbox, Dr. Khalifa asked us to head into the supposedly cursed tomb of Escathon to unlock its secrets. Being the expert rogue archaeologists that we are, my photographer - the estimable Mr. Najeeb - and I accepted. We were prepared to make quick work of this mummy and his puny curse.

“Escathon is a newly discovered pharaoh. No one knew anything about him until yesterday when we discovered his tomb inside Escapers,” Dr. Khalifa told us. How convenient, that a super-fun cursed mystery tomb turned up right here at the site of Escapers. Being too afraid to investigate on their own, they have put out a call to any and all would-be tomb raiders to brave the curse and unlock Escathon’s secrets. The great doors to the tomb were emblazoned with hieroglyphs and guarded by twin statues of Anubis. The pictorial literature on the door certainly looked like a warning. I couldn’t read it (do you spell curse with a snake or two feathers?) but Dr. Khalifa assured me that it said whoever enters the tomb has 60 minutes to figure their way out or else they’ll be cursed and trapped forever. No pressure. The hallway of Escapers is full of other enigmas, as well as our pharaonic tomb. A door, crisscrossed with yellow tape, led to the site of a CSI-style investigation in progress. Another large gate – multi-coloured and faceted, as if it was made from stained glass - to Aladdin’s Warehouse, home of the genie’s lamp, beckoned. Then there was the lab of Vlad Tepes, the mad scientist who moonlights as a Bela Lugosi cosplayer.

Crime Scene Investigation: Cairo puts the players in the shoes of an investigator tasked with solving not only a murder but also the disappearance of several other investigators who were working the case. It sounds like a pretty enthralling episode but, this time, it’s you who’s got to solve the crime and dramatically remove your sunglasses as the soundtrack kicks in. Starting at the crime scene and eventually moving to the suspect’s home, you’ll be racing against the clock to get the facts before you get murdered right in the face.

Vlad Tepes, for those of you who never went through a goth phase, is the real name of the infamous Count Dracula. Turns out the ol’ Nosferatu is still around and has developed a secret ‘weird scientist’ identity. “He was developing a new potion that could cure his blood-sucking disease, but now Dr. Tepes has disappeared and the potion is still in his home. Now we’ve hired investigators (the players) to find the secret lab within his home” is the challenge you receive as you enter.

Then there’s Aladdin’s Warehouse. An Egyptian exclusive to the worldwide Escapers franchise, players must rummage through Aladdin’s stockpile of fantastical treasures, searching for the genie’s lamp. Once it’s found, you get one wish, which for most people is opening the door so they can get into the other Escapers puzzles.

There are two instances of both Aladdin’s Warehouse and the ancient Egyptian tomb allowing two teams of up to five each compete for bragging rights in Battle Mode.

Panicking inside Escathon’s tomb as we watched the timer get into the single digits, I shook my weeping photographer by the shirt, as if rattling his brain would somehow produce the solution to the puzzles. We were about to be sealed up in an ancient tomb located in a mall next to a Cook Door and there was nothing we could do. Or was there? Stay tuned for the next episode where Skot and his trusty photographer sidekick scream, cry, and blame each other when they can't figure out the riddles of the pharaoh's tomb.