Eihab Boraie, after a lifetime in Canada, joins his first protest in Egypt. And what a day June 30th turned out to be... 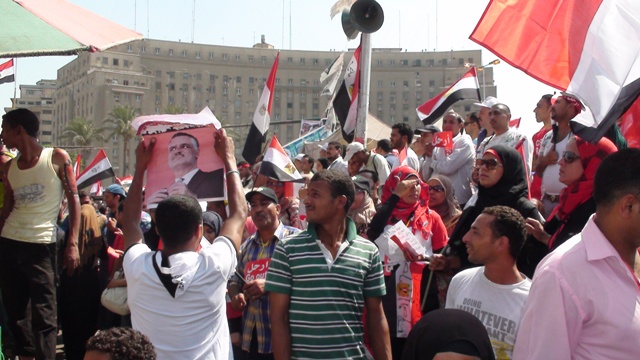 100% Egyptian but born in Canada, I have been living with a lot of guilt over the fact that I wasn’t around during the first revolution. At the time, I was in Canada, protesting against Prime Minister Harper’s support for Mubarak. It didn’t help with the guilt as I knew I should be in Egypt but I knew that it was inevitable that Egypt would get rid of Mubarak in my lifetime. I remember being in Egypt when we won the African Nations Cup and seeing the streets flooded with exuberant Egyptians wearing their jerseys proudly, taking over the streets as if it is was their property. No amount of police could stop us from celebrating, and in that moment I knew one day that we would take to the streets not in celebration, but in anger and frustration.

After January 25th I didn’t think I would ever have the opportunity to exercise the truest form of democracy with the Egyptian masses. When I heard about Tamarod happening I knew that I had to be in Egypt because I had long shared the view of the masses that our revolution wasn’t finished.

Yesterday started with my mum calling me up in the morning telling me that she was heading to Tahrir, with or without me. I pleaded for her to just give me 15 minutes and I’ll be ready. The idea of my mom heading there alone was unsettling, and so as my mum packed her purse with sunscreen and money, I packed my backpack with just about everything from a first aid kit, gas masks, four liters of water, and just about everything mentioned in the protestor’s checklist. Prepped and ready to go, we arrived to Tahrir, and instantly I realised I had over-packed. I expected to find myself in a war zone, but instead I found myself in a festival setting filled with just about every demographic and ideology represented. There was everything for sale from corn, clothing, caramelised apples to sandwiches and ice cold drinks. There was probably tens of thousands just selling red cards and whistles. It was an amazing scene as we stood there watching the Tahrir fill up until the point it became impossible to move. In the madness my mother was able to meet up with relatives and decided she would march from Masjid El-Nour up to the Royal Palace. Feeling comfortable with my mum being there with relatives, I decided to splinter off with a couple of friends and we decided to march from Tahrir to Itahadeya.

We started walking, looking for the nearest march to join. It was overwhelming when I reached a high enough vantage point to see thousands marching in different directions. It was super surreal as I was used to seeing car traffic everywhere, but this time it was hard to find cars on the streets as they were swallowed by masses marching on foot. Eventually we found a group heading to the Itahadeya and we joined along and prepared ourselves for the 20-or-so-kilometre march ahead.

Along the march, I saw people in wheelchairs, women in hijab, men with prayer marks, Christians, and just about every other walk of life. It seemed those who were too old to take part where hanging out on their balconies throwing down chocolate and water to the protestors. There was a moment where a riot police truck arrived and instead of forcing their will, they began dancing a top of their truck. It was in that moment I knew that this time it was different. It truly felt like the police, military and the people were actually together.

Further evidence were the cheers that erupted anytime a Apache helicopter flew over, and eventually began dropping flags and glowsticks. I actually had, for the first time in my life, tears of joy. Real tears real joy.

By the time I reached the bridge near Masjid el-Nour I was convinced that there were at least a million people marching in front of me, and a million people behind me, as it was impossible to see any part of the road. Honestly, a sea of people with no end. The official tally from the military estimates that there were over 17 million anti-Morsi protestors versus reported 25,000 pro-Morsi supporters. I turned to my friends and asked them if this is largest demonstrations they have taken part in. The short answer was “absolutely.” It surpassed anyone expectations and was truly historic moment for street demonstrations, and most likely biggest to ever be recorded in the world.

Deep down inside, I had wished we had just continuing marching towards the pro-Morsi rally, and end the Muslim Brotherhood problem once and for all. However, this would have defeated the revolutionary goal of peaceful demonstrations. It was ridiculous how peaceful things were when taking the numbers into account. At one moment, it seemed like a fight was going to break out along our march, and like a unified voice of reason the people were able to diffuse the petty argument and prevent any violence from taking place.

Five hours after we began marching, night had set in, and I had finally reached the Royal Palace only to find even more people than there were in Tahrir. It was almost impossible to move, and what made things disorienting was that there wasn’t a frontline to reach. I made it to the palace wall and didn’t find any resistance. It seemed like the only thing to do was to find a place to sit and wait. While struggling to move through the crowds I remember an awkward moment where my arm brushed against the shoulder of a woman who screamed as if I had violated her. I was taken aback by all this as all I was doing was keeping up with my friends with a hand on their shoulder. I wondered if her fear was warranted, but my suspicions were confirmed as I was hearing that 48 women had reportedly been sexually assaulted in Tahrir. I imagine this was happening everywhere, but again the only silver lining is that there was so many people that it wasn’t an epidemic, but was definitely something to be aware of as it could happen to anyone.

At about 10pm, my bones were tired, I needed to shower and I was anxious to confirm or disconfirm my Twitter feed. Originally, I planned to restock and head down to Tahrir to spend the night, but as soon as I got home my attention was fixed to the Muslim Brotherhood headquarters, set a blaze by propane tanks. After a bit, I packed my bag to spend the night in what seemed to be a packed Tahrir, when I got the phone call to come into CairoScene office and write my experience. As soon as the article goes online I will return to the streets, as I am preparing for what may be another historic march tomorrow. With my guilt of missing January 25th having subsided, I’m ready for more. Dear Morsi,  step down now with whatever dignity you have left.