A courageous new initiative has been launched by the creators of HarassMap, in a bid to encourage women to speak up and bite back at their harassers. 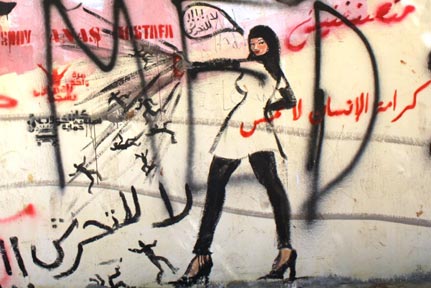 Egypt has long been a codename for sexual harrassment but a new campaign is set to kick harrassers in the nads. Anti-harrassment group HarrassMap have launched Mesh Sakta (Don't be Silent), in an effort to to get Egypt's women to stand up to spineless perverts.

The initiative aims to tackle the social acceptability of sexual harassment and assault in Egypt by giving women advice on how to deal with the plague of sickening harrassment we see all too often on Cairo streets. The campiagn's objective is to encourage women not to stay silent about harrassment as a vocal response is more likely to scare off the harrasser.

Mesh Sakta kicked off online by sharing tips on some of the many ways women can choose to take positive action and stand up to sexual harassment and assault. Women shared their own tips for what has worked for them in a series of fight back video blogs. The campaign was created in response to the widespread social shaming of the harassed which, coupled with the social, and often legal, impunity enjoyed by harassers, has silenced women and allowed sexual harassment and assault in Egypt to reach epidemic proportions.

Meanwhile the campaign looks set to grow with a print offensive alongside graffiti, and events planned for the coming weeks.

For more information and to download posters to fill in, http://harassmap.org/