Paul Antaki: An Empire of Chic

He singlehandedly changed the face of Egypt's commercial fashion scene in 1996, being the first to bring a global brand into Egypt's closed market with Benetton. Now, we speak to Paul Antaki, the man at the helm of his own fashion empire… 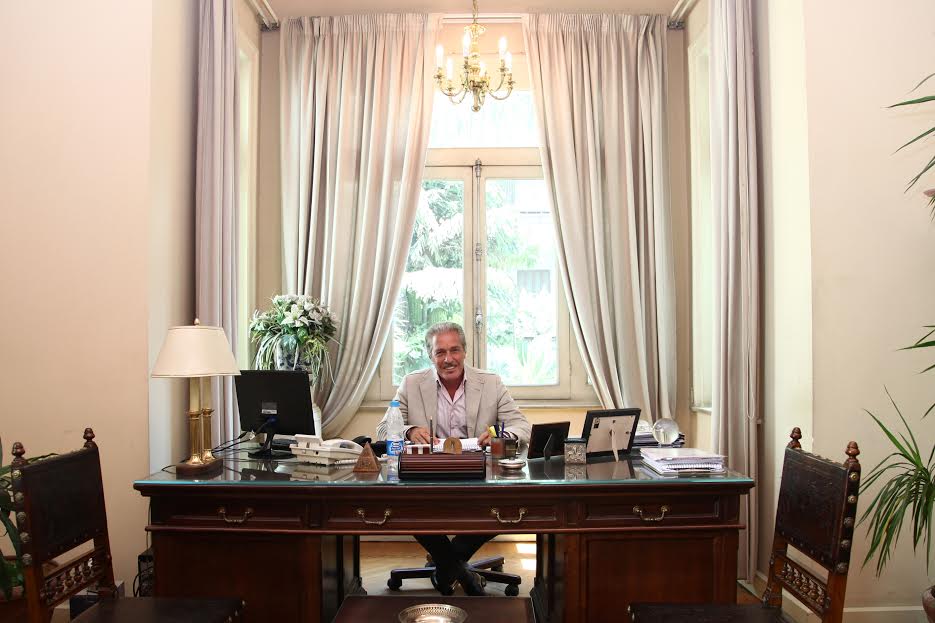 Often heralded as one of Egypt's very first fashion moguls, Paul Antaki is the man behind some of the most successful international brands to sweep our nation, bringing in everything from Converse's cool kicks, to the city chic of Daniel Hechter, and the sexy and sophisticated Max Mara. In person, he's the living embodiment of casual elegance, a Ralph Lauren type; a sort of dapper gentlemen from a bygone era, all silver hair, soft-spoken eloquence and an inherent sense of style. You can definitely picture him at the helm of a fashion empire.

We take a seat in his spacious office, the company that currently holds the reigns to Converse, OR, Max Mara and Daniel Hechter. Though our city's now saturated with stylish stores, anyone who's old enough to remember can recall a time when we all had to shop exclusively abroad because no foreign brands were allowed into the country. Before Egypt opened its economic doors to an avalanche of international brands, way before every other human called themselves a designer, there was Paul Antaki and there was Benetton.

"The first brand I actually brought in was Benetton, in 1996," Antaki explains, settling himself into a leather armchair fit for Don Draper. "It was the first international brand in Egypt under license, because the country was closed – importation was banned." Bringing in the global powerhouse of a fashion brand was the logical next step in Antaki's career. Having garnered preliminary experience in the field, with both a father and grandfather who worked in fabrics, his focus on bringing in big fashion emanated from owning his own brand beforehand.

"I had my own brand before getting Benetton – Baci," Antaki explains. "I cannot call it design, but I had an eye for choosing the correct dress for a girl, and I was able to go and buy pieces from different shops and create a collection out of it." Baci became Antaki's baby, his introduction to curating fashion in Cairo, but when the United Colours of Benetton came knocking, he made the decision to leave Baci behind, and take on the challenge of bringing Benetton into the city. "I had the opportunity to bring in Benetton as an international brand – it was booming all over the world, it was my role model. I had the opportunity to meet Luciano Benetton himself. My partner – who brought in the idea – asked me if I would give up Baci for this chance. And I gave up Baci."

It was that initial invitation that then lead Antaki to more brands – soon after Benetton came NafNaf, Mexx, and Daniel Hechter – all still under license (meaning they manufactured here) because Egypt maintained a closed market until 2005. But being one of the pioneers of the fashion industry in Egypt was no easy feat. "When fashion was still not being imported, it was being smuggled," Antaki explains, "So this was a challenge in and of itself; fighting smuggled merchandise." Added to that was the immensely pertinent factor of Egypt's permanent lag in production technology. "We used to go to the brands, to the mother companies, and look at the collection we have to reproduced in Egypt, and find new fabrics, new techniques, and ask ourselves 'how are you going to do it in Egypt?'" While their international counterparts "had the whole world working for them developing new products, we had to count on what we had," Antaki says.

But it was precisely throughout this process of learning, as a licensed manufacturer and not as an importer – which came later with brands such as Converse – that Antaki garnered years worth of knowledge and experience about the industry. "My real experience came with and from Benetton when I took the license," Antaki says, delving into the details of piece dying and other processes he got involved in hands-on. Bringing in that brand as a licensed one, and the ones following it, is where he truly learned the ropes. "You learn a profession," says Antaki, "You become an international manufacturer. You go into the processes that no one will teach you in school."

His know-how carried over to future brands, including Daniel Hechter, who let Antaki retain the license even past 2005 when Egypt opened its doors to importation. The brand began in Egypt exclusively as a men's brand. "We actually started with it as a men’s brand. Ladies was added later on."

The brand embodied smart-casual business chic. "All the men starting their working life, their professional life. Let’s say, today we cater in the city line, men from the age of 25 to 50, and we cater in casual from 25 to 45." When the women's line was eventually added, Antaki and his team worked tirelessly to give it an aesthetic that would appeal to women locally. "We spent many seasons with the designers in France…and today we're on track," Antaki tell us.

When Egypt's market finally opened up in 2005, the doors were open for Antaki to bring in more brands; from the Italian luxury of Max Mara to the youthful, chilled-out cool kid vibe of Converse, quite the polar opposite of Daniel Hechter. Antaki's empire also expanded to create Orr, a more mass-market, young, hip line, entirely produced and designed in Egypt, and one he thinks will one day be Egypt's answer to Bershka or Zara.

In expanding the country, Antaki understood that in order to stay afloat, gearing fashion towards younger markets was essential. They brought in Converse because of the inherent understanding that though it might not be his cup of tea, if you insist on letting your brand age with the consumer "then you die with the consumer." Antaki pauses and says, "It is not my role anymore to bring in new brands in Egypt. It is a youth job, I believe in handing over."

With an unparalleled eye for and understanding of fashion and the industry, Antaki understands that in this new world of open door policies and avid consumerism, you have to find a way to remain afloat. "From 2005 to now, it's a really competitive world – the whole world is there, so you have to survive," he says. And to him, it is youth and passion that will propel the industry forward. "As long as there are young people coming into the world of fashion, it will always have innovation, and they will always find something that they like because they are the buyers. It will never stop."

Though he's indisputably one of the first fashion entrepreneurs of the country, his stance on it is simply that he has played his part in pushing our nation's fashion abilities forward. "I hope I opened the door for recognising that fashion as an industry is not only important to the economy of the country, but also for the look of the country." And he's insistent that there will always be space for more. "There will always be room in fashion for someone who has a passion for it," he says. Whether designing or importing, whatever facet of the industry someone chooses to delve into "if you have the fever, you'll find the potential."

It might be easy for him to say this, as he chats nonchalantly from the helm of a fashion empire. But there's a reasoning behind it, and given his vast experience, he might be onto something. "The fashion world will never die, it will always grow. In business, they say that fashion is a perpetual growth business. Because maybe brands can have a life time and disappear, but fashion will not."