Dune Raiders Sand Boarding are hosting the Middle East and Africa's first ever tournament in a bid to turn the hobby into a fully-fledged professional sport. Eihab Boraie talks to founder Kareem Hossam to find out more... 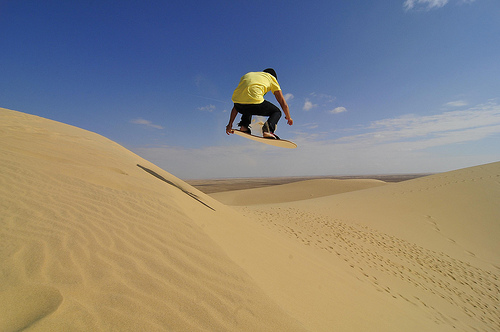 Sand boarding has, over the years, gained a lot of momentum in Egypt. Perhaps it was the introduction of the SUV that allowed Egyptians to start exploring deserts that were once inaccessible. Within a decade, amazing dunes were discovered and before long Egyptians were grabbing their boards and shredding the sand. The concept isn't new but what is new is that, for the very first time in Middle East and Africa, the international Dune Rider Sand Boarding Challenge is coming to Egypt thanks to the efforts of Kareem Hossam.

Hossam's addiction for sand boarding began after snowboarding in Germany. Returning to Egypt, Hossam was determined to find an equivalent adrenaline rush that led him to trading snow for sand. “Snowboarding is a lot easier, as the runs are a lot longer the speeds are faster,” Hossam explains adding that: “In Egypt the highest dune is around 100 meters and only last 15 to 20 seconds, and the fastest I have managed to go on sand is about 65km/h.”

In 2008, Hossam ambitiously began using social media to invite Egyptian youth to share his passion for sand boarding. In no time, it seemed that this hobby was turning into a sport that has gladly been embraced as part of Egypt's identity. Leading the charge is Hossam who is officially the only Egyptian listed as a professional sand boarder internationally, and will be honing his skills in the States with the very best sand boarders this summer.

The first time Hossam tried to bring the Dune Rider International competitions to Egypt was in 2011. Everything seemed set, until Egypt had its uprising, which ruined any chance of safely the event. Not the type to give up, Hossam dedicated himself to making this happen. It took four years of work but now Hossam can proudly announce that the international competition will see teams from all the world compete here in Egypt's Sinai desert on 21st of May 2015.

This is exciting news considering that Egyptians have plenty of sand and are very competitive. In order to ensure that Egypt will have the strongest team possible, Dune Raider Egypt will be hosting four local challenges that aims to change this hobby into a fully-fledged professional sport. The first challenge is slated for April 18th, 2014 in Qattaneya, and will see professional Egyptian sand boarders competing alongside international champion Erik Johnson, who will be performing sand boarding tricks for those in attendance.

The second local challenge will take place at the Abo Mahrak Dunes in September, where 20 riders will be dwindled down to 10 for the next challenge. The final challenge will take place once again in Qattaneya and will decide which five Egyptians will represent there country at the international competition in 2015. At each of the events, spectators are welcomed to attend and will be treated to some amazing sand boarding tricks, while being able to take in the naturally majestic desert landscape that Egypt has to offer.

Hopefully, this will be a signal to the world that Egypt is safe, beautiful and competitive. Tourism is desperately needed, and as far as CairoScene is concerned, there is no better way to do this than by hosting an international competition to show that things in Egypt are getting better.

Find out more about Dune Raiders Sand Boarding on their Facebook page here.