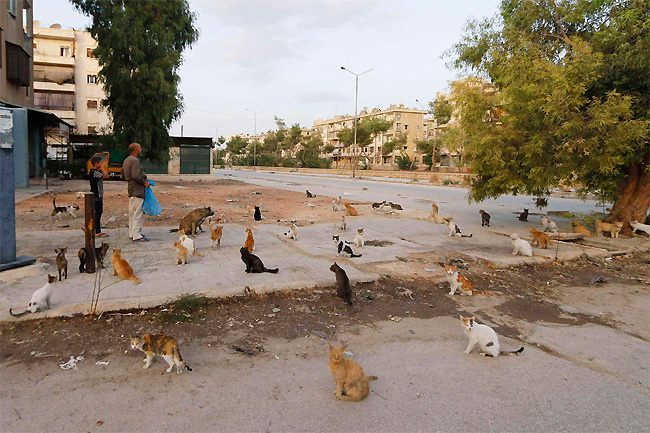 You would be hard-pressed to find someone on this earth who hasn't heard about the widespread devastation that is still going on in Syria. There are many victims in this tragedy, but often overlooked is the plight of the many animals abandoned, attempting to survive among the rubble.

Proving that human compassion can still exist amidst the horrors of war is the story of one Syrian man who has taken on the patriotic duty of feeding and taking care of Aleppo's abandoned domesticated pets. In the now unlivable and abandoned war-torn district of Masaken Hanano, hundreds of once domesticated cats rummage through rubble looking for any source of sustenance.

Answering their call for help is none other than ambulance driver named Alaa, who realised quickly that many of these animals, although lucky to survive the carnage, lack the know-how to live off the streets due to their domesticated upbringing. For the past two months, Alaa has voluntarily been driving every day to Masaken Hanano, purchasing the equivalent of $4 worth of raw meat and distributing them to as many cats as possible.

It is absolutely incredible that a man who faces nightmarish surroundings and a devastated economy would use his meagre earnings not to get out of Syria, or even stockpile his own previsions during war time, but to feed abandoned cats. This man is a true patriot with a heart of gold, and because his help the cats of Masaken Hanano have a fighting chance, because without his aid they would have surely died. Thank you Alaa for proving that good can still survive even in the face of so much evil.

All photos were taken by Hosam Katan/Reuters.