If variety is the spice of life and simplicity is the key, it's no wonder Simply Food has been cooking up a storm, feeding on-the-go city-dwellers perfectly cooked pasta and creative potatoes. We speak to two of the founders to find out more... 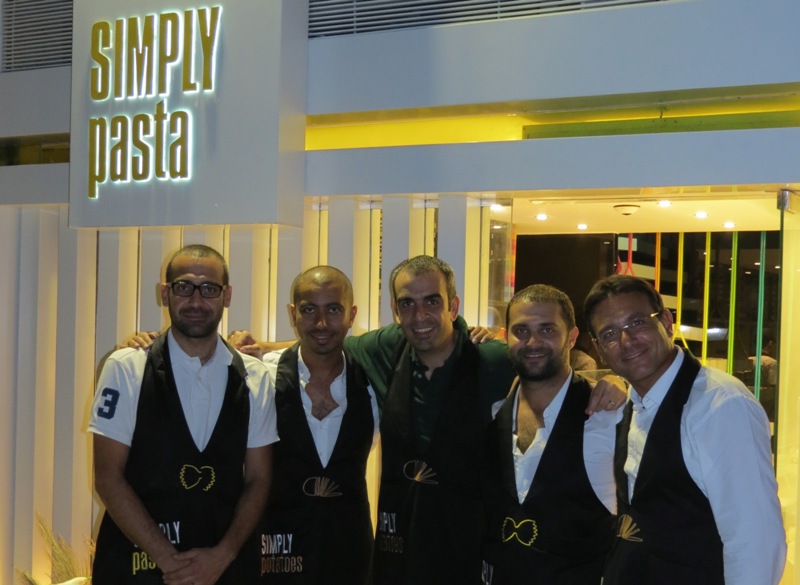 Life in Cairo is complicated. What with constant noise, streets on lock down, the labyrinth-like traffic and people trying to hock you their goods at every turn, we’ve long wished for a simpler life. And it looks like we’re not alone. Simply Food is a new dining concept, recently launched by a group of gregarious go-getters, from different backgrounds, all coming together to punctuate Cairo’s dining scene with fresh, hot, tasty food, all wrapped up to suit the city’s fast pace. With Simply Potatoes and Simply Pasta already dominating Zamalek, we talk to Moataz Thabet and Mohamed Kamal to simply find out more…

So, what’s all this “Simply” business?

Motaz:  Basically, the concept is we are building a mother brand which is called Simply Food and, underneath it, we’ll have a lot of vertical brands that go along with the current pace of life that we’re living in. Which is fast! People are in need of fresh tasty food on the go.

Mohamed: We’ve started with two outlets in Zamalek, Simply Pasta and Simply Potatoes, and they’re right in front of each other. They have exact same design, look and feel. Even the menu boards are structured in the same way.

Why pasta and potatoes?

Moataz:  We thought of pasta because it’s kind of on the identity of having a fast meal, that is also a complete meal. It also suits Egyptian culture; everyone loves pasta! For the potatoes, we had an internal debate on whether or not the average consumer looks at it as a complete meal. We decided that we needed to introduce something new and novel to the market and, to our surprise, Simply Potatoes is doing very well.  When we gave the chef the assignment of dealing with potatoes, he said: “What? You want to make a whole store about potatoes only?!” We said: “Nothing but potatoes!” He then spent around three months thinking about what we can do with potatoes. So now we have baked potatoes, fried potatoes, croquettes and  even sweet potatoes.

Why did you choose to place the two outlets on the same street?

Mohamed: To establish the concept that we’re not just store that sells food, we are a brand that will have a lot of vertical brands. We needed to do this by opening at least two outlets at once, and close to each other. When you see them as exact replicas of one another, it establishes the consistency in the consumer’s mind.

What was the most difficult thing about opening up a business in Egypt?

Mohamed: I think the most important and difficult thing about this is first finding a nice location. We wanted to start in Zamalek to establish the brand but you have limited options in Zamalek;  it’s not like you can pick and choose. The second thing is the menu processing part; how the combinations work and how it’s displayed.  The menu design took a lot of time. Finally, building the branding guidelines to make sure that it’s something that will last for a long period of time and something that we can adapt frequently.

So how does the menu work?

How is it packaged?

Mohamed: The packaging development was one of the biggest challenges we faced. We wanted it to be nice, appealing and creative yet simple. Like the brand character, it’s all about food on the go, so the packaging is self-contained. For pasta, for example, it’s a container that you can see the bottom of the bag, which closes up with a fork, knife, napkin and parmesan cheese, each in their own compartment. You walk in, take your order and carry it out as is. You can open it and eat anywhere, right away.

Where do you get your ingredients?

Moataz:  We use a mixture of local ingredients and foreign ingredients, available locally. I think using local ingredients is very beneficial for many reasons. Number one: consistency, number two: it’s important to give something back to the environment and the community. We focus on getting the highest quality ingredients, and make sure that they’re readily available in the Egyptian market. From a consistency point of view, that’s extremely important, especially after a lot of experimenting, we realised, that you can ensure that the recipes taste perfect every time.

Mohamed: We believe that we need to expand geographically first so we’re looking from Zamalek to  Maadi and Korba. We’re making the decision over the next few months, whether we’re going to open up more of the same two brands, or expand into other variants. It depends on the market. We’ve planned a lot but the current situation in the country means people’s appetites are not what they used to be. People are not ready to go out experiment and try new things. We have to take all of these factors in consideration.

Moataz: We got a thousand plus Likes on our Facebook fan page when we started, and we're over 2000 now. However, in terms of walk-ins so far most have wanted to challenge us. For example, this Italian guy walks into Simply Pasta and asks: “You know how to make the traditional Aglio e Olio?” Apparently this is a benchmark for people who know pasta. Then the guy says: “I’ll order one and if I like it I’ll order something else.” So the guy sits there and enjoys it and orders another Blue Cheese pasta.  Now he is constant customer.

Do you know what is the next “Simply” consumers want?

Moataz: We have an insight now. Our primary baby was the pasta outlet, so we gave it priority of location and set up. To our surprise, the uniqueness of potato concept took over completely. We need to reassess what the consumers anticipate versus what we think is right.

What’s are your favourite combinations at each store?

Moataz: Mine is penne pasta with parmesan cheese and sausages. As for a potato dish, I go for a sweet potato with Nutella, caramalised walnuts and Häagen-Dazs ice cream. It’s so juicy, it’s unbelievable!

Find out more about Simply Food and be the first to know about their next culinary adventures by liking their Facebook page here and follow @SimplyFoodEg on Twitter.