The Tapas Tasting menu at Risas Lounge, as well as their authentic Spanish Sangria, is about to change the way we eat in Cairo, as Liv Newitt finds out... 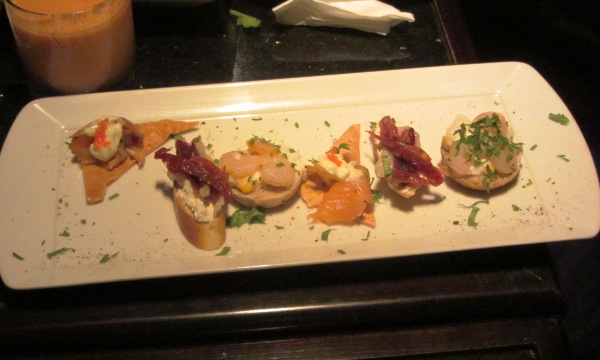 “¡Salud!” people said as they clinked their glasses of sweet Sangría together. The Spanish night at Risas was well under way by the time we walked in. The Latino vibe was radiating, the smell of Spanish food was in the air and there was a distinctly Mediterranean atmosphere helped by the Salsa tunes being played to the Sangría-lovers.

Testing an authentic Spanish menu out with the hope to open a Spanish restaurant soon, the crew behind the new Tapas Tasting nights at Risas wowed us with an eclectic mix of España’s finest exports. Among the team is Paco the chef. Yes, Paco does actually exist. Not only does Paco exsist, but he also is genuinely called Paco. Not Ahmed, Mohammed, Ramy, Abdullah…Paco. And he’s from Barcelona. Legitimate stuff. We found this extremely exciting.

With the knowledge that they have a genuinely Spanish chef, we were curious to see how this night would turn out. Having spent the majority of my childhood in Andalucia, in the south of Spain, I was there, ready and waiting to judge the shit out Paco and his Spanish cuisine.

The Sangría itself, I have to admit, was perfect balance between the flavours, just enough so that it wasn’t bitter, but sweet and fruity. A dash more vino wouldn’t have gone amiss, but that may just be the effects of growing up in an extremely alcoholic environment. Everybody knows the Spanish love their vino. A few glasses later, the Tapas began arriving, starting with a very Spanish and delicious tuna belly and white asparagus salad, on a bed of lettuce, tomato and perfectly ripe avocado. This brilliant introduction was shortly followed by a plate of beef jamón serrano, prawns and salmon on chunks of bread, that delicately portrayed what true Spanish tapas is all about. They were accompanied by artichoke hearts and squid in its own ink. I’d like to say that squid in its own ink is an ‘acquired taste’, but this is just a pretentious way of saying it tasted the way it looked – dark and scary. One thing I must say is that the gazpacho was outstanding. I take my hat off to you, Paco, you truly have bought my soul with this traditional, cold tomato soup.

Moving onto the ‘mains’ (who knew Tapas had mains?), and we were presented with perfectly cooked prawn tempura with romesco sauce, very oregano-ey lamb and not particularly saffron-ey yet stunningly delicious paella. But as the chef explained, the night before, some clearly very un-Spanish foodies had said there had been too much saffron. These amateurs have clearly never been to Spain. Dessert was soft battered but extremely creamy camembert, drizzled with jam and honey. De-licious.

The food was clearly very northern Spanish, which is not too surprising seeing as Paco is from Barcelona, and not the normal Andalucian-style fare. It was exciting to have the classier end of Spanish food on offer, ready to fill a huge gap in the market here in Cairo. With the hope of opening after the summer, we’re extremely excited to have a new option ready and waiting with Sangría and Tapas fill our Latino cravings. In the meantime, make sure you head on over to Risas to check out the slick Spanish scene, still serving the limited-time menu today and tomorrow. Insider tip – if you go between 5.30pm – 7.30pm, the Tapas is free, so long as you order drinks. Until then, “¡Si no apoyas, no follas!” (Google this).