Eihab Boraie wakes up and finds himself on a plane with Team #Jeep_Egypt, given the keys to a variety of Jeeps, and a mission to reach the top of an active volcano in Italy... 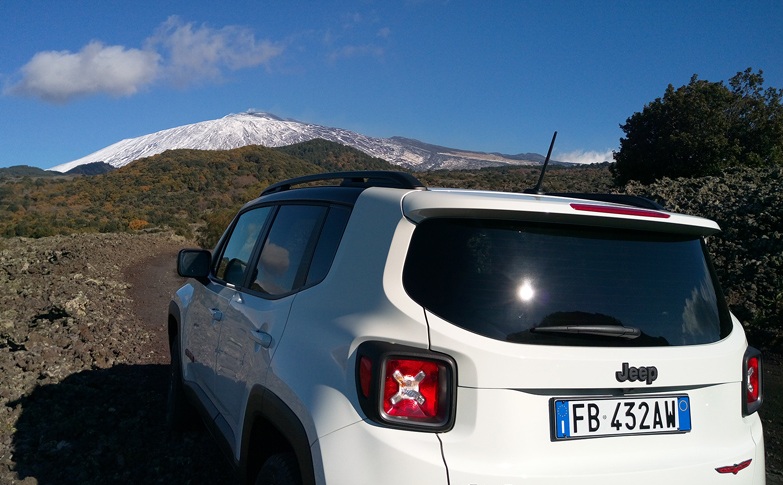 I like to think of myself as an environmentalist and, with little knowledge of vehicles beyond a bicycle, I never imagined in a million years that I would be called on to test drive cars. In the never-ending struggle of creating content and live coverage for an Internet that never sleeps, it's easy to get lost and agree to attend an event without really knowing the details. This happened to me recently when I awoke on a plane destined for Italy as part of an Egyptian media team covering the new line of Jeeps. Dreading the event, I initially thought that I would be heading to a car show or a press conference; however, to my surprise, I wasn’t treated to a multitude of boring presentations. Rather, I was given the keys to drive what felt like every model of Jeep with only one rule: no compromise. From conquering an active volcano to venturing into the thick picturesque woods, I began realising two things: Jeeps are indestructible and, more than a vehicle, the Jeep is a lifestyle. Arriving in Rome, I was taken aback by the beauty of a city reminiscent of an open-air museum, complete with a plethora of ancient statues and an abundance of well-maintained greenery, all connected by narrow and tiny streets lined with even tinier parked cars. The cars were so hilariously small that I half-expected a dozen or so clowns to burst forth onto the Roman streets. It seemed like a twisted joke that I was here to cover a Jeep event, which is when I learned that the event wouldn’t take place in Rome, but in the beautiful Sicilian countryside. The next morning, we arrived in Sicily to a hero’s welcome in what appeared to be the land of the Jeeps, but was better known as Donnafugata Golf Resort & Spa. As Team #Jeep_Egypt, it felt like we were the best Egyptian media had to offer. Although, in reality, the only one of us that was actually recognisable in the car world was probably Tamer Bashir, radio host and star of his own car show, Doos Banzine, on Mehwar TV. This man knows his cars and would be my mentor on these #JeepAdventures.

Before we even had a chance to put away our luggage, we were given the keys to multiple Jeeps and told to hurry as Mount Etna, the world’s second largest volcano, had become active that week. Unwilling to miss a rare natural phenomenon, we quickly settled on taking the Grand Cherokee and began heading to the picturesque peak of the smokey mountaintop. We followed the GPS until there were no more roads, and then the real fun began. From jagged, jutting rocks to the deepest mud pits, the caravan of team #Jeep_Egypt conquered the terrain just like Caesar crossing the river Rubicon to conquer Rome. Equipped with a dial in the middle console, all of our Jeeps had special settings (Auto, Mud, Sand, Snow, Rock, and Sport) that would, at the simple spin of the dial, tweak conditions to vanquish whatever obstacles we faced. Although the Auto function is extremely effective in all terrains, those who love off-roading will have a lot fun as the dial allows tech heads arguably more control over articulation than any other off-roading vehicle in the market. The further off the road we went, the closer we got to mesmerising natural beauty. It was though we gazed on sights otherwise impossible to reach, and this gave me my first glimpse of why there are so many Jeep addicts worldwide. Once we reached the top of the smokey but invisible inferno, we were informed that a special track was made nearby to allow us to really put these Jeeps to the test. Test driving everything from the Renegade to the Grandest of Cherokees, there was no doubt in any of our minds - the handling and response are superb, and its reinforced chassis is indestructible. The speed at which we hit the rock-strewn obstacle course would have destroyed any other vehicle, and challenged any competitor in the market in terms of durability. As Tamer Bashir puts it, “The Renegade, in my opinion, is what I would bet my money is going to be the most popular all over the world. It entered a new category and is now competing with classes where it can always come out on top, be that interior or exterior design or engine.” As we headed back to the hotel, I thought our day had come to end; however, Instagram soon taught me that it's impossible to talk about Jeeps without giving respect to king of all Jeeps: the Wrangler.

#SceneLive : Team #jeepegypt just made to the top of Mount Etna. #jeepadventures takes us 2000m above sea level with both ease and style. Loving our #jeepexperiencedays is there anyway we could keep one?

Modelled after the Jeeps used in WWII, the Wrangler is in a class of its own when talking about off-road vehicles. For accomplishing our mission of reaching the top Mount Etna, we were rewarded with an exclusive ride in the new concept Jeeps in development, including a series of “MOPARised” Wranglers that looked out of this world. Teaming up with MOPAR - a renowned manufacturer of motor parts and accessories - for each model of Wrangler, from the Black Revenge to the Rubicon, simply made them look more Jeep than ever, essentially allowing you to customise your Jeep to your lifestyle - be it mountain biker or kite surfer. The next morning, we finally got our chance to take out some Wranglers and venture into unexplored territories once again. This time, the off-road experience was even more extreme than climbing the volcano. It was hard to compare the Wrangler to the others, a sentiment shared by my colleague Bashir, who eloquently states, “The Wrangler is Jeep’s hero; if you ever mention Jeep, you’ll probably mention the Wrangler. The new model was one of the most successful cars because this was the first time they try the short block diesel engine. I lost my mind over it; it was such an amazing experience - very strong handling, suspension was tough, and engine torque was really high. It makes you love its performance especially now that it’s short, which makes it better, like they used in the first model.” Splashing through waterfalls and navigating through thick bush, every turn we made carving through the Sicilian mountainside made for unforgettable #JeepExperienceDays. I couldn’t believe it, but I actually wanted a Wrangler by the end of the trip, and although it wouldn’t be a convenient vehicle for the narrow streets of Rome, it would provide both safety and durability in the chaos that we call Egyptian streets. From Satan-built potholes to massive floods of rain (or worse, sewage), I began understanding the allure of owning a Jeep in Egypt. Talking to the Egyptian Jeep reps, I learned that Jeep has had extraordinary success in the aftermath of the January 25th revolution. For many looking for safety on roads that churn out a high number of annual fatalities - or y'know, a car that can jump the street divider if a protest is ahead - the Jeep proved to be one the safest and most versatile modes of travel in Egyptian cities. When the city madness becomes too much, these same people had a vehicle that could take them anywhere in Egypt’s endless deserts. According to car-star Bashir, “They’re two different things - on-road and off-road. When you try out a 4x4 or a Jeep, you have to go off-road! I hope their off-road adventure next year will be in our deserts because, if you try it out in the dunes, you'll really grasp the concept of 4x4.”