Amid their expansion from Swan Lake to Mountain View, we snagged five of the biggest and baddest Reebok-clad CrossFit Stars coaches behind the rise of the workout routine in Cairo to figure out the stories and secrets behind all that muscle. 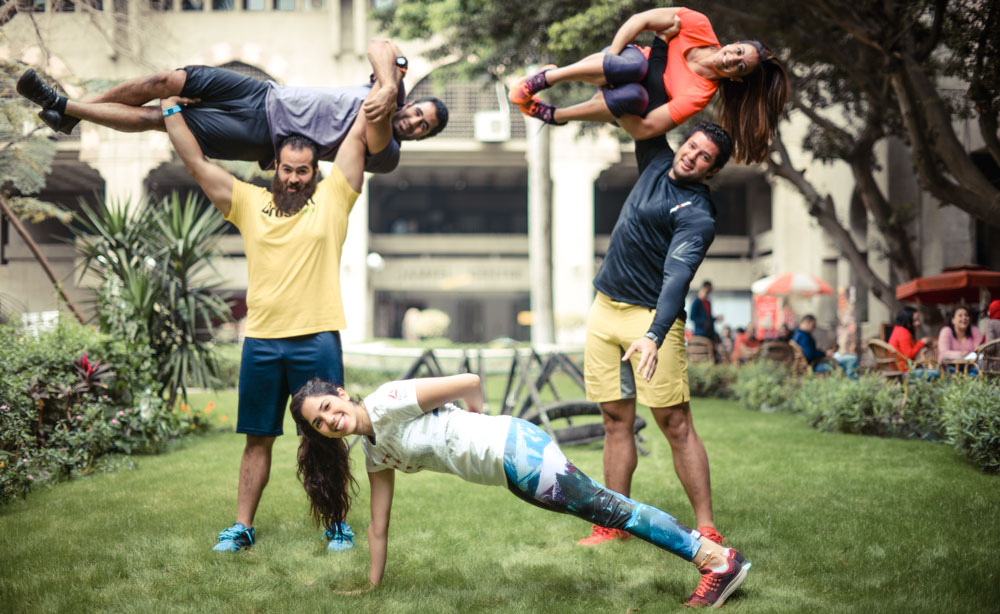 There are a bunch of incredibly fit people roaming the Cairene streets of late. They're either big and bulky or slim and toned, but they all share one thing in common: they'd kick our asses if we were all placed on the same season of Survivor. What's their deal, anyway? Where did all of these beasts start popping up from? Is there a fitness fanatics takeover we weren't aware of from our vantage point on the beanbag chairs in our office? Apparently so; it looks like these beasts are coming out of CrossFit Stars. Now, who's behind all the CrossFit Stars infiltration? We did a little digging to find out.

Placed with these guys on a season of Survivor, would you even make it out alive?http://www.cairoscene.com/LifeStyle/The-Real-CrossFit-Stars-5-CrossFit-Coaches-Reveal-Their-Secrets

Meet the CrossFitters who gave this city its toned physique and lean muscles - well, a fragment of the city, anyway. We sat down with the aggressive athletes from CrossFit Stars, all decked out in their Reebok workout gear, ahead of their big expansion from Swan Lake to Mountain View to give you - the general public - a peek into the lives and techniques of the brains and brawns behind the CrossFit movement, and to give all you Mountain Viewers an idea of what the future holds for your little community. Perhaps hearing their fitness stories and secrets will encourage us to move our asses. Ramy Saleh is a former tennis player whose career has taken all kinds of twists and turns; "after my career ended in tennis and corporate and whatnot, I started to get into fitness by doing strength and conditioning for tennis players,” he explains.

Apparently Saleh ended up in Yankeeland for a seminar when his CrossFit journey began. "As soon as I heard about CrossFit while I was in the States, I sought it out and went and did a couple of workouts,” he recounts. But if history has taught us anything, it is that one does not simply just do CrossFit once. “I immediately fell in love with it, and that was back in 2010. That’s when I decided I should bring it to Egypt,” says the Egyptian Godfather of CrossFit.

Little did he know that his effort would spark a nationwide exercise trend. “We started with nothing, and no one knew even knew what CrossFit was; to see it grow and to see that it’s contributing to the change in a lot of people’s lives gave me a sense of achievement," he says proudly. "A lot of my coaches opened their own affiliates."

His approach to coaching is equally revolutionary and refreshing; “As coaches, we sort of make the mistake of assuming that people are willing to put in the same effort as us, but sometimes people just want to feel better or look better,” he says. Saleh understands the barriers that exist between coaches and trainees; this is why he's a great coach - he gets it. “It’s very important to understand where people are coming from, what their threshold is, and what they want to achieve," Saleh explains. "Once a coach actually puts in the effort to understand what people want and where they’re coming from, they’re going to become great at what they do.” Having been a swimmer for eight years, this Danish-born athlete picked up CrossFit when she decided to not swim anymore so as to maintain her fitness levels. Little did she know it would soon turn into a habit she cannot break; “I tried one lesson, a session, and I fell in love with it,” Darwish says.

The sport soon helped her rediscover herself when she was offered a job as a CrossFit coach. “I thought it was really scary at first because they were all my friends and I had to coach them, but I did it and I loved it," she tells us. "I loved teaching; I love that I can make a difference in people’s lives." She soon realised it was addictive for far more compelling reasons; “it’s more about the community of CrossFit; everyone becomes friends," she says. "We all have this thing in common and, at events, everyone knows everyone; that’s the main thing I really love about CrossFit: everyone is really good friends, everyone knows each other, and everyone is always cheering.”

At first glance she seems docile and affable, but Darwish is not to be trifled with. “I’m a disciplinarian; everyone in my sessions knows – I guess it’s the Danish part of me," Darwish admits. "If a class starts at six, you should be there five minutes before the session. I don’t go with the Egyptian flow of ‘just drop in whenever’; no, I don’t do that,” she warns. An attitude she likes to maintain in all aspects of her job, Darwish is a firm believer that you can’t just sail by doing the bare minimum; “I like to push, especially girls, because I feel that girls are always in their comfort zone – they don’t want to lift heavy or they’re afraid to bulk, so I use most of my time with the girls to get them to understand that just because you’re lifting some weight doesn’t mean you’re going to get bulky, it takes years of training,” Darwish shares. You would think American football is exercise enough, but not to Ahmad Ezzat; the athlete attended his first CrossFit class in the hopes that it would improve his performance but, like many before him, it proved difficult to wean oneself off it. “I got hooked, so I started working out and then I started thinking about being a coach," he recounts. "Then the whole thing started."

The benefits proved to be manifold; “you actually see value in what you do, in the work itself," Ezzat explains. "You’re not doing a campaign, you’re not selling a washing machine – you are actually helping people perform better, get fit, or maybe lose weight. You actually see them happy, you see them healthy, and it makes you feel satisfied and reminds you that you’re doing something real,” he muses. But the most important reason of all – the biggest perk – is the freedom the job affords. “I got to grow a beard; when you work in a corporate office, you’re never allowed to grow a beard," Ezzat points out. "You have to go wearing a suit and tie. Now I go to work wearing sneakers, and I have my beard!”

Ezzat’s coaching techniques are all about balancing intensity and humour; “I like pushing people to the limit and pass a joke every now and then. They know they’re going to die doing the workout, but it’s fun, they’re looking forward to it,” he jokes. Just a girl who casually wanted to work out for a bit, Hamada joined CrossFit in 2015 to improve her health and lifestyle. After only a year of being part of the CrossFit family, she decided to apply for the coaching internship because she knew that was something she wanted to keep doing.

She believes that being a coach is a very big responsibility that puts one in a position where they constantly have to work hard and improve. According to Hamada, “The people we train look at us with this 'oh my God' look on their faces, and I just want to tell them we are all very normal and we get as tired as you guys get, but we just keep pushing because it is our duty to share the energy."

Hamada believes that the key element to successfully continue working out and staying healthy is largely being part of this family - a family that is always motivating one another and supporting each other to improve. Maha says, “The group of people around you are the true energy that keeps us going." Maha is a dreamer who always dreams big and works to make her reveries come true. According to Hamada, “Ever since I was a young little girl, I believed in fairytales and I live by the quote ‘if you can dream it, you can achieve it’ and I have never stopped believing in that!” Seif El Nokaly joined CrossFit in 2013 shortly after getting married because he had gained an excess 15 kg, with a goal to lose the extra weight within two or three months. After just the first session, he knew that it was just what he wanted to keep doing as a permanent hobby. El Nokaly continued to work hard for three months until he got in to ‘The Box’ (which involves using weights).

Always determined, he reached a point where he realised he was in the best shape he had ever been in his life; however, he also realised that, even then, he was still one of the weakest when compared to the other athletes around him. According to El Nokaly, “When I thought I was at the top of my game, I was in fact at the bottom of someone else’s.” Using that as motivation, he continued to work hard for a couple of more months in order to build up.

El Nokaly came to a point in his life when he realised that he would love to pick up coaching to share the beauty of CrossFit with people who are eager to learn. “When I first began to coach, I dealt with the misconception of copying workouts from the Internet and forcing people to work tirelessly," he admits. "That's until I worked with CrossFit Stars owner, Captain Ramy, who helped me learn what it was all really about.” Since then, El Nokaly has worked hard to set his own goals and help set goals for the people he coaches. “The key quote I live by is ‘never let a chance pass you by and come back to say what if’,” he shares.