The World’s Biggest Hookah Brand Is Finally Launching In Egypt 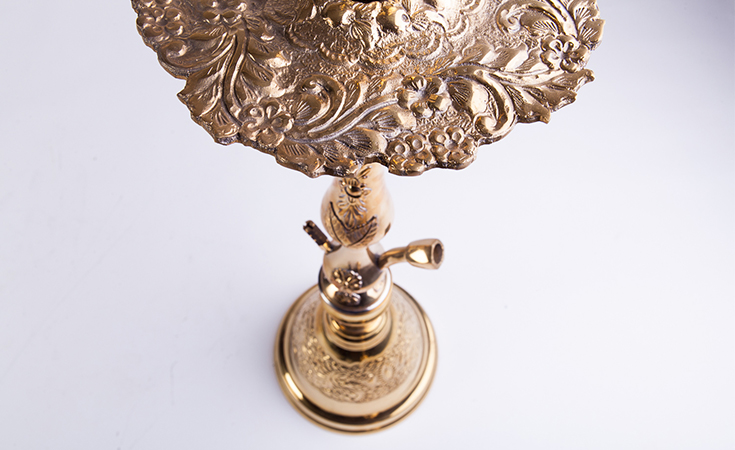 The shoemaker’s son always goes barefoot, right? What if we told you that an entire nation has been walking (read: smoking) the guilty pleasure trail completely barefoot while they had the mightiest hookah maker right at the heart of their homeland? Made up of wood, bronze, and gold, Farida’s boutique hookahs have exuded smoke swirls across yachts in Saint Tropez, Cancun’s beaches, and the Cannes Festival; but, in Egypt, only a high-end hotel has spotted this – literal – jewel: the Ritz Carlton.

After raising the bar of the made-in-Egypt national brand, Farida now sets out to entirely disrupt the hospitality sector, introducing boutique, customised hookahs to match the architecture and decoration of each location. “One of our assets is that we deal with solid brass hookahs. Most retailers only care about money, but I'm crazily passionate about this craft, and it shows in every piece,” says founder Randa Ahmed, who launched the game-changing company 10 years ago.

Farida was conceived organically, naturally born, the fruit of an Egyptian entrepreneur's passion and whit, who had taken it upon herself to make Egyptian crafts available worldwide through her retail house - Unique Design. For 25 years, the England-based firm designed unique crafts trademarked by their Egyptian artistry. Spearheaded by Ahmed herself, its designs could be seen across England, from Harrods to Boots. Following her return to Egypt, Ahmed's passion for decorated glass vases evolved into the intricate crafting of hookahs, which started off through the hand-painted traditional stories deeply ingrained in Egyptian culture. “I was designing these vases and was asked by a company abroad to export the whole hookah,” Ahmed recalls. Fast forward two years of intense immersion into the world of shisha, and Farida was born. “Farida is the translation of the company I had set up in England: unique. If my product is not unique, I won’t do it. Full stop,” says the determined entrepreneur.

Grounded in its exclusive design, top quality, and smoking efficiency, Farida taps into an often overlooked competitive advantage to stand out across borders: its passionate female founder. “What makes my shisha so special? I am the only lady in the world dedicated to manufacturing hookahs, so detail is my main asset, from the vase, to the hookah, to the tray and the pipe,” she says. "I am supposed to be a successful businesswoman, but money is the last of my concerns. I can say I design and make a new shisha every day, for 365 days a year.”

For the past decade, the brand has shipped entire containers of hookahs to Australia, Russia, Europe, and everywhere else in between, elevating the standards of Egyptian products and supporting the local labour force to craft pieces that stand at the meeting point between art and retail. “There were times, like during the rule of the Muslim Brotherhood, when sales dropped. But I kept my team producing, even double the amount of orders I had.” Running several exclusive workshops, the entrepreneur draws inspiration from a wide array of realms, including dresses and bikinis. “I develop techniques such as deep-hand engraving; there are pieces that look like embroidery in the hookah!” she illustrates. “I have a team of top artisans who paint vases to match different ideas and concepts; some of my hobbies in England were fashion and interior design, so these experiences all came together in creating these hookahs.”

“Let me tell you a funny story,” she says, unapologetically passionate. “I was once looking at a fashion magazine and I saw an amazing bikini with polka dots and a beautiful red finishing. I showed it to one of my artists and told him: ‘Let’s do this as a shisha’. A few days later, he brings me the vases and he had actually drawn a bikini!” she laughs. “But it was sold within 24 hours, so you never know how the public is going to react.”

With different workshops run exclusively for glass vase production, others deep engraving, hand painting, hose production, and gold decoration, Ahmed is attentive to creating pieces that replicate no one but her own imagination. “I was the first artist who made wooden shisha; it is a shisha entirely made of brass on the inside, but covered by Oyma, the hand-carving of the wood that is typically used for decoration in Egypt,” she comments.

The design was so influential that it sparked trends and was replicated by several other brands, making waves from Hungary to Brazil, which is the largest importer of Farida Hookahs. Now, as the entrepreneur sets out to penetrate into Egypt's shishasphere, new lines of customised products will be launched, supplying Cairo’s high-end eateries, hotels, cafés, and individual clients their own branded hookahs.