Adventure travel is literally reaching new heights as Triptanza, the first space tourism agency in the MENA region, makes leaving the Earth's atmosphere a very real possibility for Arabs. We sit down with CEO Shady AbdelGaliel to find out more. 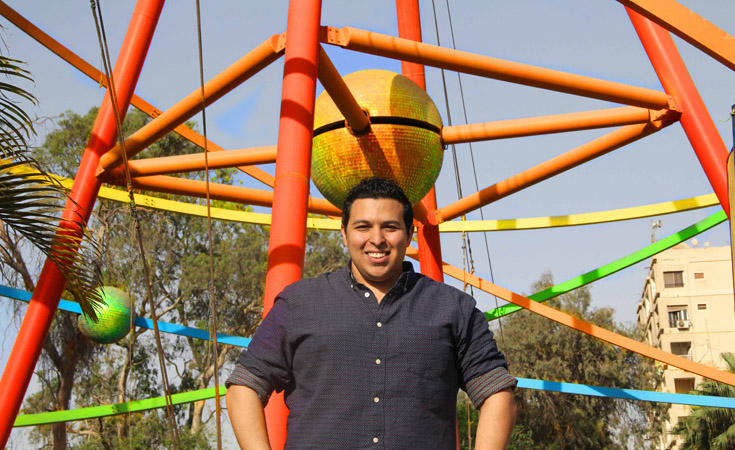 Every night brings with it an infinite amount stars that puts in perspective how insignificant we truly are. Many dream of the opportunity to relinquish the shackles of gravity but only a few have ever managed to reach its alienating vacuum. However, technology continues to advance with each passing day and has finally reached the point where space is but another tourist destination. Surprisingly this celestial destination is currently being made available to Egyptians, and we sat with the CEO of Triptanza Space, Shady AbdelGaliel, to learn more about the packages offered

Someone living in Om el Donia is on the brink of being named as the first Egyptian to reach space. Earlier this year, it was revealed that Mohammed Salem has been shortlisted as a candidate on a possible one-way trip to Mars scheduled for 2025. This week, local media suggested that the first Egyptian to reach space, or the edge of it, will be Grand Slam adventurer Omar Samra, scheduled to leave in 2016. However, according to Shady AbdelGaliel, the first Egyptian heading to space has booked their ticket with Triptanza Space and will be departing September 22nd of this year.

Founded in 2011, Triptanza embarked on a mission to provide unique packages for Arabs in search of adventure. Attending a tourism conference in Turkey, AbdelGaliel was instantly enticed by Virgin Galactic’s presentation, and sought to become the Arab world’s exclusive provider for Virgin’s space travel packages. “They were not thinking to come to the Middle East or to Egypt. It took us about two years of negotiations until we settled and signed the contracts to be the first agent in the Arab world for Virgin Galactic in 2014,” explains AbdelGaliel.

Not only was AbdelGaliel able to secure being the first agent in the region for Virgin Galactic, but more impressively was given the exclusive rights in the region for 10 years, a decision that caught Virgin CEO Richard Branson off guard. According to AbdelGaliel, “I was in the early stages of negotiation with his team at Virgin Galactic and I went to present myself. He was totally surprised that I’m only 25 years old and taking on this huge responsibility. He asked me who in my team was in charge of negotiations with me, I told him his name then he asked me if that person had met me before, I said yes then he jokingly said ‘Surely he will be fired soon'." Not exactly the vote of confidence one would like to hear from the famed billionaire, but after AbdelGaliel explained the achievements that Triptanza had made in a short period of time, Branson began to believe and personally promised him that “as soon as you reach 50 bookings, you’ll go to space on my personal expense,” recounts AbdelGaliel.

50 bookings may not seem like a lot, but the current staggering price tag of the packages offered leave space tourism affordable only to the extremely wealthy. “We have three packages that we’re marketing: Around the Earth, Trip to the Moon and a third called Journey to Mars (however you never actually reach Mars). Journey to Mars is the most expensive package costing 1,200,000 EGP and we have Around the Moon for about 650,000 EGP and the least expensive one is Around the Earth for 265,000 EGP,” details AbdelGaliel. On the Around the Earth trip, commercial astronauts will spend two days aboard the Space Ship Force, covering all the continents and oceans, while floating around in zero gravity, as they witness the awe-inspiring simultaneous sight of both morning and night. The longest trip is the Journey to Mars trip lasting 4 days and bringing you close enough to view 70% of Mars' surface without ever actually reaching it.

As one can imagine, even commercial space travel requires preparation and anyone who books a flight must undergo 9 days of training. “Training takes place on the ground in one of our space ports. We have two space ports that we can work with, one in Turkey and the other in USA.  Both space ports are fully equipped training centers that prepare you to be able to stay in zero gravity for more than one day, use space toilets, perform medical checkups, and introduce you to scheduled food programs,” explains AbdelGaliel. You may be thinking that spaceship food is going to be even worse than airline food; however the dining experience is just as futuristic as the concept of journeying to Mars. According to AbdelGaliel, “You start by taking the pills 5 days before launch to get your stomach adjusted to surviving on nothing but pills and acid water. It’s got fats and contains all essential vitamins required in 5 different pills. You take the pills and drink the water and it leaves you feeling full while decreasing the need to go to the toilet by about 90%. There is even a component in these pills related to heavy smokers to make them feel like they don’t need the nicotine.”

Commercial space exploration is still in its infancy and may leave many to question how safe it truly is. Since the start of launching test flights in 2003, Virgin Galactic has only had one crash in 62 voyages. “When we factor that as a ratio it's about a 1.2% crash ratio in relation to the number of flights that launched and returned 100% safely,” reassures AbdelGaleil about its safety. Based on the ratio, space travel appears safer than traveling by car on an Egyptian road. After returning to Earth, all space tourists will get three certifications including one from NASA marking their achievement as commercial astronauts.

The steep price tag will come as an obstacle as only a very few in Egypt can actually afford to take the trip. Considering that previous celebrities have doled out millions of dollars for a chance to reach space, the prices being offered are competitive thanks to the uniqueness of Virgin’s Space Ship Force. “Space Ship Force can take 22 persons, unlike the research space ships that takes 2-3 persons so it’s more economical.  At the moment it costs on average 260,000 EGP, however we expect in less than 5 years for it to reach 150,000 EGP, and in less than 10 years for it to reach about 50,000-60,000 EGP maximum,” believes AbdelGaleil. That being said, the higher the demand becomes, the more likely it will take years to book a flight, as they can only seat 10% of what you could on commercial airline. However, rumour has it that China is developing their own space tourism agency and with competition comes competitive prices that may make this once in a lifetime journey more affordable.

In order for Triptanza space to become viably sustainable, they hope within three years to make 12 bookings annually. As it stands, they already have five booking in process, however their identities are still shrouded in mystery. “I can’t mention their names because we have a confidentiality contract with anyone we book and we can’t announce their departure without written consent,” explains AbdelGaleil, adding, “All I can say for now is that it won’t be a Mubarak.” The fear of disclosure generally stems from politicians or businessman, who during these current tumultuous times would rather keep the extent of their wealth a secret in hopes of avoiding a public backlash. However, AbdelGaleil tells me that, "We’re getting the final approval to announce a well-known figure in the Arab world and another prominent businessman in Egypt who will officially be the first Arab and Egyptian people joining these trips. We hope to make the announcement within a month.”

When the news first emerged that Triptanza would be offering space travel, many believed it was an April Fool’s joke. Even I was skeptical as I headed to interview, but the longer I listened to AbdelGaleil the more I began believing and dreaming that one day in the distant future, I too may reach the stars. To spread awareness, a big conference called ETS, Egyptian Travel Summit, will be held at the Mena House on August 29th, where Triptanza Space will officially announce their launch and hopes that Richard Branson will attend the event.

Space travel is still out of reach for a massive majority of Egyptians, but that should be expected when establishing a new out-of-this-world tourism market. It was Star Trek that immortalised the saying that space is the final frontier, but thanks to Triptanza Space and Virgin Galactic, this September space will be the beginning of an Arab frontier.

To learn more visit their website by clicking here or check out their Facebook page here.
Photography by Mohamed Aminn