Causing waves of controversy in the predominantly Muslim country, Yanki Bayramoglu speaks out. 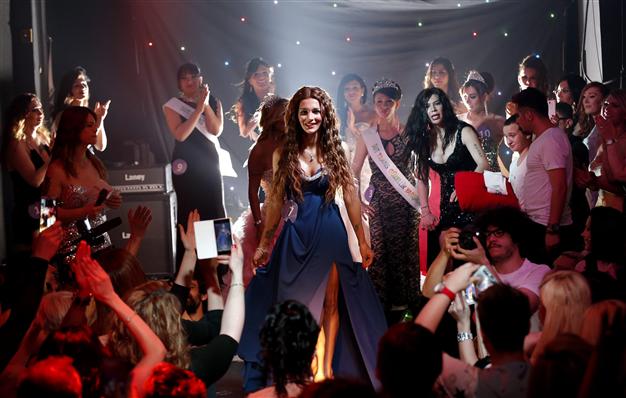 Meet the transgender model who plans to leave Turkey's conservative hardliners feeling more than a little hot under the collar. Yanki Bayramoglu created waves in the country after scooping the top prize at a beauty contest, held as part of the country's Gay Pride celebrations last week. Speaking about her win, the bubbly brunette claims she didn't even know the competition rules when she took part in the pageant to raise awareness of the plight of gay and trans-people in the predominantly Muslim country.

"I participated because I thought it was very important to be visible and create awareness that there are trans and LBGT people living in this country. I dedicated the beauty crown to my all trans friends who have been victims of hate crimes. I have no idea what the criteria were.  We just had to walk on the catwalk with swimsuits and then gowns. All I know is I was chosen among 13 finalists."

And now Bayramoglu plans to pursue a career in acting and even hopes to become the country's first ever professional transgender model. "I am going to keep on dancing and acting. But I would like to be a model. There are lots of trans models in the West. Why should it not work in Turkey?"

Bayramoglu's groundbreaking win comes just weeks after Austrian singer Conchita Wurst took home the top prize at this year's Eurovision song contest. However, the pretty 23-year-old paints a grim picture of life for gay and trans-people inside the traditionalist Turkish state. "It is really hard. We have to hide our sexual identities and most of us face social and family pressures. If we become visible then we have to live with the threat of hate crimes. Many of us get killed because of that. It is quite scary," she added in an interview with Vocativ magazine.

Meanwhile Bayramoglu was quick to denounce claims by many hardliners that homosexuality is rare in the Islamic world. "People think there are not many LBGT in Turkey, but they are wrong. There are lots of us, in high positions in society and professional life.

Shockingly Bayramoglu reveals that the stakes are so high within the conservative state that not even her own BOYFRIEND knew about her past prior to her win. "Well, my boyfriend had no idea [that I was trans]. He is shocked. He accepted it and we have a good relationship. My neighbours told me that they had no idea."

Despite a largely positive reaction from fans - Bayramoglu claims that she still fears possible attacks from religious fanatics. "People point at me on the street. Some want to take pictures with me. So far I haven’t gotten any bad reactions but I am a little bit scared of possible attacks."

However the starlet claims she is unwilling to back down in her battle to drag Turkish attitudes towards the LGBT community into the 21st century. "We have to try to break homophobia and transphobia. We live only once and we have to try to make a good life."