Twingo - the First Egyptian to Conquer the Atlantic

It was the winter of 1991 when Waheed Wahba and his trusty boat Twingo left Florida and set sail towards Hurghada - a grueling two-month, 7,400 KM trip. This is the seldom-told tale of the first Egyptian to cross the Atlantic, solo... 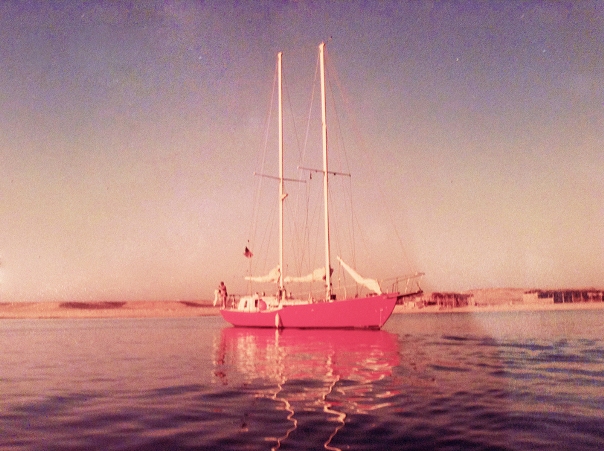 In the classic American novel The Old Man and the Sea Ernest Hemingway famously penned: “Man is not made for defeat. A man can be destroyed but not defeated.” These words continued to rattle in my brain as I sat down with Waheed Wahba, the first known Egyptian to sail alone from Florida to Hurghada, to learn all about his harrowing tale of conquering the Atlantic during the frigid winter of 1991.

As a child growing up in Heliopolis, Wahba developed his passion for sailing the high seas at an early age, thanks in large part to the adventures of Captain Adam Troy. At the time there wasn’t much on Egyptian television, however that was of no concern to Wahba, who rushed from school to make sure to catch each episode of his favourite show, Adventures in Paradise. The American series starred Gardner McKay as Adam Troy, captain of the schooner Tiki III which, as Wahba explains, “Used to travel the whole world in search of adventures in every port that he stopped in. The only difference is that he had a monkey that travelled with him but I didn’t have one. On my trip I was alone and realised quickly I was the monkey.”

Although seemingly destined to a life at sea, Wahba wouldn’t embark on his epic trip until reaching his mid-40’s, while he was living in America and dealing with his divorce. “My wife decided to leave, taking my one-year old son. When everything starts to turn negative in your life, you start thinking that you want to just take off and go away. So I sold the house and took my part of the settlement and bought a boat with a steel haul which I named Twingo after my son,” reminisces the adventurer.

It only seemed fitting that a divorce would lead Wahba to the sea which Hemingway’s describes in the Old Man and The Sea as ‘La Mar' which is how Spanish-speakers refer to the sea fondly. Some of the younger fishermen spoke of her as a contestant or a place or even an enemy. But the old man always thought of her as feminine and as something that gave or withheld great favours, and if she did wild or wicked things it was because she could not help them. The moon affects her as it does a woman, he thought. In Wahba’s case, the divorce - although heartbreaking - gave him the opportunity to heal emotionally, fulfill a childhood dream while seeking the warmth of another woman; La Mar.

With a plan to set sail in the winter, there would be little warmth on his 55 day journey. “I did some reading about the weather and I found out that winter is the best time to travel because there aren’t any hurricanes or big storms. You have to stay outside to control the boat, you can’t hide anywhere. You can’t go and just get warm. I was wearing so many things, but it’s not what you wear, it’s more like how much physical work you have to do to stay alive,” passionately describes Wahba adding, “I didn’t find any icebergs but I had snow on the boat. I had like 4-10 inches of snow at the time."

Carefully zigzagging his way across over 4,000 nautical miles (7,408 kilometres) and constantly attempting to keep his five sails up at a 45 degree angle to the wind, Wahba’s journey would come at a time before GPS was available. Using a compass and sextant for longitudinal and latitudinal daily measurements, Wahba navigated his course on his map by hand, making adjustments to account for the dreaded stillness and ferocious storms. “When you have no wind, you’re standing still in the middle of the ocean. You’re using all your water, your food, all your savings. You’re using them but you’re not gaining any miles. However, in a storm, waves as high as my sail would slam Twingo and I’d look at the compass and we’d be turning 180 degrees. From one wave to the other we just kept spinning; staying on course was impossible and put us days behind.”

Overcoming both cruel acts of nature, Wahba and Twingo would continue on their mission only to find themselves on yet another set back that may have ended up saving lives. “When they saw me from far away it was like they saw God. At least 2,000 nautical miles from any shore there were two people on the boat, a man and woman. They were jumping up and down, waving at me to come closer to their boat. Sometimes you have a little fear of getting close to other boats because of piracy, but they had no power and no wind so they could not sail, and no propeller so they couldn’t use their motor. They were just sitting still. I towed their boat and brought them aboard. I gave them food and water and towed them for two days.”

When the winds picked up, both boats sailed but at this point Wahba's supplies were running low and although the sea provided plenty of fish to eat, water became scarce and proved to be more punishing then all other challenges. “I ran out of water 18 days away from the coast of France. At that point my only option for survival was to change my course and immediately head to the Portuguese island of Azures, 15 days west of France.” With cracked lips, dry mouth, and severe dehydration, Wahba took to drinking one cup of sea water a day, which arguably can cause more harm than good. After three days without water, Wahba made it to shores of Azures just in the nick of time. After restocking his supplies, he set out only to find himself in the middle of yet another storm that would once again punish his body. “During one of the storms I lost my navigation light on the top of the mast. While trying to replace the bulb, I was wearing a special harness but the rope broke and I fell from about 10 meters breaking two ribs,” painfully remembers Wahba. For the next two days the adventurer would sail through the pain, finally reaching a small fishing port in France in seek of medical attention.

Advised by doctors to wear a brace and to stay away from sailing, Wahba threw caution to the wind and decided to recruit a Frenchman to help him on his last leg of his journey, a decision he would later regret. “If you ever take a trip like this I recommend doing it alone, because it’s very difficult to have someone with you for a long period of time because you have your decisions and he has his own decisions, and the longer the journey, the closer you end up to killing each other!”

At this point, it may seem like the journey wasn’t worth taking considering the toll it took on Wahba’s health. However, he points out that “if I could, I would do it again. The beauty and peacefulness is hard to convey in words. Often dolphins would swim along my boat and I saw a lot of whales. I used to jump in the water with my snorkel and look at the whale. He had eyes as big as my head!” he declares.

The longer we talked, the more memories, including one strange, unexplainable night, came flooding back. “In the middle of the ocean one night, all alone, and all of a sudden a very strong light that was greenish-blue lit the whole boat. I don’t know if it came from heaven, a superpower or U.F.Os. I have never seen a light like that. It’s not fluorescent light, it’s not white, but a green light focused on my boat. It was very strange,” a baffled Wahba attempts to describe. Claiming that the light wasn’t the result of a hallucination, Wahba says he wasn’t dehydrated and it was before breaking his ribs, though it might have been caused by exhaustion. “I slept for only two hours a day. You have to put the sails down and tie your wheel all the way to one direction, so the boat will drift and keep moving in a big circle. That way, you keep your course as close as possible,” the explorer explains.

When he finally made it to Hurghada, Wahba was short on funds and decided to spend the next couple of months using his boat to take tourists on diving tours. He took on the name Twingo himself and renamed his tour boat Twingo II. In order to acquire the permits to offer tours, Wahba regretfully mentions that “I had to pay duty to have the Egyptian flag. However, after I paid duty for the Egyptian flag I was informed that if I were to take the boat out of the country I would have to put the price of the boat in the bank because it’s considered as a national treasure.” This ludicrous policy was but one example that demonstrates just how corrupt Egypt had become under Mubarak’s reign.

Expecting a hero’s welcome, Wahba’s incredible feat was only covered by a German magazine and Jannet Farag, an Egyptian TV host of a show called “Khamsa Seya7a" (Five Minute Tours), who dubbed him the “Sindbad of Egypt.” Despite being the first Egyptian to accomplish the journey and having an amazing story to tell, Egyptians seemed mildly impressed, unable to grasp how insanely difficult of a trip it was to make.

Remaining in Hurghada for almost a year, Wahba would find himself emotionally and spiritually healed ready for a new love, that would sadly end up becoming jealous of his mistress, La Mar. According to Wahba, “In order to get married, I had to decide whether to keep the boat or to keep the wife. Upon reflection, I should have kept the boat instead of the wife.” However, coupled with the fact that he would have to put the value of the boat in the bank, and unable to adapt to a population that doubled in size since he was a child watching Adventures in Paradise, Wahba was left with no choice but to sell Twingo II and return to America; a decision he would always regret. Nevertheless, the open seas gave him an adventure he would never forget, proving that, although his body was destroyed, his soul remains undefeated.