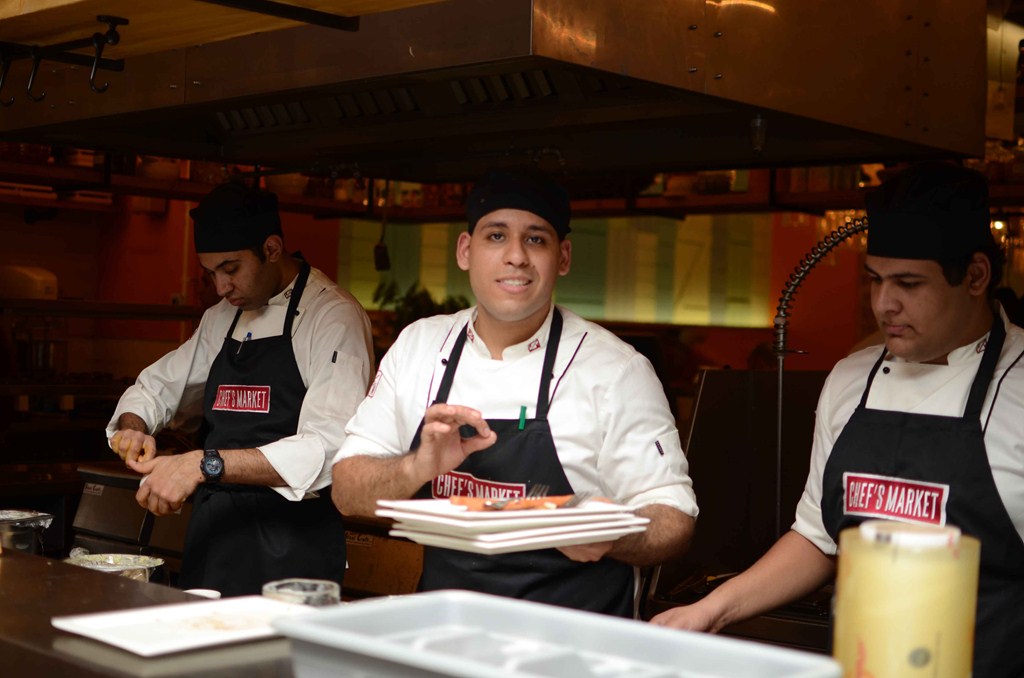 Cairo is a tough town. We are a city of complainers. We are constitutionally grumpy and find fault with everything. We go to weddings, dance, drink, eat, then text our friends on the way home making fun of the bride’s dress, the DJ, the food, and the flowers. It’s just what we do. And this carries over into everything else. Anywhere in the world, at any given restaurant, at some point a waiter will approach the table and ask, “Was everything all right?” In Cairo waiters ask, “Was anything all right?”

Cairenes like what they like—and woe to any restaurateur who dares go outside the system. Shisha, pizza, burgers, veal escalope, spaghetti bolognaise; anything that is familiar. Add multiple wall-mounted television sets with the sound turned down; loud background pop music; bright, mismatched fabrics; a bit of chrome; and some dubious art by the owner’s girlfriend who thinks she’s an interior designer and there you have it: it’s a formula for, well, if not success, at least it’s a formula, and that’s what this city goes for. We are creatures of habit.

So opening a new place with a new idea that breaks expectations takes some serious self-confidence and commitment. Or else a great deal of foolishness. And yet executive chef Wesam Masoud and his partner Wael Fikry have done it.

The concept is called Chef’s Market and it is located in the newly launched “Mosaique Dining Zone” on the 4th floor of CityStars mall. This is a bold move. The restaurants above the posh section of CityStars have never done exceptionally well, mostly because the same people who are buying LE 1500 jeans at Desigual and Boss are having a hard time fitting into them after they sneakoff to the food court and gorge themselves with Burger King and Papa John’s. Healthier and pricier options available on the 4th floor like Wagamama and Nordsee have gone down in flames.

The difference now is that instead of trying to entice shoppers to come to the 4th floor for food, CityStars is offering a chilled place to hang out and have lunch as a destination in and of itself. If diners want to do a little shopping afterwards, or see a movie, that’s great, but this sprawling new indoor promenade—which is a cut above what is on offer elsewhere and marks itself off from competing malls Sun City and Cairo Festival City—is more like a village, or maybe an island, a little Zamalek in the heart of Nasr City.

And Chef’s Market is it’s cornerstone; an airy, spacious, Mediterranean trattoria, or taverna, or bistro, depending on what you’re in the mood for. Thoroughly rooted in the slow food movement, its philosophy is fresh and local.

French-trained Chef Masoud has flashed onto the Egyptian food scene in recent years with stints in numerous kitchens and his own cooking show, Matbakh 101, on the satellite network CBC Sofra. He envisions Chef’s Market as a place where he can pull whatever he wants from the market place, oversee its preparation in the large open kitchen with its classic French brigade (chef de cuisine, sous-chef, cuisinier, commis, and saucier,) and serve guests in a large, warm dining space with plenty of pastels, glass and wood, plants, candles, and family-style tables.

So what you have is a clean, upscale, neighbourhood restaurant with home-made artisanal breads, fresh juices, hand-brewed coffee (Single Origin out of L.A.), and a menu that tours the beach towns of Europe, North Africa and the Middle East. Roasted garlic and smoked herring hummus, yoghurt, honey,tapenade; grilled chicken with halloumi and apricot dressing, tilapia with caramelised onion and couscous, grilled tenderloin wrapped in beef bacon; and desserts like coconut-infused panna cotta with kunafa flakes. It’s all there. The modern Mediterranean on a plate, done locally with local ingredients by local chefs.

How this will play out among the afraid-of-anything-new local clientele remains to be seen. Text me on your way home and let me know what you think. As for myself, maximum respect guys. May the fork be with you.