We Want Your Blood

When we learned the shocking statistics surrounding blood supplies in Egypt, we called The Triple Effect - an organisation specialising in remote blood donation facilities - and want YOU to come to our office and give blood on Wednesday 13th August. 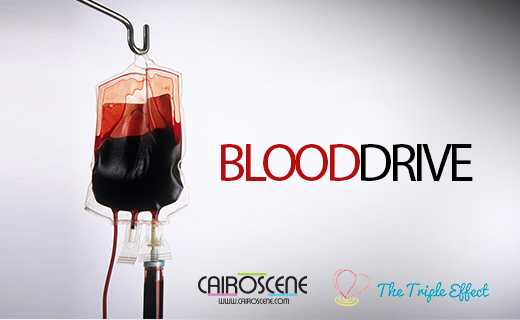 You know those terrifically annoying broadcast messages you get on your Whatsapp, randomly requesting blood, which for whatever reason, possibly due to either indifference, a lack of trust, the impersonal nature of them, or zero knowledge about the issue, end up instantly dismissed by the majority of us? The reason these messages get sent out is because there is a massive shortage of clean blood available in Egypt; we've got a population of 80-million strong yet only 1% of them are donors, which is such a measly percentage it's almost embarrassing. According to WHO, a minimum of 3% of Egypt's population is needed to donate in order to sustain the country's blood supply and we're currently at one third of that. Now we want YOU to join us in doing what we can to help.

We'll be honest; we were entirely unaware of all of this until we stumbled upon The Triple Effect, a project initiated by the Takatof Foundation that works to provide access to safe blood for every person who needs it through working with companies or organisations to raise awareness about the issue and arrange blood drives. "The most important thing is to raise awareness so that people know about the issue because otherwise they won't be encouraged to donate," says Reem Abughattas, one of the leading team members behind the initiative. Essentially a huge part of the problem lies in the mere fact that knowledge of the dire degree of the situation simply doesn’t exist.

In light of this, we'll be hosting a blood drive at the CairoScene office next Wednesday 13th August; if you'd like to participate and y'know, do a little good to counter all the haram stuff you'll be doing this summer, feel free to drop by anytime between 11 AM and 4 PM. We'll be holding an awareness session Monday at noon if you'd like to know details before coming – if you wanna skip this, that's cool, but let's refrain from booze and drugs for two days before the actual donation. We know, it's a toughie. If you want to come along, meet the team and do good, email us on info@CairoScene.com so we can count you in and send you our address. We're even teaming up with TBS to provide a free donut for everyone who donates. Who said we don't spoil you?

The blood problem breaks down to two issues; quantity and quality. Aside from the minute fraction of people who actually donate, out of that abysmal 1% statistic, "70% of them are involuntary donors," Abughattas tells us, which often leads to unsafe blood being given. Thanks to our brilliant health and education systems in Egypt, when people are in need of blood, public hospitals will exchange a single bag for a replacement of a much larger number due to their own shortage in supply, Abughattas explained to us. Naturally, in dire need, people will donate and collect blood regardless of whether they can or not, purely out of necessity. Essentially this means they'll lie on the donor application form or do whatever necessary to obtain the blood they need, leading to donation of unclean blood which benefits no one. Other situations involve payment in exchange for blood, where money trumps truth and donors lie on the form if necessary to obtain the payment. If you're a voluntary donor, which is what The Triple Effect is working to increase the number of, the need to lie is removed.

The Triple Effect aims to eliminate this situation entirely by procuring healthy blood. The project's name stems from the fact that the blood supply in Egypt needs to essentially triple in order to meet demand, that one donor can give blood three times a year, and that a single blood bag can save up to three lives. Despite this, the project doesn’t even place as much importance on the number of blood bags they collect but rather on raising awareness of the issue so that "people change their mindset so even if Triple Effect isn't there, they'll go and donate because they know its important," Abughattas explains. By getting more people involved, the hope is that it will create a ripple effect so that at the end of the day, people aren’t running around town looking for clean blood to save someone's life. The Triple Effect works in tandem with one specific blood bank, NBTS, which was set up by the Swiss government back in 2000, so all their regulations are entirely up to European standards. The Swiss still remain involved doing random checks.

The Triple Effect aims not only to secure the safety of the blood recipient, but also of the donor. Basically, no one's sticking dirty needles in your arms, and they won't accept your blood if they think you're at risk. If you've gone on a binge drinking session the night before you're giving blood, for instance, they won't accept it, not because your blood isn’t viable but because it might potentially affect your health to donate so soon after consuming copious amounts of alcohol. On the other side of the spectrum, once given, your blood "is thoroughly analysed after donation," an additional step post-filling out the application.

With more than 1 million people diagnosed with cancer yearly, and 25% of maternal mortality caused by severe bleeding and a consequent lack of blood to replace it, it might be about time we contribute. Channel your inner good Samaritan and do some blood giving. It'll cost you nothing.

You can check out their Facebook page here or folow them on Instagram @thetripleeffect. Email info@thecairoscene.online to get involved in our blood drive on Wednesday 13th August.

Tale of Us is flying in from Italy as part of Makadi Height's 'Out of the Blue' [...]
Week Month Year