What Does that Even Mean?

We "literally" "can't even" with these verbal trends. "Sorry, we're not sorry." 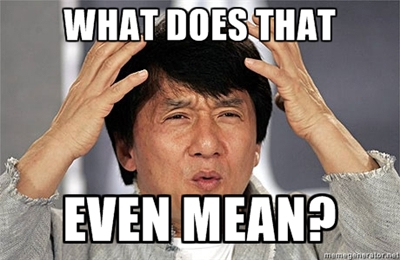 This has probably been the most repeated line amongst pre-pubescent teens (and some overly-scandalous adults) when trying to justify their nightly debaucheries. But let’s take a second to consider what this statement even means, and exactly how infused with bullshit it really is. We pass judgements every second of every day. A good looking male or female walks into a club and we determine whether they tickle our fancy. A boy with a burnt face walks passed us in the street and we have instinctually winced at what is out of line with “convention.” When our parents ground us, we judge them to be assholes. When our lovers leave us, they are bad people. In fact, when we ask that hilariously irrelevant question “where are you from?” we establish a judgment according to whatever answer we receive. Bottom line, spare us the line. If you don’t judge people, you don’t have a personality; and if you don’t have a personality, you’re really not justified in making normative statements.

We recognise it’s an internet trend, but for fucks sake it really makes you wonder how people passed their SATS. Not to be the language police, but have you ever heard of something called “redundancy?” If you are not sorry, why can’t you just say #imnotsorry, or better yet, don’t say anything. If you really want to be ballsy, try considering the parallel reality where maybe, just MAYBE, people can judge (oh yes, we used the “J” word) for themselves whether or not you’re sorry. Oh and lastly, technically, “I am sorry I am not sorry” kind of cancels itself out… so indeed, what the fuck does that even mean?

It’s a simmering summer’s day. –I can’t even.

The milk is expired! –I can’t even.

My work load is piling up! –I can’t even.

Lindsay’s in rehab again! –I can’t even.

It’s pretty self explanatory… you can’t even what?! What can’t you do? Unless someone is holding a jackhammer over your head, FINISH THE GOD DAMN SENTENCE!

We’ve all heard the ominous line that starts with “no offense, but…” that is usually followed by some back handed criticism about you. The reality is, you are fooling no one with such a lame attempt to frame the critique in a “non-offensive” manner. Stop kidding yourself, you’re definitely meaning to offend, and what’s worse, you know that what you’re about to say is in fact offensive. After all, why else would you begin the sentence that way?

This term has been overused in the wrong context so many times, that we don’t even clock on to how the sentence “LITERALLY” translates in terms of meaning. Consider the following:

“I literally got fucked!” (you failed an exam, so how on Earth does that involve sexual penetration?)

“I literally can’t stand it anymore!” (Unless you fell down on the floor and started having an epileptic fit as a result of whatever it was that upset you, you aren’t allowed to say something like this.)

So let’s just put it out there once and for all, “literally”, when placed before any sort of statement, means that what you’re about to say ACTUALLY happened; not in metaphor, not in manner of speech, but FOR REAL. So be sure to ask yourself before using the term; what does that even mean?