What Ever Happened to Magic Land's Dolphins?

Following our feature interview with accomplished animal rights activist Dina Zulfikar, Eihab Boraie digs deeper to find out how she took on Egypt's Media Production City to facilitate the release of their mistreated dolphin, Moataz. 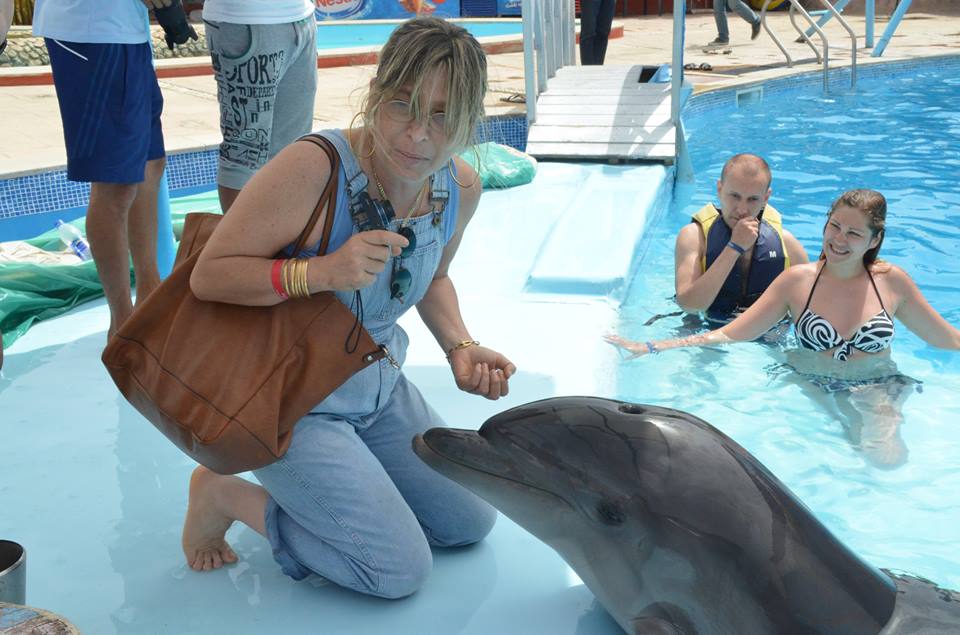 In the bustling, over-populated country that is Egypt, many do-gooders are pessimistic that they can actually facilitate true change. It is difficult and overcoming societal ignorance can take decades before enlightenment. However if you’re seeking inspiration, you can always rely upon the ever-courageous and outspoken animal rights advocate Dina Zulfikar, whose long list of accomplishments not only inspires others to follow, but also saves countless lives of the voiceless and abused animals of Egypt. One particularly inspiring tale is that of Moataz the dolphin who was born in captivity at Egypt’s Media Production City.

Before 2010, Zulfikar admits that she paid to go to Sea World; “I understand now that it was a terrible mistake. I didn’t know that these animals were suffering, but learned about it after attending a conference in Hurghada. I realised that even the poorest dolphinariums have to comply with standards, otherwise lives are lost.” The first step to implementing meaningful change is to educate oneself on the issue at hand; the second and most difficult step is to apply that knowledge. With a new appreciation for the plight of marine life, Zulfikar set out as undercover investigator into the suffering at Magic Land’s dolphinarium inside Egyptian Media Production City.

Understanding who is responsible for the dolphins is a tricky endeavor. “The Egyptian Media Production City is a free zone… it’s a big problem. A free zone is considered an international area where [people] are free to do what they want without intervention of customs authorities,” explains Zulfikar. In 2003, a suspicious deal was struck with Russians, whereby they would bring six dolphins to Egypt, along with a team of trainers and vets. Somewhere between then and 2010, the Egyptian Media Production City decided to rent the dolphinarium to the Emirates company Landmark. However, by then, only two of the six dolphins were accounted for, with the whereabouts of the remaining four shrouded in mystery, and conflicting stories of relocation or death. At that time, dolphins were being forced to perform five times a day for the noisy crowds. In an online post at the time Zulfikar writes:

“I was also told that the male dolphin is "mad" as described by the manager; he said, 'This dolphin sometimes hits his nose and head in the bottom of the pool that the trainer had to insert special material in its mouth. (I think the dolphin that acts this way is under great stress, not ‘mad’ as described).”

Zulfikar succeeded in reducing performances to twice daily, but the joy of this victory was short-lived as a more alarming issue came to light. To her horror, she found that the female dolphin was pregnant and performing, and no preparations had been made for her calf. “At the conference I learned from Naomi Rose [a senior marine biologist from the Humane Society] that if you have a dolphinarium, you are obligated to have a secondary pool for birthing or separating animals,” Zulfikar explains.

Hiding her true intentions, Dina Zulfikar went undercover; she became acquainted with the staff and trainers, learning that the female was due to give birth in a month and plans for a secondary tank were nonexistent. Zulfikar took her complaints to the veterinary staff; “I demanded that they stop performances until after the birth, and that they find a way to build the second pool for birthing.” On the eve of the January 25th revolution, Zulfikar was assured that her requests would be met, but as always in Egypt, it is hard to take anyone’s word as truth.

With the revolution in full bloom, the EMPC was closed, and the issue forgotten. It wouldn’t be until mid-2011 that Zulfikar was informed by one of the trainers that the mother dolphin had passed away after the calf’s birth, and he remained in the tank with his aggressive father, whose own condition was deteriorating. At that, Zulfikar was back on the case. Arriving to a deserted Magic Land, she found a dolphin trainer and his wife, who (despite being unpaid) remained, knowing that the calf would certainly die if they left.

Angered by the reckless disregard for marine life, Zulfikar desperately began seeking to ameliorate this nightmarish situation. Firstly, she had to discover who was claiming ownership of the dolphins. Zulfikar explains that “Landmark wrote on Facebook that the dolphins are in excellent condition, and that I was lying. I confronted them with evidence, and they responded that they intended to sue the EMPC due to closure issues related to the revolution, and leasing disagreements. They said that the dolphins were the property of the Egyptian Media Production City, and they were not responsible.”

The situation worsened in the following months. The restless male had passed away, and the calf had gone blind. Knowing that time was of the essence, Zulfikar approached the new chairperson of the General Organisation for Veterinary Services which supervises the zoos. She waited outside his office to make her plea. “I told your predecessor about these issues, and he deceived me. First the adults passed away, and now the calf is dying. Help me!” He immediately ordered a committee with two officials from the Wildlife Authority and one official from the Ministry of Environment. Meanwhile, Zulfikar attempted to engage the media to cover this atrocious treament of the final dolphin before it was too late; "I asked the BBC to come because it's something very important, it’s saving a life of a dolphin, dolphins are so precious. But they weren't given permission by authorities because it would bring up a huge issue with the EMPC about how they got the dolphin, and all the permit issues."

With a committee established, she was finally able to meet with the Chairperson of the EMPC. Even in the face of knowing that their last dolphin was dying, the soulless Egyptian suit still demanded compensation for his valuable animal. “He told us that he considers dolphins a commodity and it was worth X amount of money. If we wanted to rescue the dolphin, we had to pay. Then he said he had to discuss this with the board of directors. We discovered that they didn’t have a permit for a dolphinarium from the Egyptian Environmental Affairs Agency in the first place,” a frustrated Zulfikar points out.

Dina Zulfikar with the committee formed to negotiate the dolphin's release.

Clearly something shady lurked behind the legality of the dolphinarium, and rather than deal with a lingering investigation, their board approved the release of the sickly calf. With the end of one struggle, Zulfikar experienced the emergence of another pressing concern; where could the rescue calf be released? She explains that she learned [from Naomi Rose] that you cannot transport a young calf on a plane, as it would risk death, so she knew he had to stay confined to Egypt. Since he was bred in captivity, he couldn’t be released into the ocean, limiting their hope for a happy ending. After exhausting all options and with the ever threat of death present, Zulfikar made contact with a dolphinarium in Sharm El Sheikh that actually adheres to international standards.

The approvals and permissions were granted in December but Egypt was under curfew, which of course meant more permits. “We had to get permits to move something out of a free zone. The calf was transferred in a fridge used for moving meat between 11pm and 5am, because the tunnel going to Sharm El Sheikh was only open for a few hours. The trainer travelled with the calf to help him feel at ease. When they arrived in Sharm El Sheikh at 6am, it was the happiest news I’ve ever received.”

The calf, newly dubbed Moataz began his recovery in his new aquatic home, and Zulfikar of course continues the good fight for animal protection and conservation. Her proactive, super-heroinesque attitude has inspired many, and garnered a long list of accomplishments resulting in lives being saved and improved. Despite numerous success stories, Zulfikar refuses to rest, because in Egypt animals need all the help they can get.