Eihab Boraie heads to Ras Sudr's Kiteloop to meet with pro kite surfer and business owner Karim El Khashab to find out how he made his passion profitable, while the MO4 Fashion team captures his crazy stunts with riders' best friend, Quiksilver. 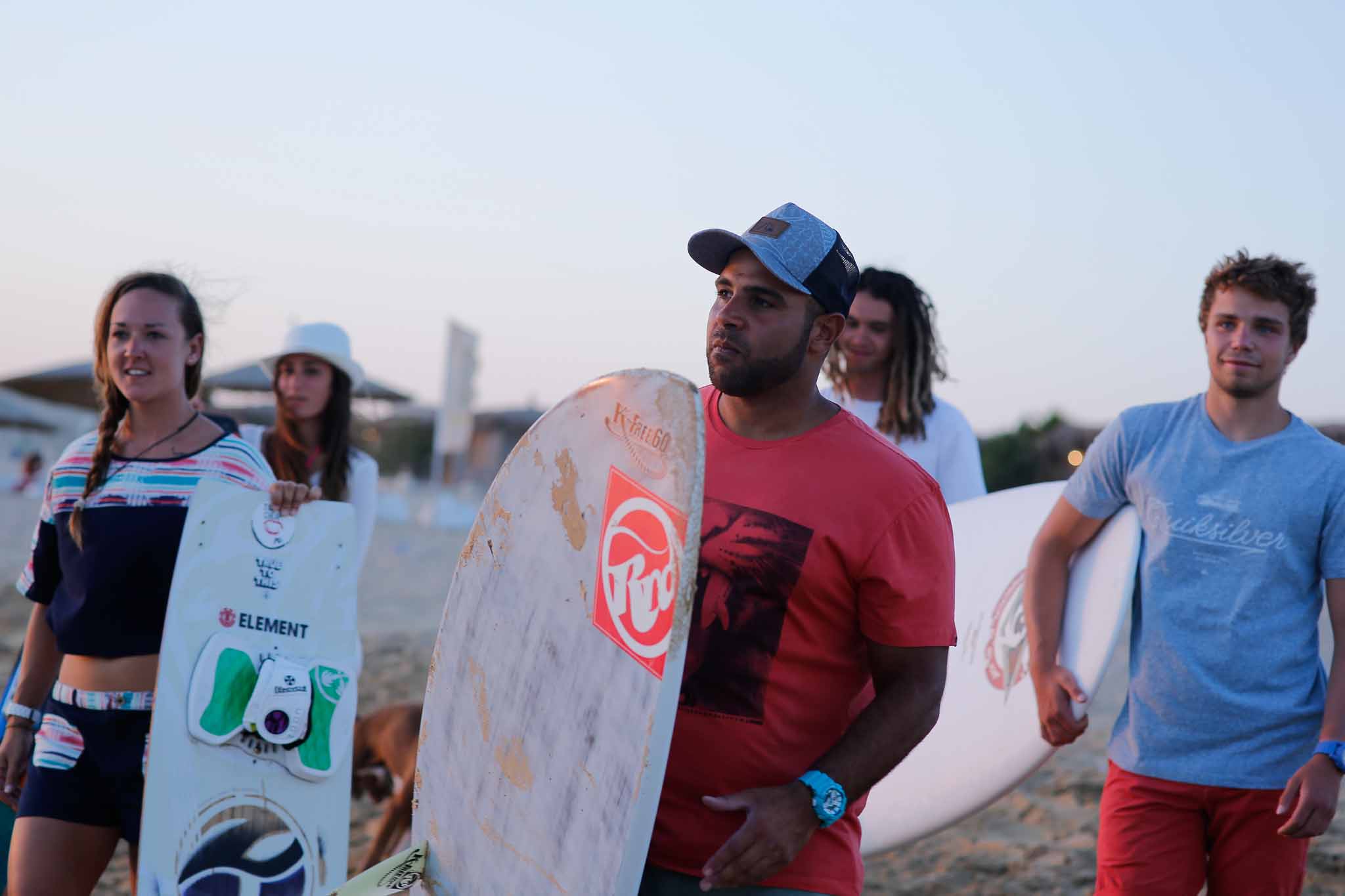 It is everyone’s dream to be able to turn passion into profession. Living that dream is none other than kick ass kite surfer and owner of Kiteloop, Karim El-Khashab, who took his love for kite surfing and turned it into a successful business. Driven by passion El-Khashab is not like most Egyptian business owners looking to turn a buck, but rather an avid rider more concerned with promoting and sharing his passion with his fellow countrymen. With a hectic schedule consisting of teaching, balancing books, interviewing new employees, posing in this kickass Quiksilver photo shoot with our MO4 Fashion team, and most importantly mastering his sport of choice, El-Khashab was generous enough to find the time to talk to me about the delicate balance required to be able to develop new tricks and turn high profits. El-Khashab's passion for kite surfing didn’t begin in Egypt, but rather Dubai when the former banker found himself mesmerised by the large colourful kites harnessing the force of wind and giving their extreme riders the ability to temporarily fly. As a doer, it didn’t take long for El-Khashab to go from observer to boarder to addict. In need of a fix, El-Khashab felt inspired and desired nothing more than to share his new found love with Om El Donia. Quickly finding a partner, El-Khashab set off to open Kiteloop, but first needed to understand the existing market and how to thrive within it. “I know there are a lot of kite centers in Egypt but they all go for foreigners and tour operators. My thought was that it could be a big thing if we developed a local clientele,” he explains.

In order for Kiteloop to be sustainable as a business, attracting local clientele, El-Khashab knew that locations would be the key. For many trying to justify taking a trip to more popular kite-surfing destinations like Gouna or Marsa Allam, a long weekend is required as they are simply too far from for a quick weekend getaway. Looking to make kite-surfing more accessible El-Khashab cleverly decided to open his operation in Ras Sudr, roughly 200km from Cairo. As El-Khashab puts it, “Ras Sudr grew pretty big in the past couple of years, because it is the closest option. It doesn’t have to be a public holiday for you to travel here as oppose to Gouna or Marsa Allam. People just come here because they are able to make it a hobby and can make it here every weekend.” As an amazing kite surfer himself, El-Khashab knew that locating closer to Cairo wouldn’t be enough, and made sure that Kiteloop's stretch of water would contain ideal conditions suitable for both beginners and experts. Finding the right conditions was not only key for the business, but also for El-Khashab who wanted the perfect place to master new tricks.

With a good location acquired El-Khashab turned his attention to making Kiteloop as convenient as possible for those devoted to developing their skills in what is being considered globally as the fastest growing extreme water sport. “Any kite-surfer that goes to a destination doesn’t want to be hassled with moving a lot between locations. At Kiteloop the rooms are two steps away from the beach, when you leave your room, you will immediately find your kite pumped and ready for you to get out into the water,” proudly describes the business owner. Aside from convenience, picking Ras Sudr as location makes it way more affordable. According to el-Khashab, “Ras Sudr is not really attractive when it comes to infrastructure as a town, so our prices are a bit easier when compared to the likes of Soma Bay. Aside from the expensive accommodations, you'll find an hour course in Gouna for like $50 and they take 8 or 9 students per course on one kite which is ridiculous! You learn nothing basically. Comparitively, our average cost for an 8 hour course is 2500LE and we take a maximum group of 4 on two kites with two instructors that give you more attention." Clearly passionate about spreading the water sport in Egypt, El-Khashab has made a few decisions that seem to run counter with the way business is conducted. Believing that his business will only succeed if Ras Sudr becomes synonymous with kite-surfing, El-Khashab did the unthinkable in the cutthroat world of business, reaching out to help his local competitors. “I mean if you're somewhere like Gouna, I wouldn’t bother helping out, as they already have traffic there and the competition is enormous! But when you're in remote areas like Ras Sudr, for example, I can’t afford to build 100 rooms at once but I can help the projects right next to me to increase the traffic. Increasing traffic in Ras Sudr benefits you one way or another, I mean, either people are gonna come chill out at night at your place and maybe have a bite to eat from the kitchen or they're gonna be enticed to try out the spot the next time they are in the area,” believes El-Khashab.

Reiterating that his passion for the sport outweighs his desire for profits, El-Khashab makes it a point to have Kiteloop act like incubator for young local talents who aspire to turn pro, going so far as sponsoring their development. “It’s rare to find an 18 year-old Egyptian who can convince his parents to be dedicated to sports and get paid for it. We managed to help Egyptian/Japanese Karim Shawky do that a couple of years ago. He came here for training camp for two months and we sponsored him afterwards, paid for everything like his equipment, his travels, everything,” explains El-Khashab. Thanks to Kiteloop's support Shawky quickly became recognised as one of Egypt’s best kite-surfers and now ranks internationally. With his career taking off, Shawky started getting large sponsorship offers from the likes Red Bull and Slingshot, but didn’t want to ditch Kiteloop as they were among the first to believe in his talents. Instead of playing the role as the disgruntled business owner who had his prize rider stolen from him, El-Khashab did the opposite, congratulating him on the success telling him: “Red Bull is the place to be so, good luck and I’ll be with you all the way.” Although some of these approaches run counter to traditional business practices El-Khashab estimates that “the amount of people we taught since the beginning of this season is triple the amount we taught last year, so the growth is enormous when it comes to kite surfing and bringing traffic to Ras Sudr.” The only obstacle left that needs to be overcome is combating the misconceptions that the Ras Sudr is unsafe, as the business managed to grow despite the catastrophic drop in international tourists in the wake of the 2011 January 25th uprising. “I mean, the most action we had in the past four years is our engine got stolen... And we got it back three days after, that’s it,” reaffirms El-Khashab of the safety of the area.

Throughout our conversation one thing was made clear; El-Khashab and his crew would do just about anything to see kite-surfing thrive in Egypt. From mastering tricks, teaching, sponsoring talent, and running a business El-Khashab approach may seem unconventional, and yet continues growing year after year. Perhaps the success is due to an investment in good karma or creative organic marketing. Either way, if you happen to start seeing more Egyptians competing internationally there is a good chance that Kiteloop and El-Khashab helped along the way.

Shot on location at Kiteloop, Ras Sudr by MO4 Productions.