Being yourself can be a perplexing proposition but #SpriteMixes are the best sorting hats! 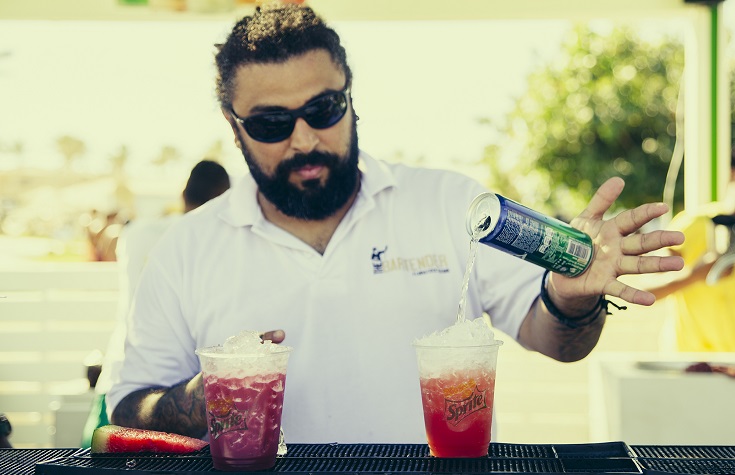 Sahel is tricky; all the beach body preparations that precede it, all the blisters, sunburns, and tasalo7’at that follow, and encounters with frenemies take a toll on your mental health and, before you know it, you are one of those people who say things like ‘yolo’ and ‘chillax’ and think everything is ‘the new black’.

This summer, we plan on maintaining our integrity at Marassi with #SpriteMixes. Every weekend, we will be keeping it real as we sip on Ray Al Ramahi’s kosher spin on Sprite with delicious creations, but, don't worry, if the gorgeous beach property is out of your league, you can always catch any of their roadshows in Sahel.You know how ‘being yourself’ never felt quite right? Well, that’s because you didn’t have the faintest idea who you are, dummy! A Sprite Mix never lies, which makes it the best indicator. So, what's it going to be?

El Sahel Sensation for the Overachievers

You can pronounce Blue Curaçao, otherwise why would you order it? You are smart, well-read, and well-informed, which explains your inclination for the finer things in life, such as rosemary and ginger, but you’re also a bit of a badass – hence the lemon syrup. You are an entrepreneur of some sort; you are calculating and scheming. You are the Mark Zuckerberg of your social circle.

Spicy Peach Lemonade for the Divas This grandiose concoction of red hot chili peppers, puréed peach, sweet and sour sauce, and Sprite is not for the faint of heart. If the mere sight of you puts the fear of God into the Beckys with the good hair out there, and if you run your life like a savvy – and often dirty – politician, this is the summer refreshment for you!

Cucumber Mint Cooler for the Chilled Out You are chill like the cucumber and mint infusing your elder flower and Sprite mix, but you know when to play hardball – hence the few dashes of sweet and sour sauce. You are a lone wolf. You don’t do drama, you don’t do petty rivalry, you don’t do selfies, you don’t do who-wore-it-betters, and you don’t do jealousy. You do Netflix, long swims, and Haruki Murakami.

Mixed Berry Punch for the Bosses So you have a sweet side – because cranberry juice – but you’re obviously mean as a pitbull – because mixed berries – and the sweet and sour mix only adds acidity to your already powerwoman persona. You embrace your reputation as a shrew and live up to it, you make grown men with balls of steel cry like little kittens and you don’t apologize for getting shit done. You do radical feminism, tough love, and you call a spade a spade.

Cinnamon Orange Pie for the Rebels

Cinnamon is a wintery drink, so if you go for this cinnamon syrup-based cocktail, we know you’re a non-conformist. The fresh orange wedges and the sweet and sour sauce brewing in your Sprite appeal to your acerbic nature. You are the kind of person who only comes to Sahel to make a statement; you are quick with the jokes and quips, but even quicker with the burns!