Women Who Dare: the Girl Gangs of Cairo

Rahma Zein El Din hits the road with three of Egypt's most confident and fearless women who have decided to smash stereotypes and steer their own freedom - all on two wheels... 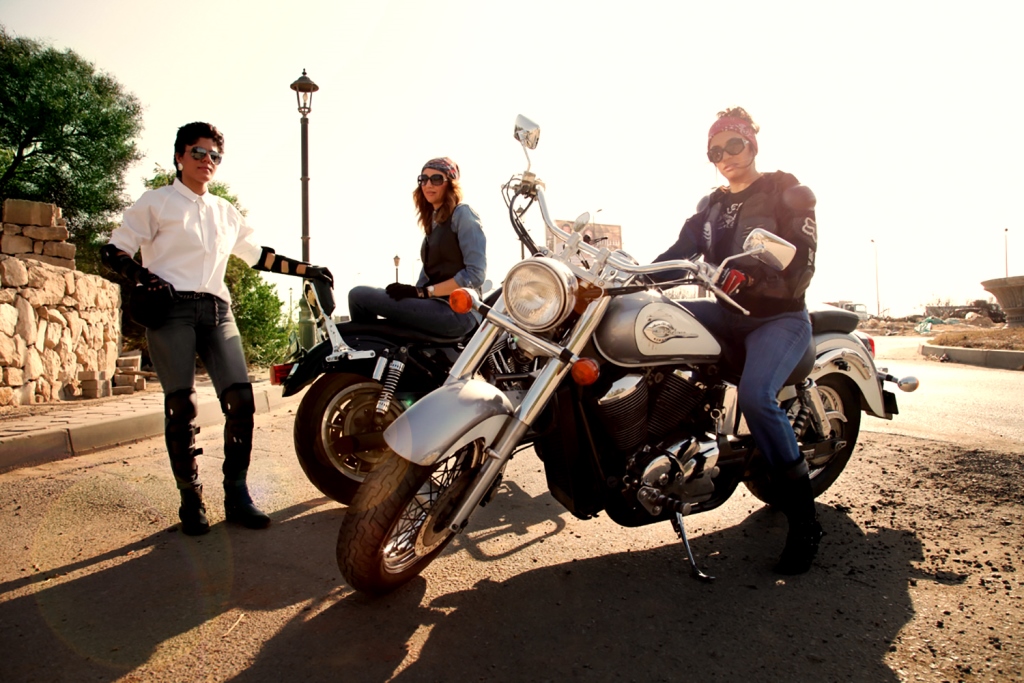 They’re daring, they’re strong and they are on a mission. With engines roaring and hair fluttering majestically in the wind, Dina Khattab, Rana El Harti and Rana Sabry pull up to meet us on location with a flurry of confidence trailing behind them. Embodying the modern woman, all decked out in the suitably durable iconic denim brand Levi’s, these enigmatic self-assured females have taken it upon themselves to dispel the assumption that female motorcyclists are anti-tradition and, ultimately, un-Egyptian. But what’s more Egyptian in this day and age than taking your freedom into your own hands?

Talking to them in their element, we quickly find out that it isn’t just about looking cool on a bike; the responsibility they’ve delegated to themselves is to smash the stereotypes about a woman’s place in the public arena, self-expression, adventure and, surprisingly, the economy.

The age-old maxim of ‘never judge a book by its cover’ applies perfectly to Dina Khattab. Soft spoken, calm and composed, you would think that she spends her afternoons having tea with the Queen. That, however, is not the case. She is a diver, a Latin dancer, an IT manager and is currently learning how to play the guitar. “I love to learn. If I like it, I continue. I never say no because I love the challenge,” she explains. Different aspects of her personality truly shine when she gets on her roaring Harley, demanding respect. “I used to just be a passenger when I would go with them on the rides but then I didn’t want to be so dependent. I decided to learn and get my own bike,” she continues while putting rolling up her Levi’s denim sleeves and putting on her leather gloves. “When I ride I forget everything. If I’m upset or stressed, I get on my bike and forget...Besides, it’s fun to get dressed up in your gear and just go.”

Adventure sports lover Rana El Harti supports the notion that all women should take on a challenge that takes them out of their comfort zone. She insists that they’re not just pushing forward a feminist cause, but an economical one too. “The government says they wish to work on traffic and reducing fuel consumption, and this Vespa the perfect way to do that. Whether it’s a woman riding it or a man really doesn’t matter,” she explains, tucking her classic blue Levi’s jeans into killer biker boots, making for the most comfortable ride. When pressed to speak about the challenges faced by her and her gang of girl bikers, she remains optimistic and ready to live up to the responsibility of someone who wants to affect change. “It is the pioneers who take on the struggle. And actually, it isn’t as bad as people think. If we continue to grow in number, it will push people to accept this. I want people to understand that there’s nothing a woman can’t do. We are the ones who create mental blocks for ourselves. If these mental blocks weren't broken we wouldn't have female doctors, female engineers,” she says with passion.

“But I’ll tell you what’s worse than harassment; street safety. You can be riding and suddenly find a hole in the middle of the road, and trucks ready to run you over,” El Harti continues. However, her confidence never waivers whether she’s on the road or not.  “If people want to talk about you, they will talk if you’re on your bike or not, and if you succumb to everything that Egyptian society tells you, you won’t do anything at all.” Also a rally rider, El Harti paints the full picture telling us that there’s a ton of encouragement with people giving them thumbs up and giving them space during their processions. “Listen, life is short and I want every day to count. This is my imprint on Egypt.” And she’s certainly left her mark.

“My mum would tell me ‘take your hair out of your helmet so that they know you’re a girl,’” Rana Sabry tell us, with a cheeky eye roll. With scathing wit and untamed hair, the 25-year old oozes confidence and the good old-fashioned cool factor, made complete with her white Levi’s button up shirt. Having been riding bikes for five years now, her road experience shows as she circles us with ease, showing off a few tricks only confident riders can pull off, without ever losing her sense of humour “You know that famous scene in Titanic when they stand on the boat and Leonardo Di Caprio is standing behind Kate Winslet as she spreads her arms? That’s how it feels. You have your music, the wind… It’s a beautiful feeling,” she says with a laugh.

The idea that it’s a jungle out there for female bikers seems to be a challenge these women have already overcome as we delve deeper into the topic. “It’s tough but it’s worth it. One time I had a mother come up to me and tell me she wants her daughter to ride too, so there’s encouragement and you feel proud that you’re changing this perception,” continues Sabry with a gleam in her eye. “I know how to fix my bike. You need to be able to know how to deal in case you stop in the middle of the road. You can’t leave the bike, it’s not like a car. And I’m not going to wait for a man to help me!”

Shop the shoot and get all items featured in these photos now from Levi’s stores at Citystars, Cairo Festival City, Mall of Arabia, Grand Mall Maadi and City Center Alexandria and visit their Facebook page here.