The next World Cup is going to break some big records this year, and we're not talking about the number of goals scored. The sums being offered to the next champions are literally jaw-droppingly stupendous... 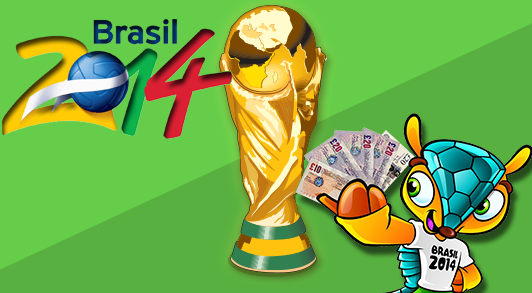 The players at this World Cup will be exerting an excruciating amount of effort on the pitch, battling through blood, tears and sweat personifying their patriotism. What could be more motivation than a whole nation behind you dying to have you lift up that golden trophy at the end of the tournament, and the prestige of being part of the best team in the world... well how about €720,000 each?

That's how much reigning champions Spain stand to gain if they win the world cup, a 20 percent increase from their successful run out in South Africa in 2010. If Spain makes it through the first knockout round this year, the players and staff will receive 72,000 euros, while for a semifinal appearance the bonus will be 180,000 euros and for reaching the final they would receive 360,000 euros each.

Meanwhile Brazil and Germany are set to gain €330,000 and €300,000 respectively. England will actually have been offered more, who will pocket €430,000 each for a final win, but they should probably be offered the same amount just for scoring a penalty, for once. And if you have an imagination, if Nigeria win, they stand to gain €100,000, significantly less but then again, there's significantly less chance of an African team getting through to the last rounds. Cameroon had been offered up to €68,000 per player, which they turned down as they were looking for something more like €180,000 which again is ridiculous because it all seems a bit fantastical.

As for coaches, to put these numbers into perspective, USA coach Jurgen Klinsmann will be diving into a pile of between $500,000-$10.5 million dollars depending on his side's progress.

In conclusion, too much money being spent for a bunch of people to kick a ball around but what's new? Let's at least hope with these sums of money they really show up and perform to make this a highly entertaining World Cup. Aside from the local FAs, FIFA themeselves are offering up their largest bonuses to date for the teams who progress as follows:-