James Asquith started his adventure right here in Egypt years ago, and now he's back for a third visit. 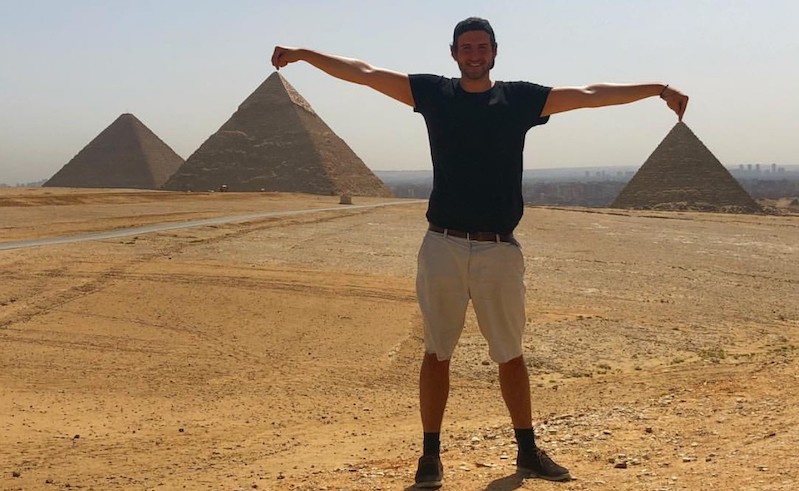 Wanderlust – which is the strong desire to travel – is a phenomenon that has plagued this generation of millennials. Just like those who came before us had their own thing, or that one defining trait; we’re defined as a generation of travellers and wanderers claiming the world as our unexplored treasure. There is an element of romance in simply picking up and leaving everything behind; not paying heed to anything but your wanderlust. For UK national, James Asquith, that shared millennial dream is a reality. Having broken the Guinness World Record for being the youngest person to travel to 196 countries before turning 25, his first solo trip was to the land of the pharaohs, Egypt.

“I stayed about 2 weeks. I went to Alexandria, Sharm El Sheikh and Cairo. It was my first trip by myself and from that point on, I’d picked up the travel bug,” says founder of travel app, Holiday Swap.

Breaking a Guiness world record was never something that the UK national had planned to do. However, growing up with a father that was constantly travelling and a mother who was quite the explorer herself, Asquith jokes that he must’ve have always had it in him. “I always used to travel and I guess I got carried away. Initially I never set out to break a record. My dad was a pilot and my mum was always a bit of an adventurer so I guess I always had the travel bug in me,” explains Asquith of his childhood. “I did a bit of travelling with my dad on some of the routes particularly to Damascus and to Beirut – they were incredible. I enjoyed the Middle East a lot and I think it’s a fantastic destination. But as for breaking a record, I was probably 21 or 22 at that point, I‘d gone to around 100 countries and I was like hey I can do it.” Returning for the third time to the destination that witnessed his beginnings as a world traveler, Asquith’s made it to Egypt under the Experience Egypt campaign in conjunction with the FIFA World Cup, as well as the #ThisIsEgypt campaign, and to follow up on the status of his travel app, the ex-banker tells us of his favourite aspects of the city that never sleeps.

I began to appreciate how we’re all different but the same.

“Everyone speaks of New York as the city that never sleeps but Cairo is definitely up there,” explains Asquith. “I grew up in a big city so I love buzzy cities. And Cairo is definitely louder than London. A Sunday night in London would be relatively quiet but when I was at my hotel here on a Sunday night, there was so much going on outside. There was a party and boats on the Nile with flashing lights. Cairo is like the beating heart of Egypt and I love the vibrancy. And Egyptians are really friendly. They always want to talk to you, to have coffee with you. It’s just so lively.” Having visited the religious complex, the pyramids and Khan El Khalili among other sites, Asquith finds the country’s charm to be in its culture and the city’s metropolitan streets.

If someone trips over, it’s funny in all cultures.

“Istanbul is known as the place where east meets west. But I think the same applies to Egypt. There’s so much European culture to it and so much middle eastern culture, especially in Cairo," says Asquith. “It’s that mixing of cultures that is unique to it. The only place that I’ve been that’s similar to it is Bosnia (Sarajevo). It also has a fantastic history and in Cairo, you’ve got the religious complex which hosts a mosque, a church and a synagogue all in one place and it’s pretty spectacular that people mix as one. That’s something about Egypt that a lot of people aren’t aware of."

Leaving the banking industry behind almost a year ago to start up a travel app with the aim of encouraging people to travel more, the influencer started his Instagram account in 2016, which was a while after he'd already started travelling. The perks of the recent surge of social media channels and apps is that beneficial information and little tips and tricks are now more accessible to aid those who want to travel, be it on a budget or otherwise. “Holiday Swap - which recently won the best apps award - is in over 100 countries. And we’ve launched in Egypt. It’s something that I've always wanted to do. I didn’t want to be a banker, and I'd only did it for a while to make money in order to continue my travels. With the app, I wanted to encourage people to travel more," says Asquith of the motive behind his travel application. “It allows people to swap their houses for one dollar per night. You kind of match up with people. It takes away the biggest cost of travel which is accommodation and that leaves more pocket money for you to actually do what you’d like to.”

Travel for every reason, it’s a great release. It’s probably the time when we’re the best versions of ourselves, I think.

Proclaiming that people actually have more in common than they do that sets them apart, Asquith tells us of his first trip with friends which was to South East Asia.

“When I went to Vietnam, we were in the Mekong Delta. Not many people spoke English there and we didn’t speak Vietnamese. Yet everyday we’d sit with the locals for lunch and dinner and despite the language and cultural barriers, a lot of things were still same. The same little things we'd all find funny for example. It doesn’t matter where you go, if someone trips over, it’s funny in all cultures. You give someone a smile and it’s received in the same way anywhere.” Famous author of the Adventures of Huckleberry Finn, once said that “travel is fatal to prejudice, bigotry, and narrow-mindedness.” As the world continuously witnesses an increased globalization with cultures and traditions melding into each other, it becomes somewhat necessary to advocate a more tolerant mentality.

“Looking back at myself now, I was a young kid who was very naïve to the world. I had preconceived notions of how people are. I didn’t necessarily appreciate how different we are. Eventually, I began to appreciate and love how we’re all different but the same. Travel was the best education I'd ever gotten, better than in a classroom or anywhere else,” says Asquith. “Most of the time people just see what they see on the media but when they travel, it's different.” “Travel for every reason, it’s a great release. It’s probably the time when we’re the best versions of ourselves,” concludes the record breaker. “It’s a time when we are more free in our minds and our inhibitions might be lower as well. Just book a ticket and go for it, try and see.”