The Rabbit Hole: Passing Down Memories and Cleaning Up the Clutter

Being a hoarder isn’t fun for anyone involved, and luckily for us encumbered Cairenes, there’s a place that gives your stuff a new home. 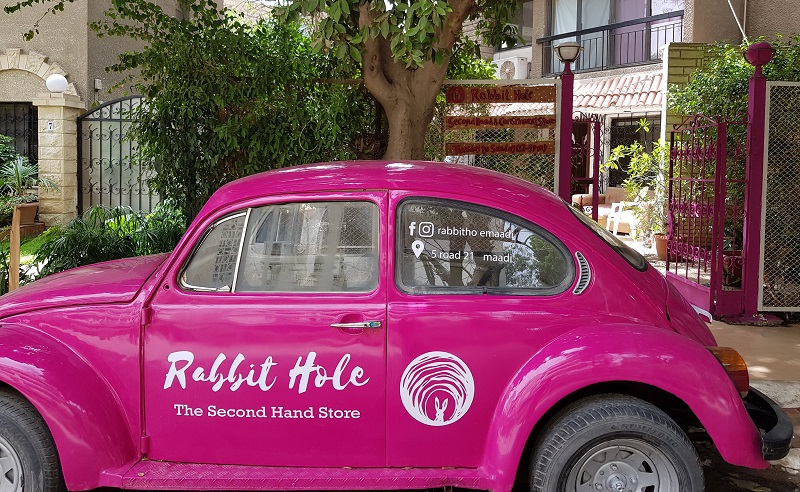 Think back to all those times when you had to let go of some of your belongings; those outdated chairs that nobody bothers to sit on, your “fancy” silverware that you hardly ever break out, or that damned nuisance of a vase your aunt gave you back when Britney Spears was still relevant. We’re bred to hold onto everything we’ve barely ever used, just in case a stray scenario waltzes into our periphery and necessitates the use of the most abstract objects we have, and when we feel like it’s time to make room, we just throw it all away in a dump somewhere, mucking up the universe and depriving others in need of something valuable. It was this horrendously repetitive phenomenon that inspired local creative and all-around good person Nora Labib to dig up the Rabbit Hole; Cairo’s burgeoning halfway home for all things unused. “The idea is to basically help reuse and save ourselves and the environment the money and effort that is spent on new things. Allowing people to use things they like and having more ease of motion for items they’re no longer fond of or use, creating more variety and style for less money and hassle.” Nora explained regarding her concept for the Rabbit Hole; a second hand store of sorts that houses people’s unused items on a consignment basis, putting their previous belongings for sale based on an agreed upon price, and once everything is said and done, the previous owner gets their dues, the Rabbit Hole takes a cut, and the buyer walks out with a new bit of swag. Everybody wins. “The kind of things we sell could be anything from a single fork for 2 EGP to a designer dining set for 100,000 EGP, and everything in between. Of course, the pricing depends on the owners, condition of the items and the demand.” You can find all sorts of treasures at the Rabbit Hole; Nora just managed to get her paws on one of Amie Sultan's belly dancing outfits, so there's some more incentive. Concepts like the Rabbit Hole are in dire demand here in Egypt; countless expensive items are thrown away willy nilly, items that others spend ages to even come close to obtaining. But through the Rabbit Hole, everyone gets a chance at something valuable on the (relative) cheap. “Young people who are just starting out on their own or with their partners can have access to things they need without having to pay a fortune, and people who want to move don’t have to store the things they once used. It’s just a good bargain for all involved.” The idea came to Nora after moving around a fair bit between houses and even countries, so she obviously couldn’t schlep everything she had from one place to another that often. The way she sees it; there are tonnes of people with bulky things they don’t need, and these people are dying out quick, so why not give both their items and younger generations a second chance at a better life? Nora also believes in the power of repurposing stuff you no longer see a use for; “For example, our very dear neesh (credenza for you uppity sorts) can become 4 different and useful pieces. The quality of its materials could be used to make something else entirely, with endless possibilities for what you can make and how you can use it. That’s where all the fun is.” In the not so distant future, Nora will be hosting workshops at the Rabbit Hole to teach folk how they can go about restructuring their old stuff, and in a matter of months, the Rabbit Hole will have its very own costume rental section, so you can stay stylish on a budget. Hopefully, Nora will also open the Rabbit Hole as a production house of sorts, where she’ll employ her knack for filmmaking and directing to make films as well as other productions, using the materials the Rabbit Hole has for improv events and so on. So if you have a bunch of stuff you don’t feel like holding onto (and we know it’s hard to let go), you feel like giving your old rubber duck a new home, or if you just feel like browsing some pretty neat stuff from all corners of Cairo, check out the Rabbit Hole’s Instagram and Facebook page, give them a call on +201016612262 or 0225199668, shoot them an email at rabbitholemaadi@gmail.com or just pay them a visit at building No. 5, Street 210 in Maadi. Just look for the pink beetle.